Dinosaur in My Yard

Anyone who doesn't believe that birds descended from dinosaurs has never taken the time to watch turkeys.
As I was finishing my morning ablutions, I glanced out the bathroom window to see something large and dark wallowing through the snow. It was a turkey. 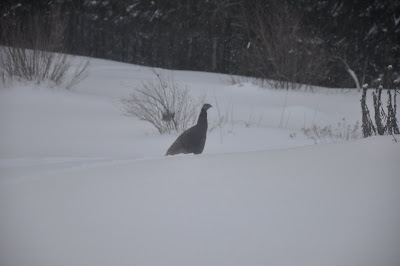 Just one turkey. This was odd, because I rarely see turkeys in the singular; they are usually in groups. Even odder was the fact that this bird was in my yard. It had to have flown in, because I have a five-foot fence around the yard (which in the winter is sometimes only a two-foot fence). It must've come in to check out the offerings at the birdfeeders, and finding them not to its tastes, it mosied on.
By the time I grabbed the camera and found an unfogged portion of the window through which I could see, it was picking up speed. I suspect it felt something was watching it, for it quickly shuffled along and vanished behind the shed.
I moved to another window, waiting for the bird to appear on the other side of the shed, but no such luck. Either it stopped where I couldn't see it, or it took off and flew into the woods.
According to the wildlife experts, back when I was in college, turkeys couldn't survive in the Adirondacks. Well - I imagine they are all eating crow now, for turkeys not only survive up here, but they are doing very well, thank you, their numbers increasing every year (or so it seems based on the number of birds seen along the roadsides all year).
When I was a kid, it was a rare event to see a turkey. I think my first bird was one I saw on a biology field trip when I was at Geneseo. We were at Letchworth State Park, and we watched a couple turkeys fly (!) up the face of a waterfall. It was impressive. That was the early '80s.
By 1995, when I had moved back to central NY to pursue my master's degree, turkeys had become fairly common-place in the cornfields around the house. I even bought special seed for them, but they weren't interested in it - who'd eat old seed when there was fresh corn in the fields?
Now-a-days turkeys are a dime a dozen.
I had an beau in college who used to go hunting. He shot a turkey one year around Mother's Day and decided we should give it to my mom. So we drove to my parents' house, roommates all in tow, and presented her with the bird. I suspect she was more surprised than pleased. But the mighty hunter cleaned the bird, she cooked it, and we ate it. The thing I remember most is that the bird had a deeper and narrower breast than a domestic turkey; Mom wasn't sure it would fit in the oven. And it was mostly dark meat (I never understood the preference for white-meat; give me dark meat any day), and as I recall had a kind of sweet flavor.
When I worked at the zoo, we had a flock of wild turkeys that would tour the zoo grounds, mostly in the morning before we opened to the public. It was here that the similarity between these birds and their saurian ancestors became apparent. Perhaps this was because the movie "Jurassic Park" had come out and had scenes of bipedal dinos running in flocks across open fields. Whatever the source, a flock of turkeys rapidly crossing an open space, especially in the early morning fog, sure looks like a flock of bipedal dinosaurs.
Don't believe me? Then stake out a flock of turkeys yourself and take up turkey watching. I guarantee that you will soon conclude that dinosaurs are still alive and well here in the 21st century.
Posted by Ellen Rathbone at 10:46 AM

Email ThisBlogThis!Share to TwitterShare to FacebookShare to Pinterest
Labels: turkeys