Brrr! It was -9*F overnight, -7 when I got to work. The frost had made beautiful pictures on the porch windows. 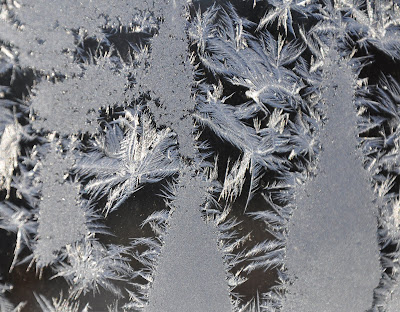 The trees looked like rock candy on a stick: 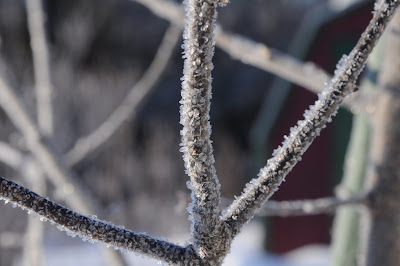 And the birdbath was steaming away. I watched a bluejay land on the post earlier, then hop down to the edge of the bath to get a drink. I'm glad I invested in this heated treat for the birds. Even though I don't often see a bird at the bath, I know they use it. It's gotta be better than eating snow for moisture! 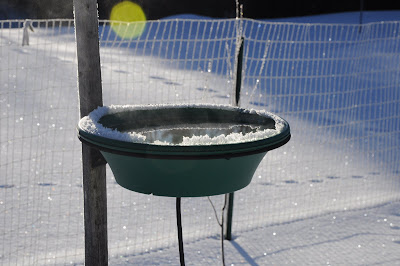 I had my first official tracking class of the winter today, and it couldn't have been nicer weatherwise. The cold of the morning had worn off and conditions were great. I had 14 participants (!), and they were a great group, some local and one couple who drove over four hours this morning to get here before 10:00! 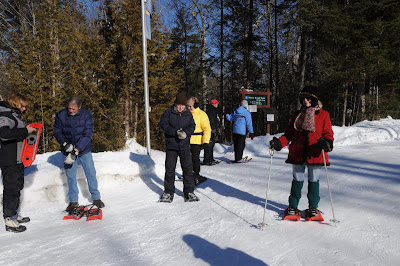 Most of our tracks today were squirrel, hare, mouse, fox and coyote. Overall, nothing too exciting, but the tracks were all very nice. Here is a typical example of what we saw - a nice series of snowshoe hare tracks that tell a story: 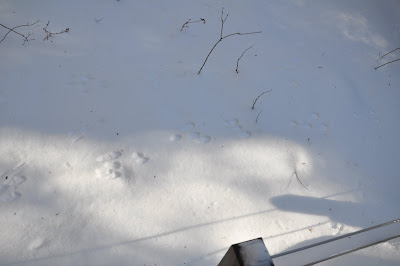 You can see where the hare came along, slowed down and stopped. It sat for a moment, hopped again, and stopped, perhaps to nibble on some twigs (we did find some nice hare browse in another location with similar tracks). Then it hopped off once more, and gathered speed (the tracks stretched out) before stopping again (off the photo). 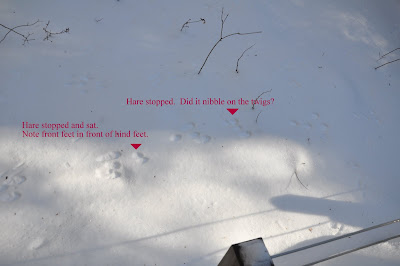 Here we had a really nice set of snowshoe hare tracks. The animal hopped and stopped, sitting with its front feet in front. Note how widely the toes are spread on those back feet! 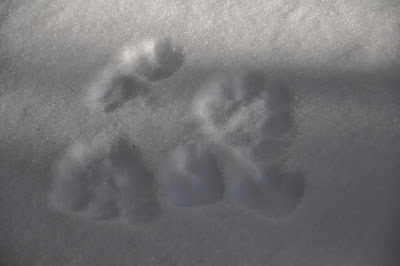 These coyote tracks that passed under the bridge, crossing from Graveyard Bay to the outlet of Rich Lake, were a pretty nifty find. At first I was trying to describe the set on the right: the animal possibly loping and then galloping. But in some of the sets, there looked like five or six footprints, not just four. Something odd was going on. Then one of the participants piped up: didn't you say that the coyotes often travel one behind the other? Couldn't this be multiple animals loping/galloping and they just aren't quite in synch? By golly, she was right. 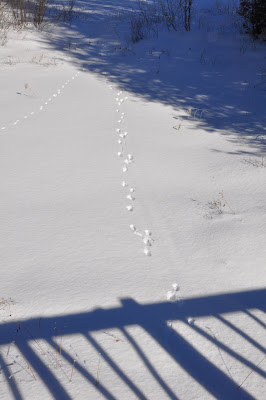 Then we took a closer look at the trotting tracks to the left. They are nice and neat, but about every third one is doubled: two footprints. Again, we believe this was multiple animals, and one wasn't quite on target with the tracks of the first. 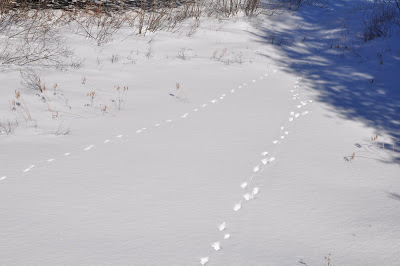 My next tracking class for the public is 27 February, 1:00 - 2:30 PM. Meanwhile, my school tracking programs start in two weeks. I've had a chance to brush up now, so I'm ready to begin the Snow Patrol season.
Posted by Ellen Rathbone at 1:44 PM