We also saw a number of dragonflies while on our walk along the bike path. They were soaking up the heat from the pavement, but did not want to wait around while we tried to sneak up on them to take their photographs! 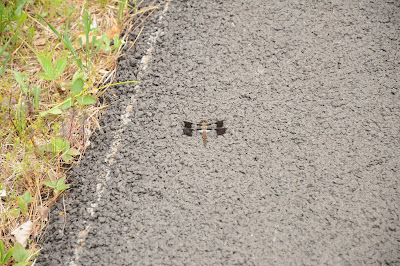 Not that this deterred us - no. We continued to try and sneak up on the things, and finally I was able to capture a couple shots.

In this first, we see what I believe is a male common whitetail (Libellula lydia). The wing patterns certainly match for this species, but the abdomen is what is throwing me. The male common whitetail typically has a pale blue abdomen with the white marks on the sides. I wonder if this one simply is too newly emerged to have reached its full coloration. 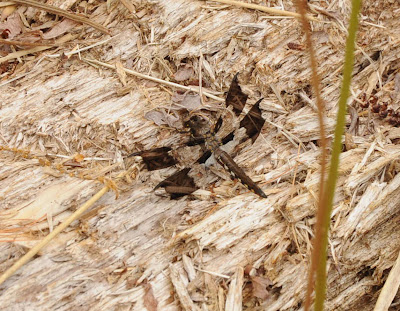 I'm pretty sure, however, that this is a female common whitetail. I was able to ID her first, which led me to look up the male for the above ID. If there are any dragonfly experts out there who would like to chime in on this, please do so. 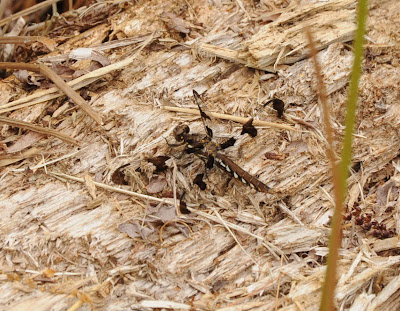 Meanwhile, the common whitetail is a percher, who often perches on the ground (as these were doing). The males are territorial and very active around their breeding sites. This could explain why they were so difficult to sneak up on. They are fairly tolerent of disturbed areas, so it isn't too much of a surprise they were along this bike path. Streams are one of their preferred habitat types, and a lovely babbling stream ran all along the bike path. All of these clues lead me to believe that these are indeed common whitetails, despite suspect abdominal coloration.
Posted by Ellen Rathbone at 3:30 PM

Email ThisBlogThis!Share to TwitterShare to FacebookShare to Pinterest
Labels: dragonflies