Back on the Trails

As mentioned in the previous post, early coralroot is a saprophytic plant. Saprophytes are dependent on other things for their food. Well, it turns out that there is a lot more to the story. This plant is actually a myco-heterotroph, which means that it is only partially dependent. Here's the scoop.

Early coralroot does have cholorphyll (I told you yesterday that I thought its saprophytic-ness was suspicious because the plant is green), and it is, therefore, capable of providing its own carbon by making food from sunlight. However, it isn't great at this sunlight conversion thing, so it has to get supplemental nutrients from another source. Enter the fungi. This orchid is having a long-term relationship with fungi from the genus Tometella. In this symbiotic relationship, the orchid is the parasite, taking nutrients from the fungi, which neither benefit nor suffer from the partnership (or at least not that I could find in my research).

The plants are not blooming yet, but I thought I'd throw in this shot I took last year of the flowers. They are VERY small. 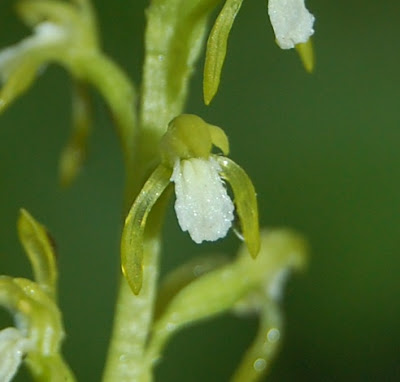 Alrighty, then - back to the plants from Peter's walk on Saturday. I went back out this morning and got a few more photos - the wind is barely tickling the leaves today.

First up we have false Solmon's seal (Smilacina racemosa), aka: wild spikenard. The false Solomon's seal can be told apart from the real Solomon's seal by the flowers. On the false ones they form a foamy cluster at the tip, while on the real ones they appear as single bells hanging below the leaves, along the underside of the stem. 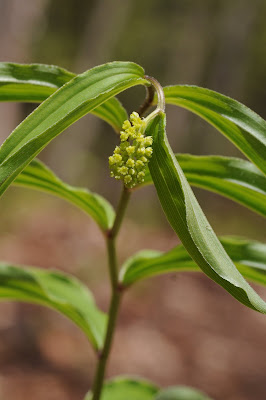 Even though the flowers are not open yet, up close they are still quite lovely. When they open, they will be an airy, frothy plume. 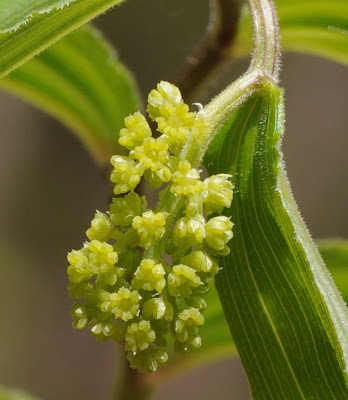 I revisited the white violets in hope of clarification on their ID. Well, looking at the leaves, I'm inclined to say they are indeed northern white violets, not the sweet whites as I previously thought. Note that many of the leaves are broader than they are long - a real clue to the ID of northerns. Maybe the "slicked back" petals were a result of the flower's age. 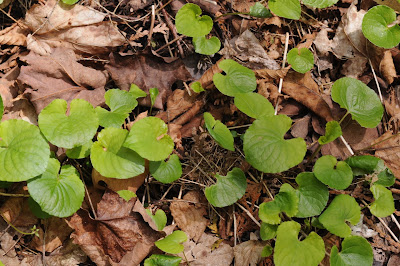 Further along the slope, though, I found this white violet with extremely hairy leaves and stem: 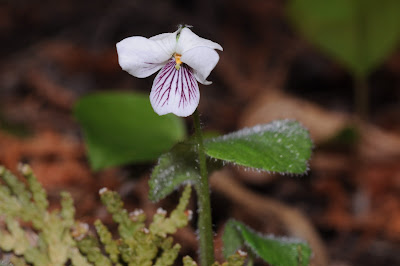 Here's a good view of the leaf's shape: 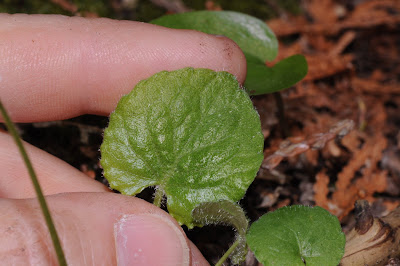 ...but look at how hairy it is! I'm hoping my friend Jackie will chime in on the comments and explain what it is we have here - she is, after all, the Violet Queen. 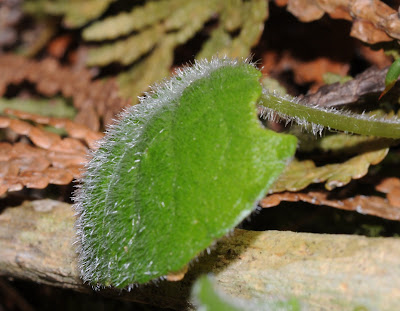 Next I hunted down the twisted stalk from Saturday's walk. Here's the conundrum: I know we have rosybells, or rose twisted stalk (Streptopus roseus), but I've never seen the white version of twisted stalk (S. amplexifolius). A key to ID is the leaves. On the latter, the base of the leaves actually clasps, even wraps around, the stalk. On the former, they don't clasp. Additionally, the latter has a whitish bloom on the underside of the leaves, where the former is simply green below.
I took a good look at these leaves. While they are close to the stem, they do not really clasp it - the lower lobes do not wrap around, or hang past, the stem. Additionally, when I peeked at the undersides, they were definitely green, not white. 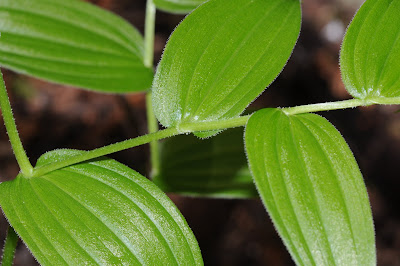 Next, I looked at the flower buds. Rosybells, as you no doubt guessed, have pinkish flowers. Twisted stalk has greenish flowers. So, I think what we have here is indeed rose twisted stalk (rosybells). One or both of these is/are edible, at least in the berry department, although the literature suggests one should be cautious as the fruits have a tendency to act as a laxative. 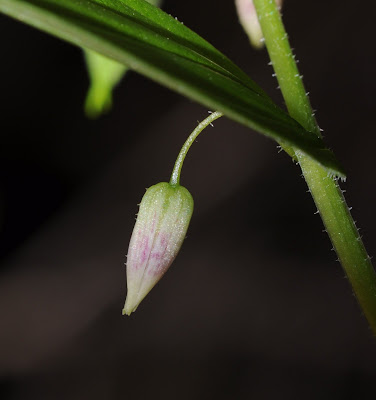 Yesterday, while Toby and I were walking the Sucker Brook Trail, I noticed this plant just getting ready to bloom: toothwort (Dentaria diphylla). I love its other common name: crinkleroot. This plant is a member of the mustard family. 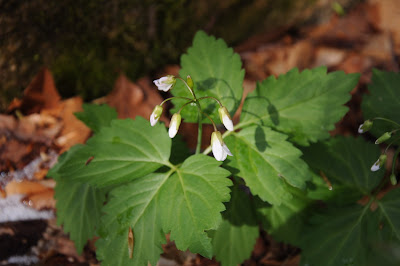 According to Native American Ethnobotany the Cherokees used to cook them up with other greens and eat them. Here's a close-up of the flowers, which by today are probably completely open: 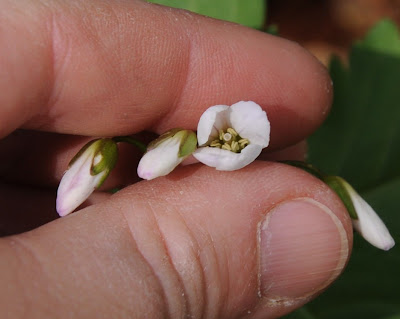 So there you have it: some clarifications and something new.
I wonder what tomorrow will bring...
Posted by Ellen Rathbone at 1:30 PM