Friday the sun rose on a beautiful day. The omens were good for a botanical bonanza with my buddy Jackie. I drove down to Saratoga to meet her, and we piled in her car for a whirlwind tour of some of her favorite plant places near home.

First, we stopped at Yaddo, an artists' colony located right near the Saratoga Racetrack. This facility is privately owned, but the public are allowed free access to the gardens. We parked the car and headed across the well-groomed lawn, taking in the majesterial grandure of the mansion as we did so. 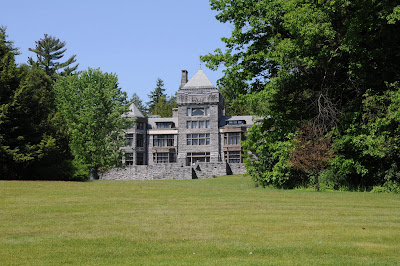 The first plant on our list was this lovely birds-eye speedwell (Veronica chamaedrys). This large-flowered speedwell is a non-native species, but its bright blue blossoms are a delight to the eye. 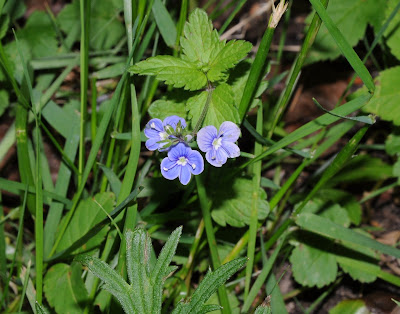 We found this lone specimen of pale or cream violet (Viola striata). A lovely native violet, it stood all by itself at the end of a shady bed of rock garden plantings. 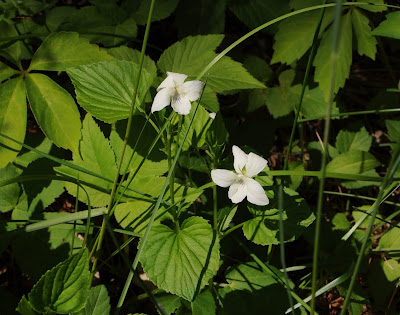 While we were here, we saw several gardeners out and about, putting out mulch and getting the gardens ready for the summer season. The water features, however, were dry as a bone. I guess we were a little too early for them. 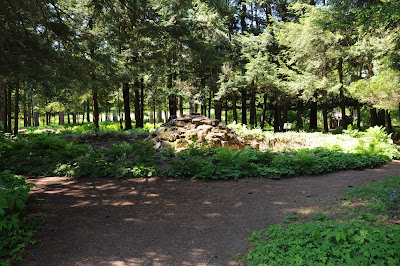 The boxed thing you see in the center is a caged statue. This isn't done to keep the statues from running away, but to protect them from the snow and ice of winter. Every statue we saw (or didn't see) was crated. 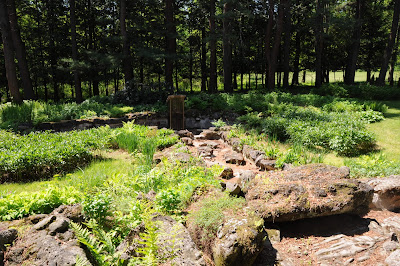 While Jackie brought me here to see the many native wildflowers that are grown on the site, I was equally drawn to the many rock garden plants that were flowering. I have no idea what most of them are, but I loved their colors and shapes. 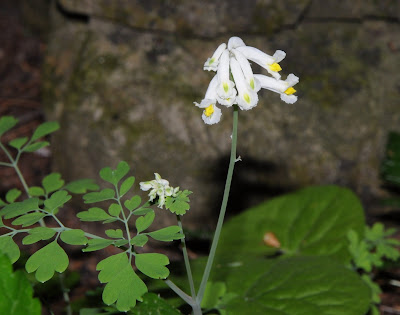 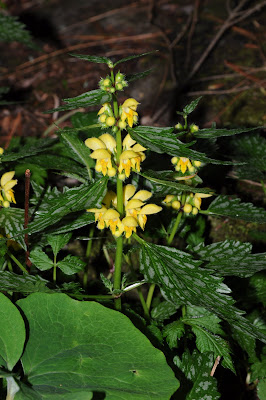 Here we have one of Jackie's favorites: celandine poppy (Stylophorum diphyllum). Many of us are probably familiar with celandine, which is a non-native plant with a sticky orange sap, but celandine poppy is 100% American. Here's something interesting I read about this poppy: its seeds are distrubuted by ants. 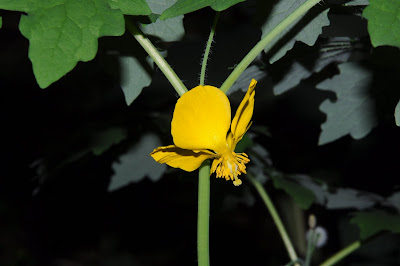 And here we have a poppy pod just starting to ripen. 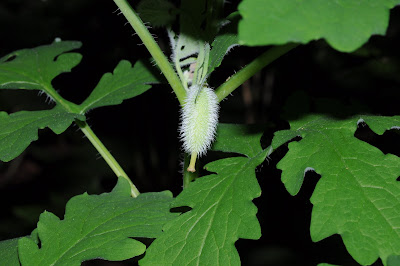 Another native growing well here is wild blue phlox (Phlox divaricata). I'm not the world's biggest phlox phan, but I did like these, mostly because their color was unusual...and difficult to photograph! 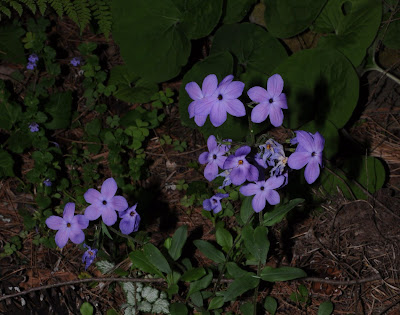 There were lots of white bleeding hearts in bloom, but we also found a few of this wild version: squirrel corn (Dicentra canadensis). If you are like me, you are probably wondering how this plant came by its odd common name. It turns out that it grows small tubers just below the surface of the ground that resemble kernels of dried, yellow corn. As for the "squirrel" bit, well, I can only guess that it is because squirrels bury things and these tubers are found below ground. 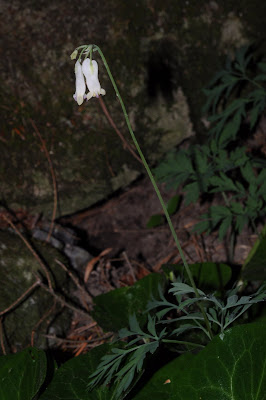 Aren't these leaves beautiful? They look like the wings of a large butterfly or moth, but sadly, they have a very dull common name: twinleaf. Its scientific name is a little jazzier, Jeffersonia diphylla, but not much. The flower, which has already come and gone, looks similar to that of bloodroot. I think we should start a movement to rename this plant, maybe something like "angelwings" or "cecropia plant." 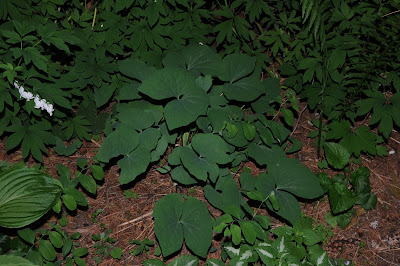 I was totally fascinated by this grapevine artwork. The plant is actually rooted in the ground along the wall here. I imagine that this was sculpted over the years as the plant grew. 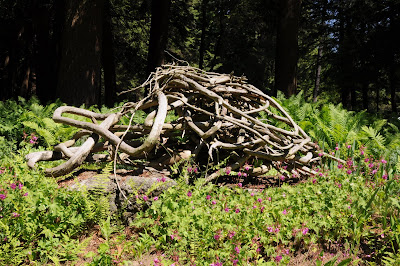 Another garden plant, this dwarf crested iris was the sweetest, tiniest iris I've ever seen. 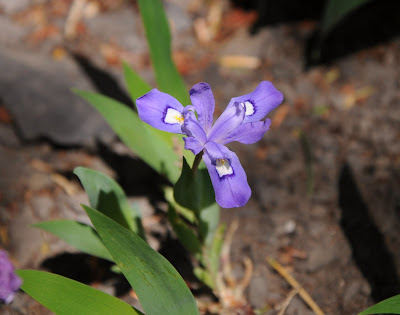 Another garden flower, which Jackie thinks might be a henbit. The flowers were unusually shaped, and the leaves variagated - what wasn't there to admire? 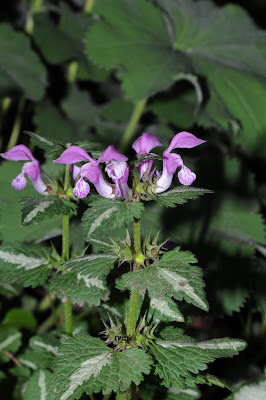 This little snapdragonish plant, according to Jackie, grows in a vine-like attitude. She's seen it climb walls and trellises. Here, it was nestled among some rocks by the dry "stream." 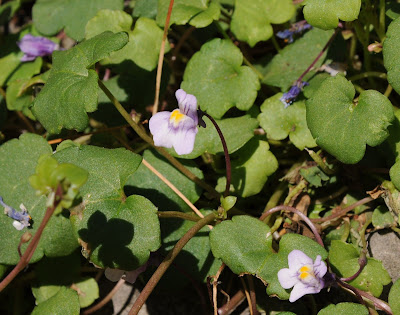 We made our way around to the rose gardens, for which the place is apparently well-known. As you can see, there wasn't a single rose in bloom yet. 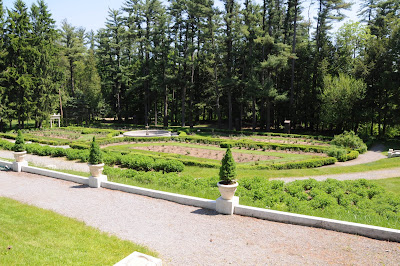 But this didn't stop our explorations. Jackie and I were on our hands and knees along the mulched rose beds looking for and photographing these tiny tiny speedwells. Who needs flashy roses when these delicate flowers were blooming nearby? This one is purslane speedwell, or neckweed (Veronica peregrina). It is a native speedwell, and its flowers were maybe 4mm across. I wonder where the name neckweed comes from. Hm. 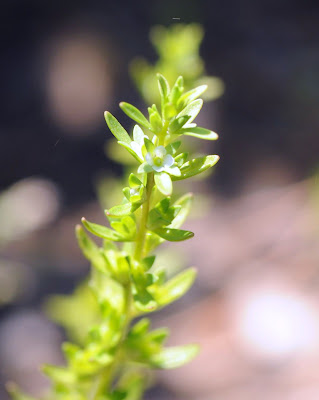 Right next to the purslane speedwell was corn speedwell (Veronica arvensis). It's hard to believe, but its tiny blue flowers were even smaller than the white ones above. This speedwell is not native, but it doesn't seem to be terribly aggressive, so we didn't feel guilty admiring it. 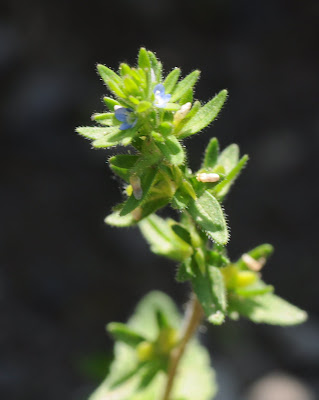 As we left the gardens, we looked up to note that the shagbark hickory (Carya ovata) was blooming, too. It's been years since I've seen one of these - we just don't have them in the central Adirondacks. 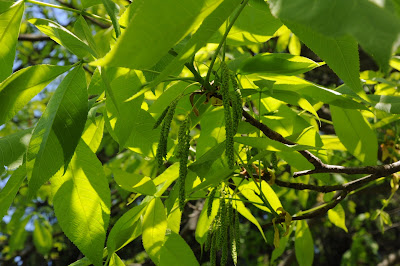