Out & About with Peter O'Shea

Saturday we had our monthly walk with Peter O'Shea, our guest naturalist. Peter, a retired police officer from NYC, has adopted the Adirondacks as his personal habitat, having moved up here in the '70s in his search for wildness. His explorations of the Adirondacks and its environs has led Peter to write two books about his adopted home (The Great South Woods and The Great South Woods II). Just about every month you can find Peter leading a nature walk along one of our trails.

Saturday's topic was the early wildflowers of spring. We lucked out because the day had been rainy and blustery, but the sky cleared and the sun shone brilliantly during the three hours we were on the trails (as soon as we got back to the building, it poured).

So here he is, Peter V. O'Shea, expounding on the back deck before we hit the trails. 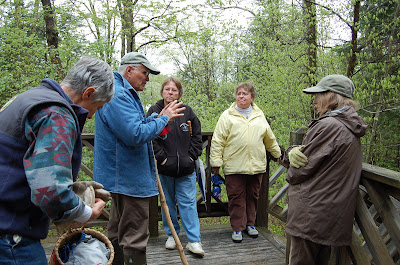 One of our first finds was foamflower (Tiarella cordifolia), aka false miterwort. Foamflower is only just starting to bloom, and the recent cold snap has slowed down its coming out. A member of the Saxifrage familiy, this small woodland flower has become popular with the gardening set, with many horticultural varieties now available, each with a different colored leaf and some even with colored flowers. In our woods, we get just white flowers, but sometimes we see some nice variations with the leaves. 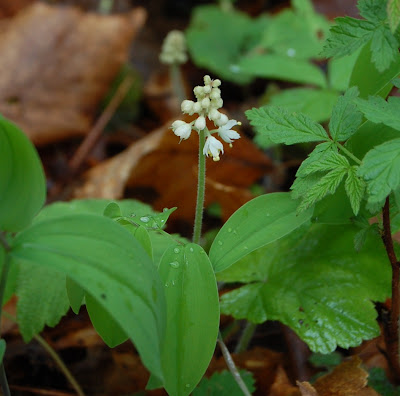 Canada mayflower (Maianthemum canadense) was all about the forest floor, but not quite yet in bloom. Also called wild lily of the valley, this small member of the lily family is quite common. 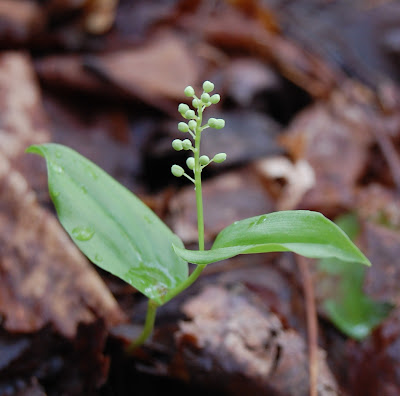 The purple trilliums (Trillium erectum) were still in bloom and looking quite well. 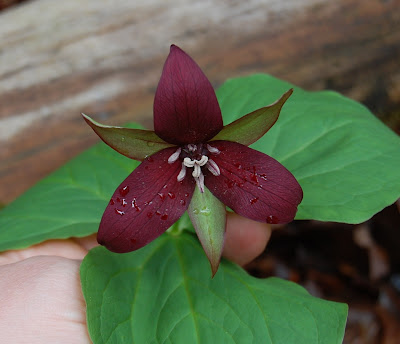 Sasparilla, or more accurately wild sarsaparilla (Aralia nudicaulis) should be opening up in the next couple of weeks, too. Usually, these plants have three bundles of flowers. If you look closely at this photo, you can see that the third one has been broken off. A member of the ginseng family, this is the plant from which the drink of western movies was made. Some of the native peoples made wine from the berries, others made beverages from the roots. I believe the drink of B-movie fame was made from the roots. Other native uses are many, including poultices for burns, tonics for colds, an infusion for fainting, and a tonic for purifying the blood. 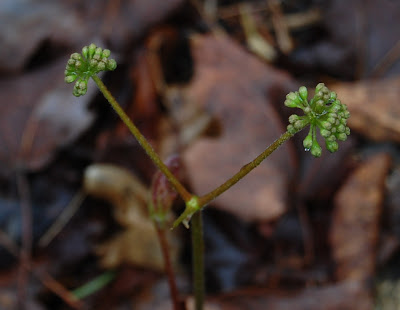 These small white violets, which I belive are sweet whites (V. blanda) were growing on a wet slope along the trail. Northern whites (V. pallens) and sweet whites are often confused with each other. The former has a flower that is less than a half-inch long and its leaves tend towards being broader than they are long. On the other hand, sweet whites grow in rich woods (the northerns prefer streamsides), and typically their top two petals are swept backwards, as though slicked back with some Dippity-doo. Sweet whites also have leaves longer than they are wide, with a bit of a point to their tips. I'm going to have to go back out and investigate these some more, too. 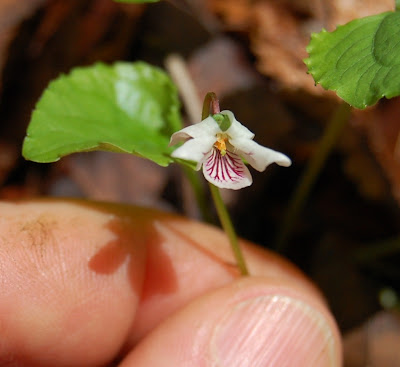 At a distance we saw this nice specimen of twisted stalk (Streptopus amplexifolius), aka white mandarin. Peter also called this plant "liver berries". I know that we have rose twisted stalk, aka roseybells, but I didn't know we had the white variety. I want to go back out and take another look at this plant...I'm having doubts. Stay tuned. 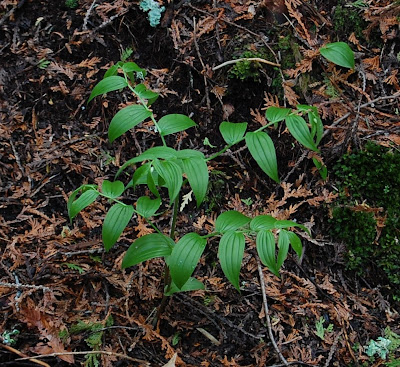 Down at Pickerel Pass, the bridge that connects the "mainland" to the peninsula (which is an island when the water levels are high), we found sweet gale (Myrica gale) in bloom. These delightful spikey red flowers are the female flowers of the plant. The male flowers are golden-brown catkins; I was so caught up in these beauties that I didn't even look for the others. 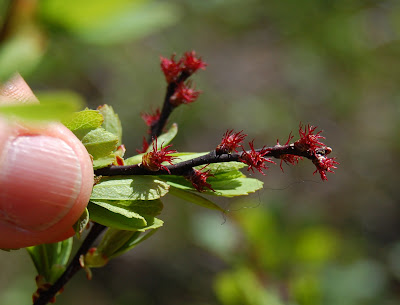 In the same wetland, we had a couple small clumps of bluets (Houstonia caerulea), also called innocence and Quaker ladies. These can often be confused with creeping bluets, which are a slightly darker shade of blue, with lots of little rounded leaves. 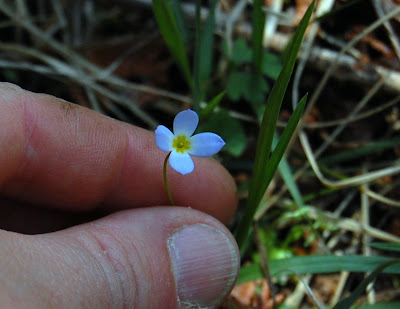 One of my favorites, early coralroot (Corallorhiza trifida) wasn't blooming yet, but their gorgeous bright green stems were up. These are saprophytic plants in the Orchis family. As saprophytes, they get their nourishment from dead or decaying matter. What's odd is that these are green plants, which usually tells us cholorphyll is present, the basic foodstuff of plants. HM. Methinks I need to do a little more digging on this plant. 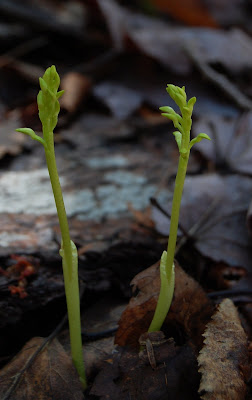 The wind prevented me from getting photos of the other flowering (or near-flowering) plants we saw, but I shall head back out on the trails and see if I can get better photos today.
All in all, it was a great walk with plenty of flowers blooming to make the trip worthwhile.
Our next spring wildflower walk (shameless advertisement here) is Saturday, 22 May, at 11:00 AM. If you are in the area, I hope you will stop by and join me for an easy stroll along the trails as I search for more of the season's bounty.
Posted by Ellen Rathbone at 11:54 AM