We wound our way through a literal maze of roads that meandered through the woods...but can you still call them "woods" when every acre along the road is home to a McMansion? Some of these houses rivaled the mansion we had just left at Yaddo. One looked like it belonged on the Italian coast, another had a bronze, life-size, grizzly bear beneath the pines out front. Another had a wind-swept horse at the front and back gates (it was on a curve in the road). Apparently the developer put in this nature trail we were headed towards as part of an agreement when he built these estates. Whatever the reason, I'm glad this patch of land was spared. 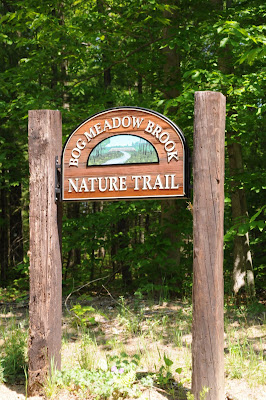 The Bog Meadow Brook Trail heads downhill through a northern hardwood forest, across a short boardwalk that spans an arm of wetland, and then follows an old railroad bed with wetlands intermittently on either side, terminating next to a lovely open wetland. Jackie was leading a flower walk here the next day and wanted to see what the latest bloomers were so she'd be prepared.

The first plant I gravitated towards was one of my favorites: northern maidenhair fern (Adiantum pedatum). 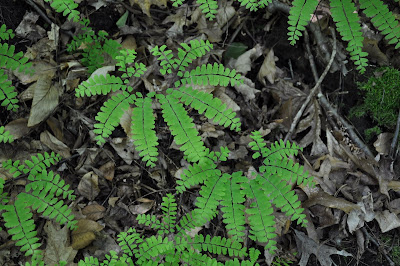 Just like milkweed and a few other plants, I just can't photograph this lovely fern enough. 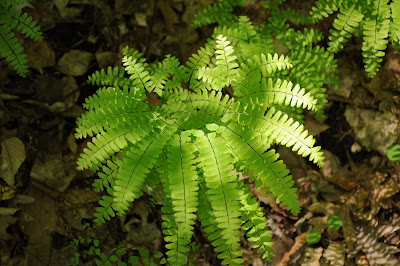 Another one of my favorites, and now in full bloom, is mayapple (Podophyllum peltatum). You may recall I posted photos of this plant as it was just emerging from winter's slumber about a month ago when Jackie and I walked around Moreau Lake. Well, here it is, leaves unfurled like umbrellas above its single white flower. 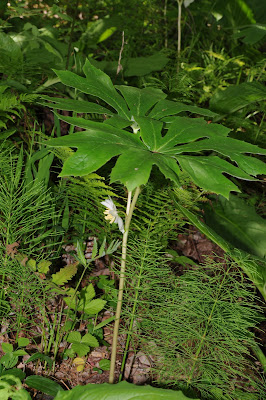 Isn't that one of the loveliest flowers you've ever seen? When I was living in NJ (for all of 4.5 years), there was one state park (I think it was Jenny Jump) that was literally carpeted in mayapples - it was one of the loveliest things I'd ever seen. Some of the plants were so big they rose above my knees. 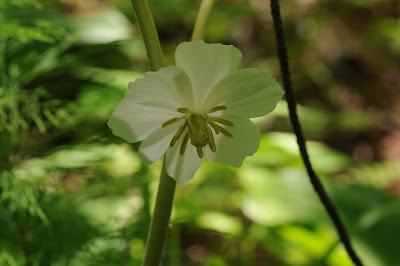 We left the forested slope and stepped onto the boardwalk, where I immediately saw another of my favorites: water avens (Geum rivale). This was a new plant to me about the time I started this blog. 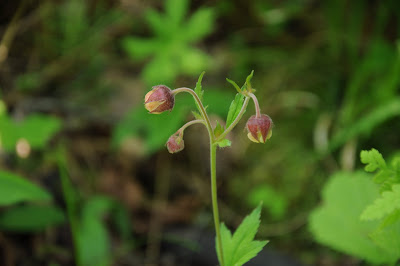 Isn't this just a delightful, but bizarre-looking, flower? 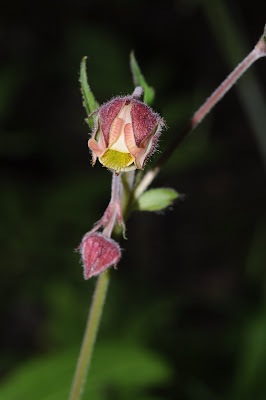 The tree may be long gone, but the stump left behind is full of life. It's a nursery stump, providing a home to many young plants. 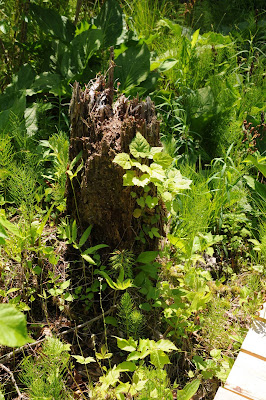 We had our eyes peeled for a woolly rush, which we found later on in the walk, but I didn't photograph it. I did snap a shot of this plant, however, which I believe is some kind of sedge. Whatever the name, it is a lovely plant. Not all flowering plants have lovely showy petals. Some are not even going to grab your attention unless you get really close, like this sedge. Small and unassuming, it is still interesting to behold. 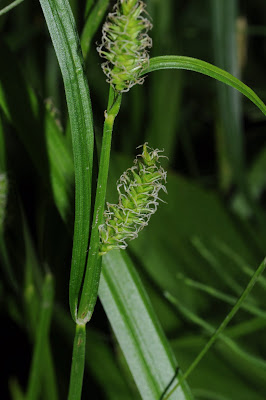 Leaving the boardwalk behind, we headed down the old railroad bed. Parts are still paved with the ties, while other sections are bare ground. But the entire length is a tunnel of green. 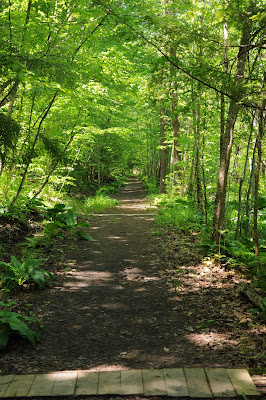 Sandworts seem to be one of the big bloomers right now. Well, "big" is a relative term, for the flowers are quite small. Tuesday I made acquaintance with thyme-leaved sandwort, and today I met blunt-leaved sandwort (Arenaria lateriflora), which is one of our native sandworts. It was blooming in great profusion, dappling the low greenery with its star-like flowers. 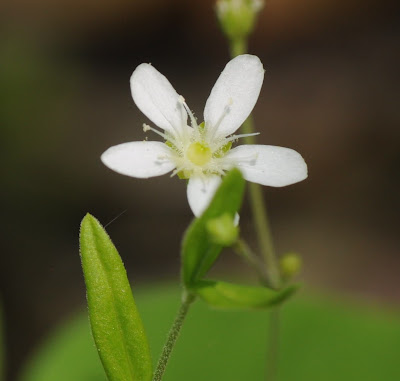 Now, you might think this flower is a blackberry, and you wouldn't be off by too much, for it is related. This is dewberry (Rubus flagellaris), a low-growing plant. 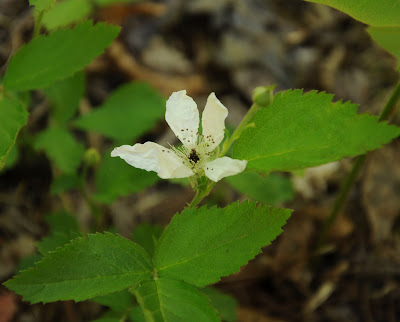 Most variegated leaves can't hold a candle to the patterns of the rattlesnake plantains. This one is downy rattlesnake plantain (Goodyera pubsecens), and later in the summer it will sprout a spire of small orchid-like flowers. The flowers are nice, but the leaves are great. This plant isn't found in any great abundance, so it is a treasure whenever one sees it. 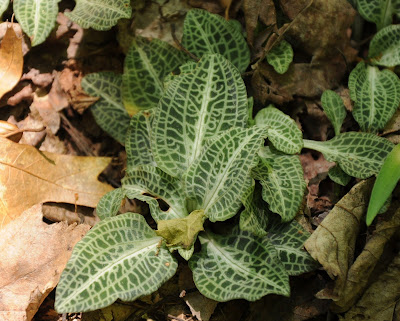 Again, we had a specific target plant on our list today: the nodding trillium (Trillium recuravatum). Now, I know some folks might think "you saw them on Tuesday, why get excited again today?", but they are such a rare plant that it's okay to get excited about them every time you see them. And see them we did - we must've encountered close to a dozen nestled among the nearly exhausted red trilliums. 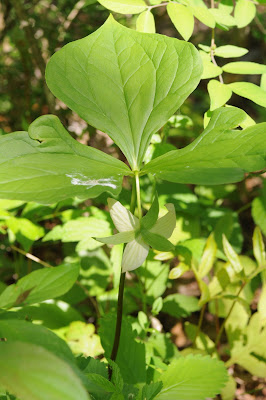 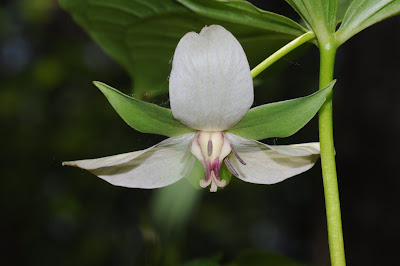 Jackie has seen them a number of times now, but even so, she still has to photograph them when they meet. 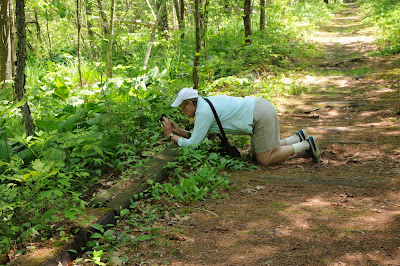 Wild sarsaparilla (Aralia nudicaulis) usually has flowers in sets of three - three little balls beneath the triple leaved umbrella. This plant was an over-achiever, sprouting SEVEN flowers. Neither Jackie nor I had ever seen such a thing before. A classic over-achiever. 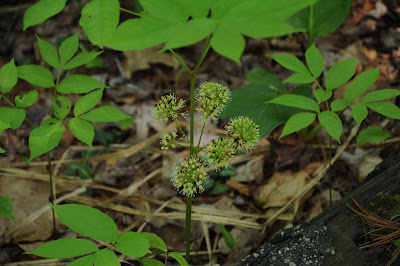 Yellow clintonia (Clintonia borealis) is just getting going. This photo just does not do the plant justice. While a lone plant was spotted here and there, we did come across a patch along the trial that was completely carpeted with them. 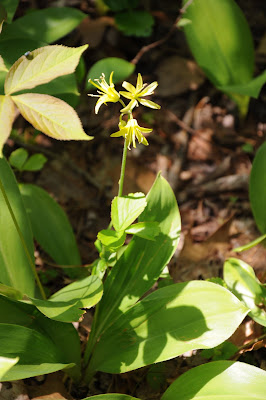 Looking out across the wetland in one of the few places with a view of the water, we noticed that spatterdock (Nuphar variegatum), or yellow pond lily, was in bloom. If you click on the photo and enlarge it, you may just make out patches of them. 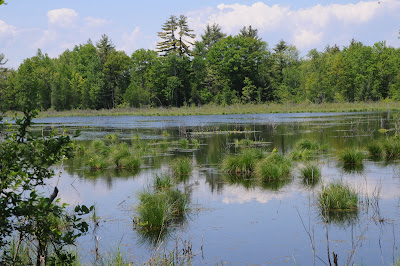 Our final target plant for this trail was poison sumac (Rhus vernix). It was nailed by a late frost, so many of the leaves were black and shrivelled. But new green growth had sprouted forth - Mother Nature is hard to completely deter. 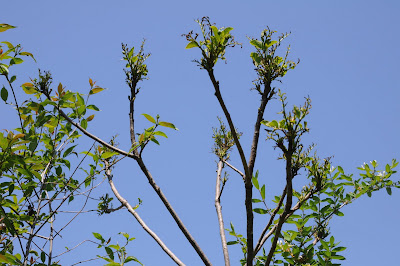 After viewing the sumac, we hightailed it back down the trail and to the car - we had two more sites to visit.