Pick Me! Pick Me! 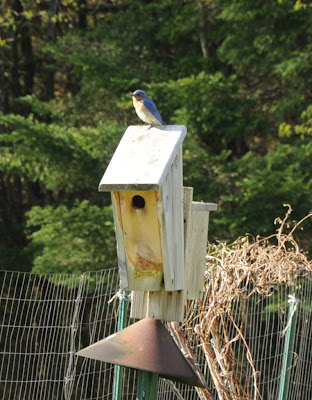 Every spring it's the same thing. First I hear a bluebird, then I see one or two. Before I know it, they are checking out the possible nest sites. I eagerly watch as they investigate my boxes (I have five on my little acre of land - way too many, but I want to be sure they have options). "Pick mine, pick mine!" I think each time I see them fly across the yard or perch on the fence or boxes. So far I've had bluebirds every year, but you just never know.

This year there seem to be a LOT of bluebirds in town. I've seen them on the golf course, at my neighbor's house, in my yard, and at the community garden (where they put up three boxes, but all the boxes are "wrong" - poorly built and already the roofs are coming off, no ventilation, and one doesn't even open so it can be monitored - ah, the concerns of a bluebird ambassador).

I captured this shot this morning while I was eating my breakfast on the back steps. Such a handsome fellow! (Pick me, pick me!) I even got to watch him flirt with his (potential) mate - he does this wing flapping thing while perching near her. Apparently this is a bird version of flexing his muscles to impress the girls. Hopefully she's impressed and likes this neighborhood!

AND! This morning I saw my first tree swallow of the year. In fact, it is the first tree swallow I've seen in a couple years. It was swooping over a neighbor's yard - and I know she has nest boxes, too. Tree swallows readily use bluebird nest boxes, and have been known to evict bluebirds (babies, eggs, the works), but if given the opportunity to have a nest box of their own, they will prevent other tree swallows from nesting nearby, allowing bluebirds to move into other boxes. This is another reason I have so many nest boxes in my yard.
Posted by Ellen Rathbone at 10:35 AM

Email ThisBlogThis!Share to TwitterShare to FacebookShare to Pinterest
Labels: bluebirds