A Beautiful Day - Part II: Things with Wings (and a frog)

Lots of insects were out yesterday, which is not surprising with the warm sunshine. I fed plenty of blackflies - a coworker commented when I came back inside that it looked like I'd been bitten on the neck by a vampire!

Some of the insects were willing to pose for photos, others less so. Still, I submit for your curiosity, a gallery of things with wings.

This first insect was flying around and landing on the toothwort blossoms. The narrow waist makes me think it is a wasp, but the sponging mouthpart, and the antennae say "fly." I'm waiting for results from BugGuide. 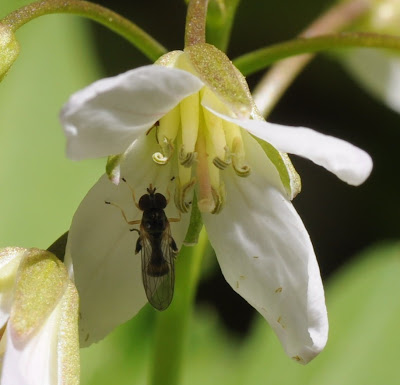 While photographing the ginseng, I watched this mosquito as it flew in for a meal...not on me, but on the flower. It must, therefore, be a male mosquito, which I know feast at flowers instead of humans. 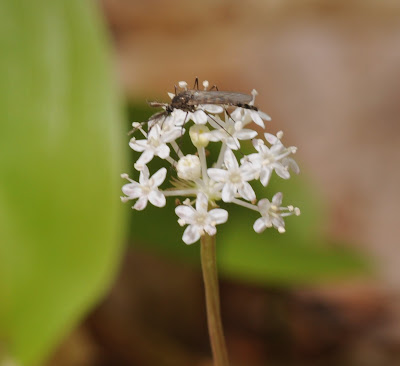 How scary-looking is this beetle (you may have noticed him yesterday lurking on the indian cucumber root)? You can't tell by this photo, but it had a bit of a green iridescence to it's elytra (wing cases). This is a stag beetle (Platycerus virescens). Most stag beetles have these enormous antler-like mouthparts (mandibles), but this fellow's mandibles are fairly small. Even so, I don't think I'd want to be on the receiving end of a bite. 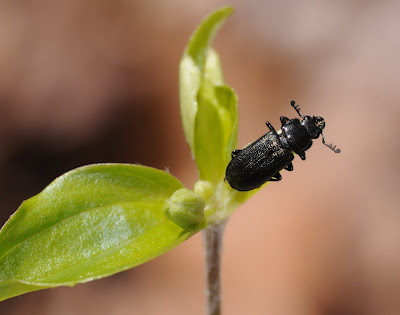 I was a bit surprised to see this damselfly flitting about - it seems too early for them. But, they would know better than I when it's best to emerge. They are flighty things, and difficult to track down for photos. I believe this is an aurora damsel (Chromagrion conditum), the key for ID being the yellow patch on the side of the thorax (looks greenish to me). These damsels emerge in spring and early summer and are considered rather sedentary (yeah, right). They are perchers, staking out their territories from vegetation near streams, swamp, and spring pools. We were near the beaver pond when we met. 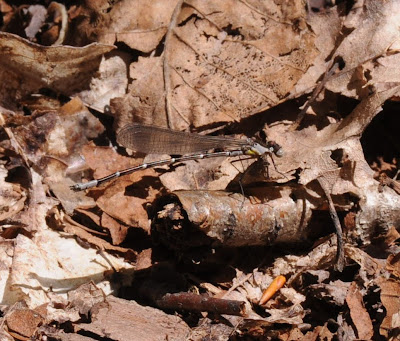 A bit later on, I spied this common baskettail (Epitheca cynosura). What caught my eye about this lovely dragonfly was how furry its thorax was. An adaptation for emerging early in the year when the mornings can still be quite chilly? 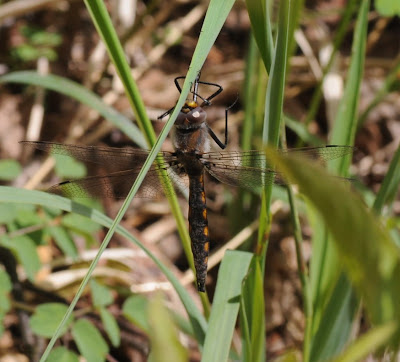 Not far from where I found that dragonfly, my attention was grabbed by this: 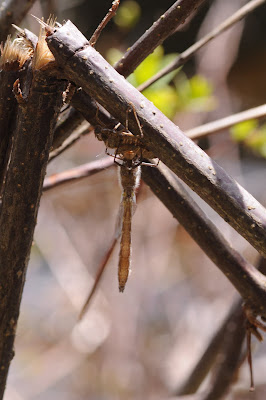 A dragonfly emerging from its nymphal exoskeleton (exuvia)! Actually, the dragonfly had already emerged and was just standing on it's shed skin, resting. This gave me a great chance to get some close-ups. 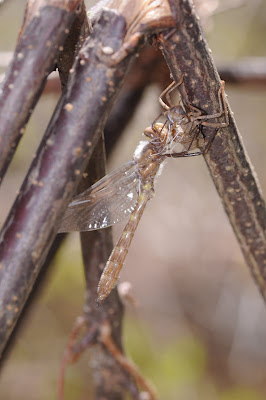 I really wanted to capture the eyes, but had a devil of a time doing so. 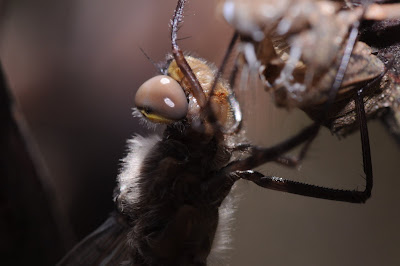 Again, note how furry it is, even on the abdomen! I believe this is another common baskettail. These dragonflies are erratic and rapid fliers, so it's a good thing I saw them shortly after emergence, when they weren't quite to energetic (I saw some more up by the frog pond, and there was no way I could capture them with the camera - zip, zip, zip!).

Why are they called "baskettails"? Because the female rolls her eggs into a ball, or basket, which she holds under the tip of her abdomen before she releases them into the water. 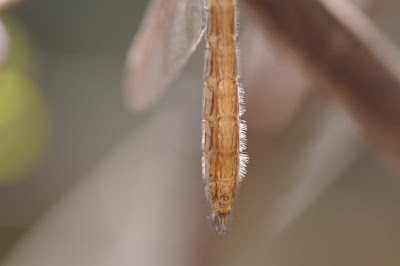 I was up at the beaver pond when I heard a ruckus of hawk calls from the general vicinity of this tree. I saw a hawk fly to the tree and vanish. Could there be a nest here? Then another hawk soared over the tree and off to the east. I'm pretty sure it was a red-tail. Of course, I had the wrong lens on the camera, so I couldn't get any shots. So, I fumbled with the camera bag, got out the correct lens and assembled the camera. In short order a second hawk flew from the tree. 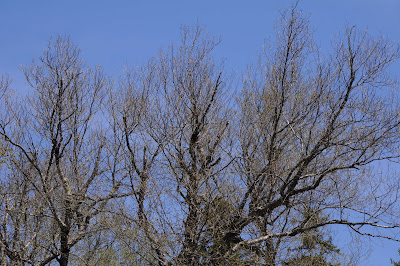 The camera decided to focus on the sky! After a couple failed attempts, I managed to get a couple shots as the bird flew overhead. A broadwing (Buteo platypterus)! Could the fuss have been because it felt threatened by the red-tail? 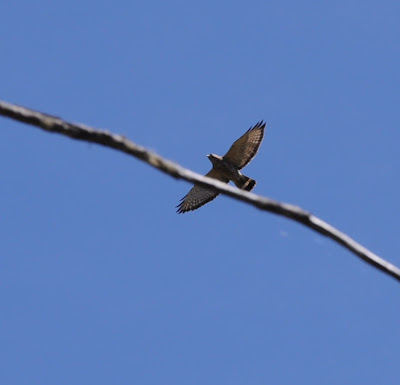 I wanted to check out the mining/digger bee nests I remembered being along the roadside a couple years ago. I found the nests, but no bees were in sight. It was nearing mid-afternoon by now, so perhaps they were all on siesta. I'll have to check these again on a sunny morning. 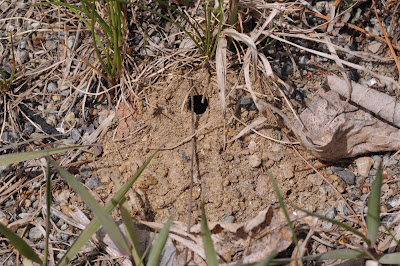 Heading back up the road, I saw two tiger swallowtails (Papilio glaucus) puddling on the roadside. One had flitted past me while I was watching the hawks, so I knew they were "back," but I was surprised to see these two. 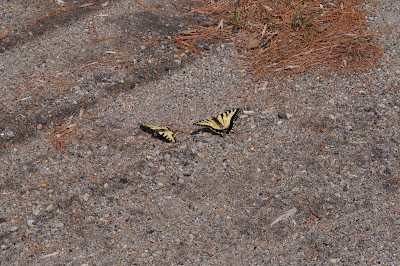 They were so focused on their mineral meal that they completely ignored me, allowing me to get quite close. The wind had begun to pick up by now and kept catching their wings and flipping them up. 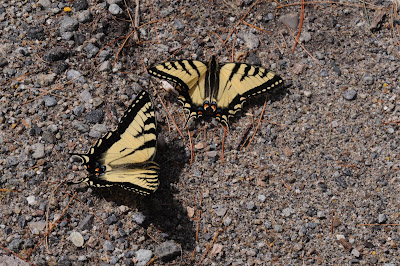 And down at the frog pond, I startled a number of frogs, which all when "peep!" and lept for the water before I even had a chance to see them. One brave soul, however, held its ground. Can you see her? 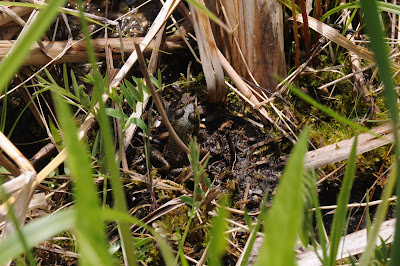 This is a small green frog (Rana clamitans), and because the tympanum (the circular thing behind the eye - what serves as an ear) is smaller than the eye, we know it's a female. On male frogs, the tympanum is larger than the eye. 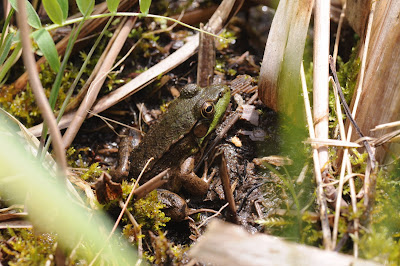 What wonderful finds! Every day on the trails is bound to end up with at least one new discovery. It's a beautiful thing.