The next stop on our whirlwind tour was a short walk along the path to Lake Lonely. This trail, or at least the small section that we did, runs between a golf course and the road. Between the phragmites on the road side and the wooded area on the golf course side, it is well-hidden. We had one target species along this trail, but it wasn't the only thing in bloom.

Ragged Robin, or cuckooflower (Lychnis flos-cuculi) was a new find for the day. It's another non-native plant, but it is a pretty one. I've only ever seen it blooming along a couple stretches of highway - it must like marginal habitats. 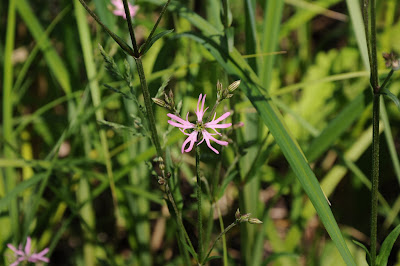 Here is the plant we came to see: yellow water buttercup (Ranunculus flabellaris). All (or most) of its leaves are underwater. Jackie said that it isn't listed as rare or uncommon, but this is the only place she's ever seen it, and she's spent a lot of time over the years slogging through all sorts of habitats in search of plants to add to her life list. 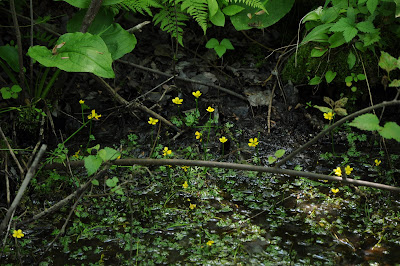 Common fleabane (Erigeron philadelphicus), or Philadelphia fleabane, is a native plant (I was surprised - I thought for sure the fleabanes were European). It used to be believed that if you were pregnant and these were growing outside your house, you would have a girl if the petals had a pinkish tinge (like these), or a boy if the petals were blueish. I've seen a lot of fleabanes in my life, and I've never seen a blue-tinged one. 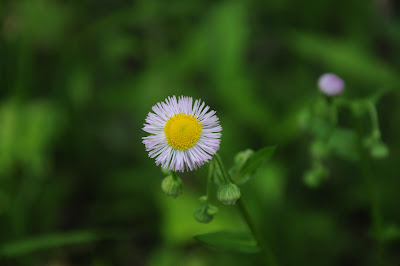 From here we stopped back at Jackie's house to refuel, and then it was off to Skidmore Woods. It was getting late in the day and I still had some shopping to do before driving back home to the kids (dog and cat). Skidmore Woods is a fabulous site, as I've mentioned before. Its calcareous soils make it an island of special vegetation. We had three target species and got four!
First was this wonderfully named Orange-fruited horse gentian (Triosteum aurantiacum). Isn't that a great name? There's nothing horsey about it - apparently it just refers to the fact that it is a big plant. It's not a gentian, so I don't know why it's called one. But the fruits, when they appear, are actually orange (or so Jackie assures me).
Here it is at a distance - not very exciting: 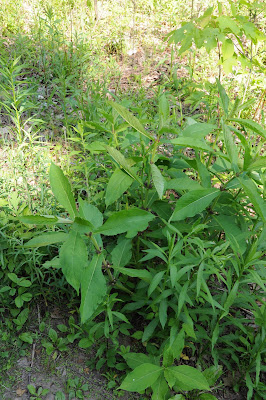 But a closer look turned up these "things" along the stem. At first I thought they were bagworm cases, but then I realized they were actually part of the plant. 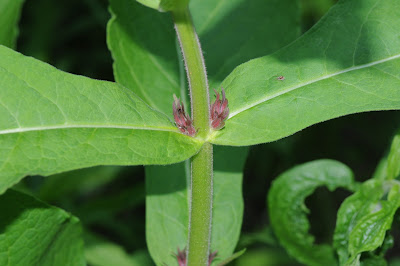 We found some that were still in bloom - kind of odd-looking flowers. None of the plants were fruiting, so until such at time as I see them again, I'll have to take Jackie's word for it that the fruits are orange. 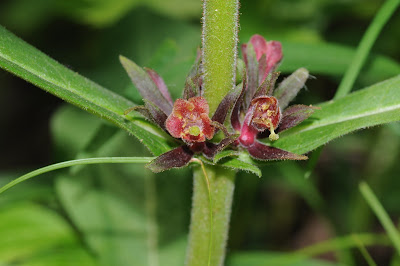 This was our bonus plant: sanicle, or black snakeroot (Sanicula marilandica). It is listed on-line at various sites as a great medicinal plant, but I found no information on whether or not it was safe to consume. 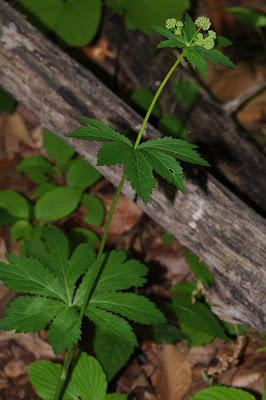 Along a small wooded pool we found tufted loosestrife (Lysimachia thrysiflora). The flowers were not quite open, but apparently inside each one is a small tuft, hence the name. Watch Jackie's blog for photos soon (Saratoga Woods and Waters). 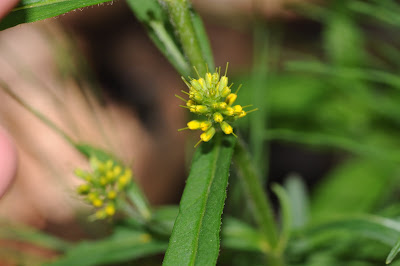 Green violet (Hybanthus concolor) is indeed green, and it is a violet, sort of. 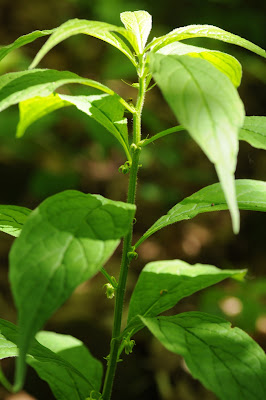 This unusual plant is in the violet family (Violaceae), but not the genus Viola. Similarities with "real" violets seem to focus on the seed pods, which look like other violet seed pods (but larger) and the pods split into three longitudinal sections, just like other violets, to release the seeds. In Connecticut it is believed to now be extinct. What a terrific find, and one I'm glad we took the time to see. 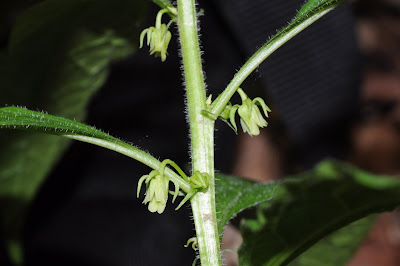 And this wrapped up our day in the field. Total tally: many new plants added to my life list (I'll have to go back and count them), one tick (that I actually found), and a whole day spent with a good friend. What more could a person want?
Posted by Ellen Rathbone at 4:17 PM