A Day in the Field - Queensbury

Is there a better way to spend a day off than going into the field with a good friend? Today I met up with Jackie to walk the bike trail (formerly a train track) near Glen Lake in Queensbury. She was going to show me some "life" flowers to add to my list.

The biggie, of course, was this splendid orchid: the yellow ladies slipper (Cypripedium claceolus): 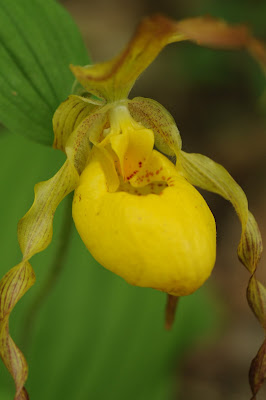 It just makes you sigh to see it, doesn't it? There were several of these, blooming right alongside the road. It is hard to believe that a) they are there, and b) they are still there! What a treat - and how lucky we are that she discovered them the other day when driving by.

We parked by the bike path and I was immediately drawn to this large flowering shrub. I thought at first it was a mock orange, but Jackie informed me that it is a variety of spirea. Up close, the flowers are wonderfully delicate: 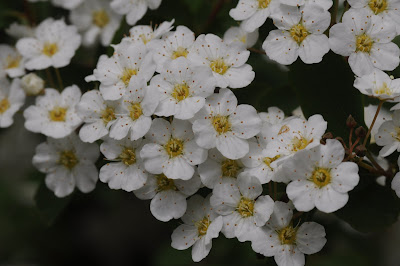 Another life flower for me was this strange-looking thing: gaywings, or fringed polygala (Polygala paucifolia). It reminds me of some odd little creature, rather than a flower. They are quite tiny, and most were past their prime, but whole swathes of slope along the path were covered with them. 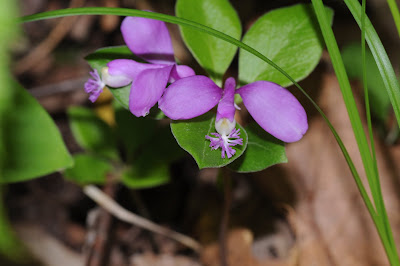 Another perennial favorite is wild columbine (Aquilegia canadensis). So many columbines we see are horticultural varieties, but I think the wild ones are the prettiest. 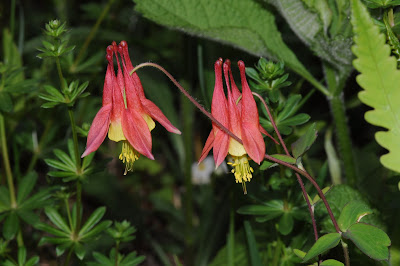 Especially if you lift them up and peek at their bloomers! 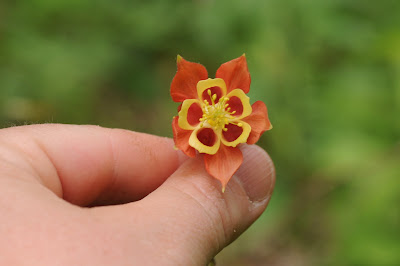 Another target species for me was the glaucous honeysuckle (Lonicera dioica). Most of the flowers were past their prime, but the color is still delicious. 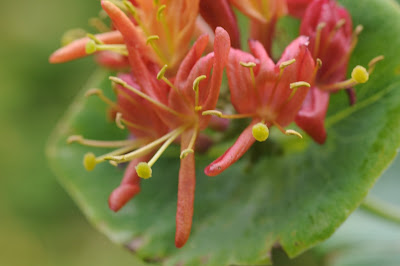 And apparently this hummingbird moth thought the flowers were delicious, too, for it was hovering around and sampling as many blossoms as it could. It didn't want to stay in one place for long, though, so it was difficult to photograph. This image caught the coiled up tongue: 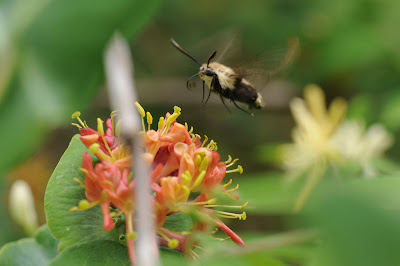 And here it is getting a meal: 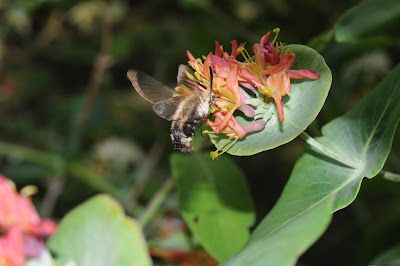 A lovely view of its back and those wonderful clear wings: 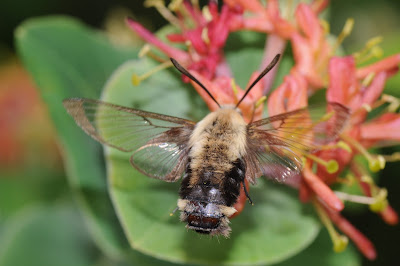 When looked at head-on, the honeysuckle almost looks like a green plate filled with a colorful salad! No wonder the moth was attracted to it. 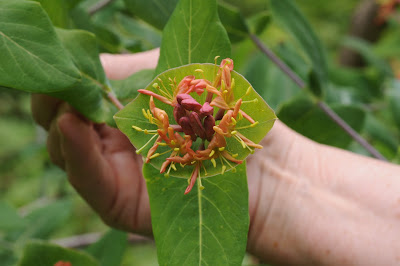 Carrion flower (Smilax herbacea)was another interesting find. The stem was this lovely purple-black, bruise-like color, with a bit of a whitish bloom to it. The flower itself, which wasn't quite open yet, looked like a bunch of little broccoli florets with long whiskers! 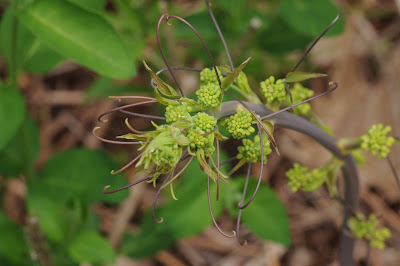 I had to have Jackie stand in front of this large shrub. Can you guess what it is? This is burning bush (Euonymus atropurpureus) - aka: wahoo. Yes, the same as the nurseries sell you because it has beautiful flame red leaves in the fall. But it is an invasive - and when it gets loose, this is what it does. I have two left at home that I need to rip out...along with the last Japanese barberry (another awful invasive). 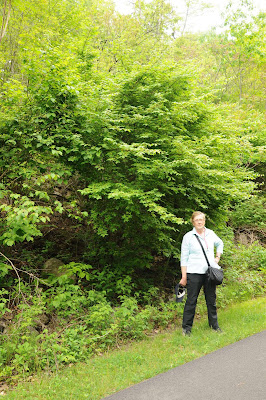 This is a very small flower: hoooked crowfoot (Ranunculus recurvatus). Another new one for me. As you can see, the flowers are winding up their blooming season. 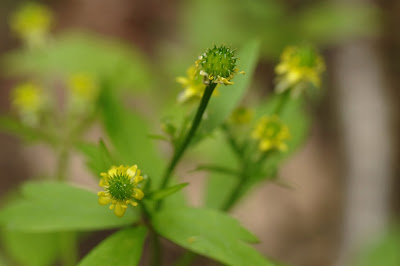 And why is it called "hooked" crowfoot? Take a look at the center of the flower - it looks just like a burdock burr. 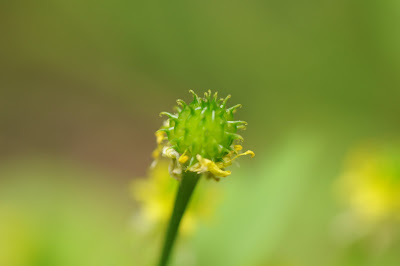 Miterwort (Mitela diphylla) was in bloom. It looks a lot like foamflower, but scrawy by comparison (the flower head of foamflower is much more compact). But, if you look at each little flower up close, it looks like a tiny little snowflake: 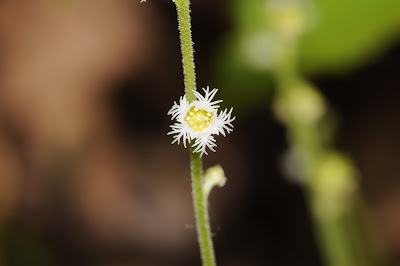 Near the profusion of gaywings, we had a gorgeous mountain azalea (Rhododendron roseum) in bloom. I had to use a flash to capture the beauty of its flowers. 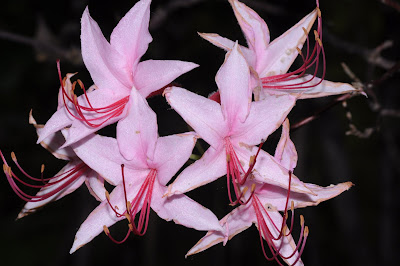 And here we have another target plant: nodding trillium (Trillium recurvatum). Nodding trillium is a plant that NYS botanists are trying to map throughout the state because it is very difficult to find, mostly because it is disappearing. Jackie has located two or three colonies of this now rare plant - a great find for her, for me, for the state botanists. 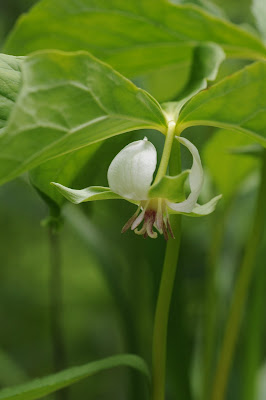 Now, I am quick to judge when it comes to plants. I saw this and said to Jackie - oh, sessile-leaved bellworts. I was surprised to see them because even in Newcomb they are reaching the end of their season. But, Jackie informed me that these were not sessile-leaved bellworts. They are, in fact, bellworts of the perfoliate type (Uvula perfoliata); note how the leaf completely surrounds the stem (or looks like the stem perforates the leaf). Another new plant for my life list. 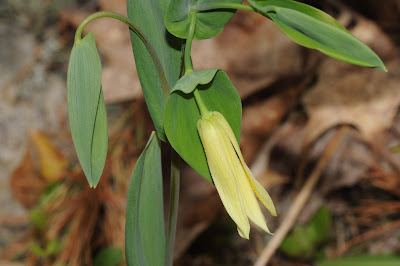 Red baneberry (Actaea rubra)- the only one we saw. When those flowers ripen into fruit, they will be red. Popular with wildlife, this is not a plant we should eat (note the name: BANEberry). 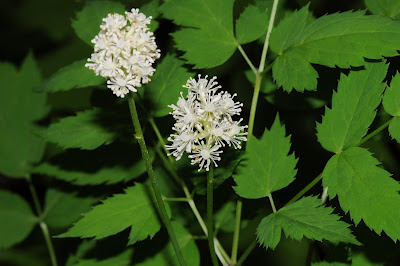 Here we have another VERY TINY plant. I meant WEENIE! How Jackie saw them, I'll never know. This is thyme-leaved sandwort (Arenaria serpyllifolia). Another new species for me. I wonder how many of these little plants I have encountered in my life without ever knowning it.
It is a non-native species, but not one that seems to be taking over our country, like garlic mustard. Sandworts, as their name suggests, like dry, sandy soils, which is why we were finding them in the shoulder along the path. 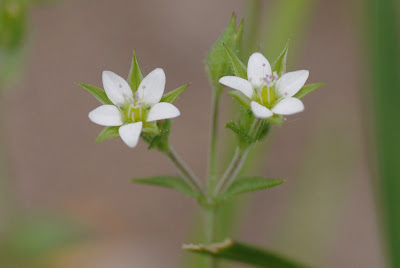 Flowers weren't all we saw! We encountered two large toads. Of course we had to have a photo session. The toad, we believe it was a female, was released unharmed. 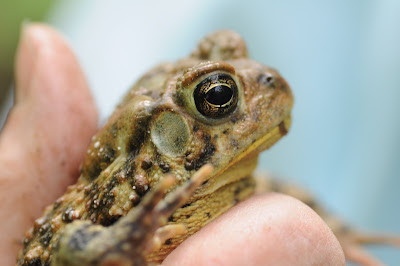 Further along the bike path we stopped at a wonderful little wetland. A bird was singing and singing away, with a song neither of us recognized. And then we saw it: a gorgeous male oriole. There were actually several in the area, each calling and marking his territory. 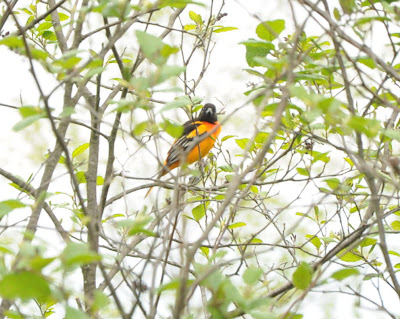 We tracked this one down in a staghorn sumac and took many shots while he preened his feathers. 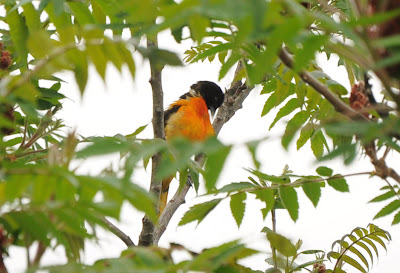 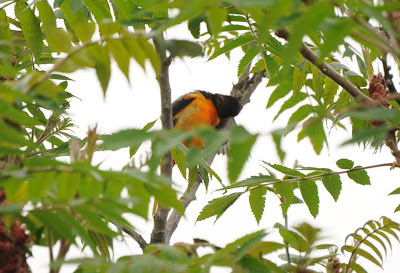 Many other birds were calling and flying around. This yellow warbler (sweet sweet sweet I'm so sweet) was singing away on the far side of the sumac. 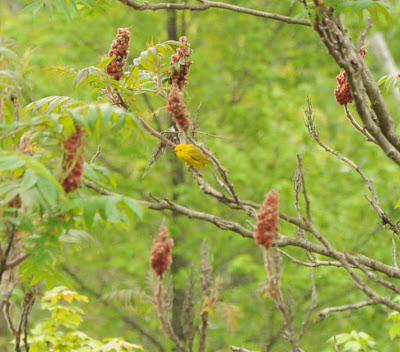 Sadly, I had to leave - groceries to buy and a dog to get home to! But we made plans to meet the next day and visit the Ice Meadows north of Warrensburg. Stay posted for photos of that trip next.
Posted by Ellen Rathbone at 2:34 PM