It was a blustery day in the Adirondacks yesterday (actually, it was blustery pretty much all around NY). Severe thunderstorms crossed the state, and tornado watches were initiated. As we sat here in the dark, listening to the weather radio and watching the temperature drop from 81 to 64 degrees (Fahrenheit), and tracking the storm on the computer, we were pretty sure that the darkening sky and the whipping wind spelled doom for us. And yes, the storm was headed for Newcomb...but the other end of town. The VIC got maybe a drop or two of rain and that was it.
The boss was greatly disappointed.
Still, the weather redeemed itself later on when a second stream of storms passed over during the night, yielding great thunder and lightning displays, and strong gusting winds. No hail or tornados, and only 0.2" of rain, but it was a more impressive display.
Today, however, it is a different world. The heat and humidity of the last several days has passed and it is a glorious true Adirondack day. The air is cool thanks to the strong wind that is blowing, which is serving double duty by helping keep the insects at bay.
On a quick trip around the Rich Lake Trail, we had some neat finds: 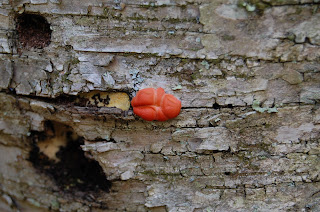 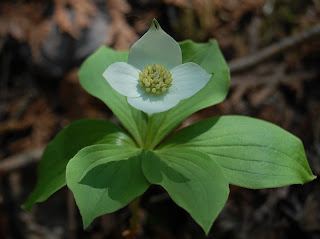 bunchberry (Cornus canadensis) - note the flowers are actually in the center, and the white "petals" are actually bracts, like the red "petals" on poinsettias; 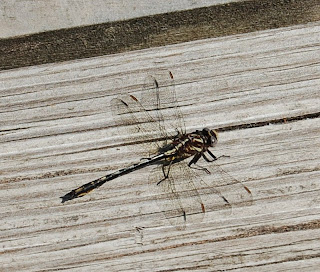 dragonflies (how many wings do you see?); 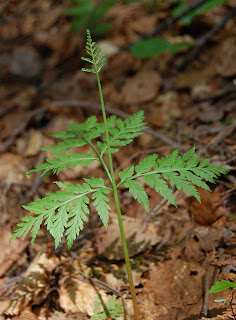 The dragonflies have me flummoxed (what a great word). Eight wings?!? I have two photos, taken about 15 minutes apart (one when I headed out on the trail and the other when I came back), so they are likely of two different individuals, and each one shows eight wings! Could it be a trick of the light? It's not shadows, because the colored spot on the leading edge of the wings is in color on all eight wings. Could it be from the wings moving and the camera capturing what is essentially double exposure (but I don't recall the wings being in motion when I took the photos)? Or maybe we have mutant dragonflies! The jury is out on this one. I have a call in to a dragonfly person - will keep you posted.
Posted by Ellen Rathbone at 3:04 PM