Yesterday evening while on our walk down to the Hudson River, I found the right hind wing of a luna moth in the weeds along the roadside. No other evidence of the insect was about. A bat's late night meal?


I brought it home so I could include it here with a photo because what struck me about this wing is how furry it is: 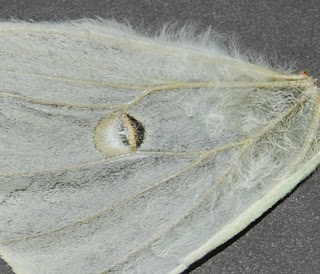 What is the purpose of this furriness? Does it, like the furry hairs on early plants like coltsfoot, help it keep warm? I don't know. I'm still looking for information.

Meanwhile, here is some background info. about the luna moth:

Last night I saw my first fireflies of the season. Actually, it may have been only one firefly. Still, it was the first of the season.

Last Thursday (11th) evening, along the same route to the Hudson, we encountered two snapping turtles digging nests and one wood turtle. I used to see several wood turtles along this stretch of road in early June, all digging nests and laying eggs, but a couple years ago they paved the sandy turn-around and this has severely limited potential nest sites.

The wild strawberries (Fragaria virginiana) are starting to fruit now - I saw the first ripe ones along the roadside this morning.