Every day is an adventure when you strap on your snowshoes and head out on the trails - you just never know what you may find.

It was so tropical yesterday (high of 49.5*F) that the first snowfleas (Hypogastrura nivicola) put in an appearance. It was great, because the third graders I had with me got to see them for the first time ever, watching as the fleas "jumped" all over the place. Sadly, the photo I took did not come out, so you will have to imagine where a pepper shaker exploded all over the snow, and all the little bits of pepper are jumping about into the air.
Snowfleas are actually a primitive insect called springtails (not fleas at all), and they measure no more than 1/8 inch. The snowflea has no wings, and it doesn't actually jump. Instead, it tucks a pair of modified legs under its abdomen, and little hook-like structures hold the "legs" securely in place (the spring is now wound up). When the hooks relax, the spring is released: the "legs" push against the ground and zing! up goes the critter into the air. Not all springtails have this launching apparatus - only those that live in the leaf litter do (snowfleas).
Snowfleas eat the mold and fungi found in leaf litter where things are decaying. They are attracted to wet surroundings, and we usually only see them in the winter, when on mild days they they prepare to migrate. At this time upwards of a million of these critters rise and make "haste" for new digs, probably because the food ran out where they had been living.
This morning Toby and I had a great find (no photo of this, either). As we cruised through the parking lot of the medical center, we came across a circular splatter of feathers, and one small gobbet of meat: some bird had bit the dust. I suspect the bird was a blue jay, although none of the feathers were blue any more (could be because they were soaking wet; blue in feathers is due to structure and light, not pigment, so water can change the color). I tried to acertain if the bird had been done in by another bird or a mammal, based on how the feathers were removed (plucked or sheared), but the feathers had been driven over by enough vehicles that nothing was certain. Still, a nifty find on a dreary wet morning.

And finally, today I had a group of 6th graders in who were phenomenal! And they were here long enough that I could not only go into great tracking detail indoors, but we could also do our one-mile trail! I didn't have high hopes for good finds today, thanks to the rain and melting snow of the last 36 hours. I was pleasantly surprised. We saw otter trails, fresh beaver chews, and even followed a large canid (probably coyote) down the trail, marvelling at its footprints, 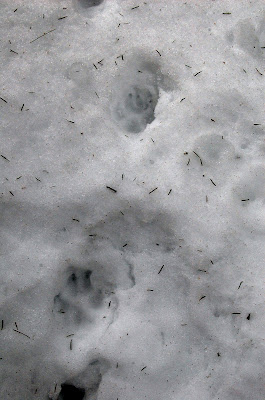 and oogling the lovely pile of scat it left behind (we so seldomly encounter scats here). I'm not sure, but those white "beads" might be parasite eggs. 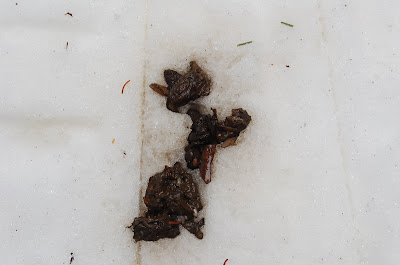 We even came across a pile of beechnut husks that something had recently emptied for a mid-winter feast. 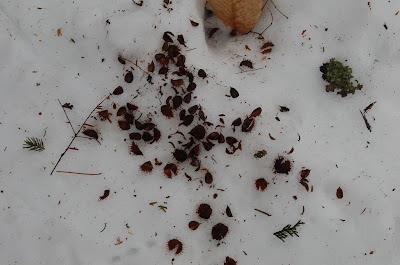 And now, for your "listening" pleasure, and by way of celebrating today's find, I give you one of my all-time favorite songs - the Scat Rap, which I think was written by Doug Elliott (although I could be wrong). This is dedicated to all the folks out there, who, like me, get excited about finding animal scat.
Scat Rap

Chorus:
It starts with an “s” and it ends with a “t”,
It comes out of you and comes out of me.
I know what you’re thinking, you can call it that,
But let’s be scientific and call it scat.

You’re walking through the woods and your nose goes “ooooo”;
Must be some critter’s scat’s near you.
It may seem gross, but it’s okay,
They ain’t got no place to flush it away.

Down the trail something’s lying on the ground;
Nature’s tootsie roll all long and brown.
Don’t wrinkle your nose, don’t lose you lunch,
Break it apart, you might learn a bunch.
Don’t use your fingers, use a stick;
Keep sanitary now that’s the trick.

If you wanna find out what animals eat,
Take a good look at what they excrete.
Stuck in the scat are all kinds of clues,:
Parts of the food their bodies can’t use
Like bones and fur (2x)
Hard berries and seeds (2x)
Crawfish shells, ouch! (2x)
Grass fibers and weeds (2x)

'Possum up in a ‘simmon tree
Eating all the ‘simmons he could see,
Backed his butt into the weeds,
His scat was nothing but ‘simmon seeds.

Down by the creek on a hollow log,
Scat full of berries and bones of a frog.
Late last night he was out with the moon;
Wading the creek it was Mr. Raccoon

You’re driving your car by a woods or a field,
Scat goes splat on your windshield.
It’s full of seeds, all purple and white;
You just got bombed by a bird in flight

Peas porridge hot, peas porridge cold,
Scat on the trail two minutes old.
Two minutes old, is this a joke?
No, it’s still warm, look at it smoke!
Cat scat, rat scat, bat scat, too;
All god’s chillun do scat a lot, too.

Peas porridge hot, peas porridge cold,
Scat in the woodlot nine days old.
Nine days old, how can you tell?
Getting kinda dry and not much smell.
Dog doo, frog doo, hog doo, too;
All god’s chillum do a doodley do.

Sneaking through the woods, be quiet now, shish!
Take a quiet step—something goes squish.
Don’t put it in your mouth, it ain’t delish.
Let’s put some in a Petri dish.
Look through a microscope, what do you see?
Microscopic organisms 1, 2, 3.
Bacillus, streptococcus, and E. coli,
They eat scat and then they die.
Don’t you worry, no need to cry,
They ain’t that different from you and I

If you want to know who was out and around,
Take a long hard look at the scat on the ground.
It tells us what they eat, tells us who they are;
That’s what we know about scat so far.
Posted by Ellen Rathbone at 2:16 PM