After the Storm and Iggles

All through the dimly lit day yesterday, heavy flakes of snow plummeted to the ground. The temperature remained just above freezing, and the water content of the flakes was high. They seemed to melt upon contact with the ground, leaving little in the way of accumulation.

By 5:00 PM the precipitation had turned to rain. When I got home, I grabbed the shovel and pushed the sloppity slop and gloppity glop from the driveway and the road directly in front of it. It was an exercise in shovelling water.

Knowing that the rain was likely to continue, I bit the bullet: the roof would have to be raked. So I assembled the long handle of the roof rake and attacked the back of the house first. Fortunately, the heavy and sodden condition of the snow actually made it easy to remove from the roof, as slab after slab slid down to the ground. In record time the back was done and I moved to the front. This morning I was quite glad I had done it. 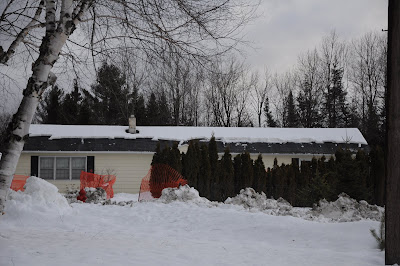 All through the night it rained, rounding the harsh angles of the plowed up snowbanks. By morning, the wind was in full swing, blowing the heavy grey clouds about and letting the sun peek through. 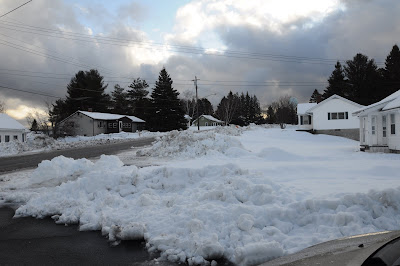 The town crew was out for a good portion of the night, making sure the roads didn't freeze and pushing back the snowbanks, each load no doubt weighing upwards of a ton. This morning found things very wet and only slightly frozen. Icy slush would soon melt again, but for now it was firm enough not to leave us soaked from our morning walk. 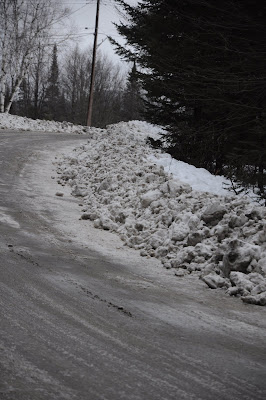 While coming down the highway, Toby suddenly went on alert. He pulled to the end of the leash and all his fur was on end. Surely something dangerous was just ahead! 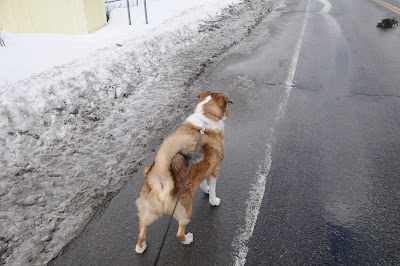 It moved across the road in a hesitant tumble. Is it dangerous? Maybe it would provide a good chase! 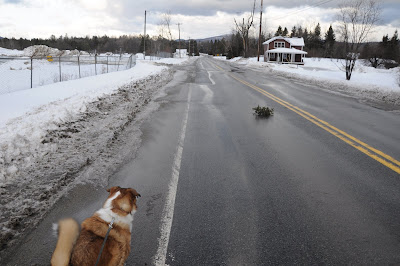 How deflated he became when it turned out to be just a branch from a tree! 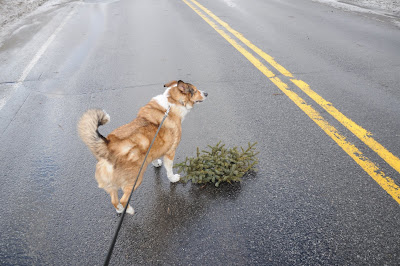 The excitement didn't end there, however. As I headed in to work, I noticed an enormous bird flapping ponderously in circles just north of the road. I pulled over to watch. Was it an eagle? I couldn't quite see any white on the head or tail, and by the time I finally got out the camera to take pictures, it had decided to exit stage left. If you can zoom in, however, you will see the raptor shape to the beak. I think it was an immature bald eagle. 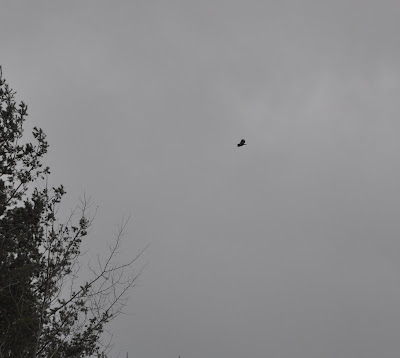 Even higher, though, another bird soared. Its mission seemed much more leisurely; surely it was simply enjoying a ride on the wind. 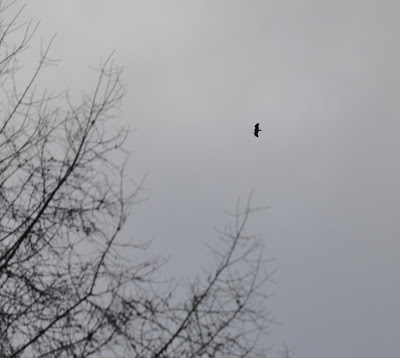 This time, however, the white head and tail were visible, even at a great distance. 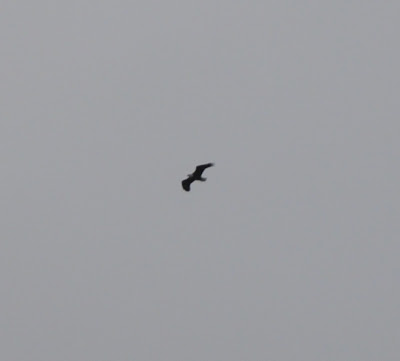 Two log trucks and several passenger vehicles passed me as I stood behind the driver's side door of my car, staring at the sky, camera in hand. I wonder what all those people were thinking as they sped by to various jobs and errands. No doubt wondering what the crazy woman was doing on the side of the road.
Posted by Ellen Rathbone at 10:12 AM