Another One Bites the Dust

This beautiful purple finch feather greeted me in the parking lot this morning. It's a bit rumpled, but otherwise seemed to be in pretty good shape. 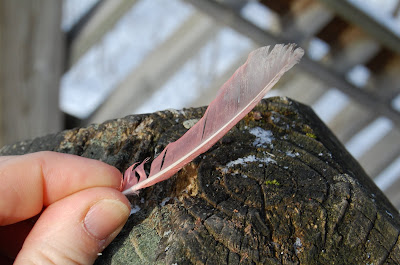 I brought it inside to photograph, but found that the color was just not coming out, so I took it out to the back deck for some natural lighting. This is a shot of the back side of the feather, 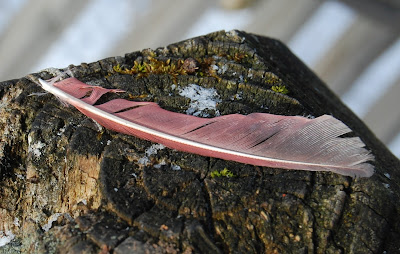 which is almost as colorful as the front side: 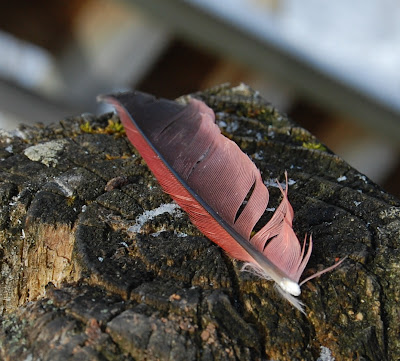 But do you see the tip of the quill there? Here's a closer look at the quill tip - not great, but the best I could get (my camera and macro lens are at home today): 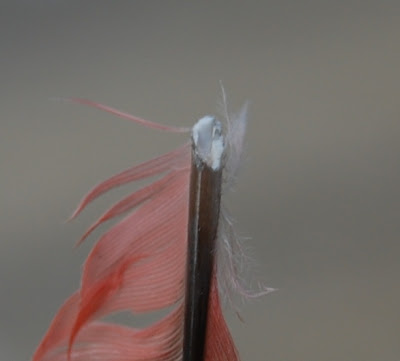 This is a very interesting find. This tells us that this bird didn't just lose a feather as it was flapping overhead. Nope - this bird was likely someone's dinner last night.
So, I've been doing a bit of research into how one determines what predator got this bird. It's not as easy as you might think. Here's what I've found out so far.

If a predatory bird, say a sharpshin hawk, caught this finch and ate it, it would've plucked the feathers out, extracting them from the finch's body with the quill more or less intact. Sometimes, however, raptors will use their toes to grasp the feather (over one toe, under the next, over the third) and pull it out that way. The feather will then have a bend where the toes grabbed it.

My feather has neither an intact quill nor a crimp in the quill shaft, so odds are it was not taken out by another bird. That means it must've been a mammal. To quote Mark Elbroch, "If the tip of the shaft next to the body has been cut, a mammal is responsible."
Okay...so what mammal could it be? We have to take several factors into account here, such as species of bird (and thus size of bird), where the bird hangs out (on the ground, up high in a tree), where the feather was found, how many feathers were found, what pattern the feathers formed (a circle, a clump), if the carcass present, etc. In my case, it is a single purple finch feather, found in a parking lot, and no other evidence around.

Purple finches are perching birds, so they are most likely to be up in the trees. What predator could've taken a bird from a tree? Not likely a canine. A raptor, certainly, but we already eliminated this option. A weasel? I know martens and fishers will climb trees, and I suppose the long- and short-tailed weasels will, too, since they have been spotted on things like deer rib cages that are hung in trees for the birds.
Could this finch have been on the ground for some reason? It's possible. That opens up the predator possibilities; now canines could be an option.
Purple finches are not terribly large birds. Would a coyote try to catch one? Probably not - it would likely be a difficult catch for a coyote, and not enough bang for the buck, so to speak. A fox, however, might easily go for a small bird on the ground. A finch would maybe yield as much substance as a mouse. Weasels, too, would be hunting for anything on the ground. A finch would be a good catch for a long- or short-tailed weasel.

So now we look at how this feather was broken. With canine kills, you are most likely to find feathers cut off in clumps. Canines use their back teeth (carnassial) to do this, teeth that are designed to shear food into pieces they can manage. As you can imagine, if the feathers are worked towards the back of the mouth, sticking out the side, they are going to get coated with a fair bit of saliva where the mouth, tongue and lips are working at the quills. Therefore, you are likely to find the lower part of the feather's vane clumped together with spit. Canines will also pluck feathers, removing them with their quills intact.

Since I didn't find a clump of feathers, and the vane is not saliva-coated, we can probably eliminate canines from the list of suspects.
What about weasels? Here's what Mark Elbroch has to say about weasels defeathering birds: "Weasels also shear off sections of feathers, but the length of the shear will be short, and if continued, it will vary in angle with each bite." He continues, "...the overall appearance of the sheared edged may be ragged."

On page 294 of Elbroch's Bird Tracks and Sign, there's an illustration of feather damage caused by various predators. The topmost illustration (A) is of junco feathers that a long-tailed weasel removed. The quill damage sure looks like what we see on the purple finch feather above.

Final conclusion: I suspect a weasel, probably long-tailed since they are the most common around here, had a nice finchy snack last night.