I love it when people bring in mystery objects for us to identify.  Out come the books, the cameras, the internet links to appropriate pages.  The hunt is on!

This last week a woman brought in a mystery caterpillar.  Apparently she found several of them on her carpets.  Were they eating the rugs?  Would they threaten her dresses and wool coats?

Gary came and asked if I knew what it was.  No idea.  So out came Caterpillars of Eastern North America - my new favorite book.  I've ordered my own copy to add to my ever-growing library of field guides.  Some page flipping and photo scanning, and voila! he identified it as the larva of the Large Yellow Underwing (Noctua Pronuba). 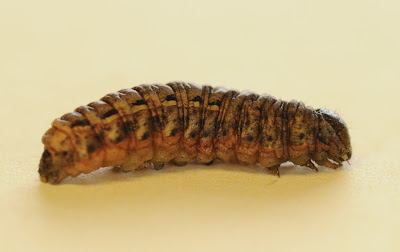 Once identified, Gary turned the caterpillar over to me.  I had brought my camera gear in to work just so I could photograph the beastie.  We have top views (above), and bottom views (below). 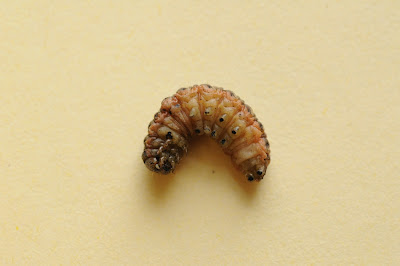 The large yellow underwing is a rather bland brownish moth, with dullish yellow underwings (hence the name).  And, surprise, surprise - it's not native!  It is thought that it entered our part of the world (Canada) sometime in the late 1970s.  It is found primarily in agricultural areas (and waste places, lawns, fields, grasslands), where it feeds on grasses and low-growing forbs.  In other words, it does quite well here in the mid-west, where agriculture is big.

It's a sparsely hairy worm, and was rather sluggish by the time its photo session began.  I guess that's what happens when you leave your specimen overnight in a 56 degree room!

Since the animal refused to be more lively, photo ops were limited.  I got what I could, and the next stage of life began for this caterpillar:  food for our frog. 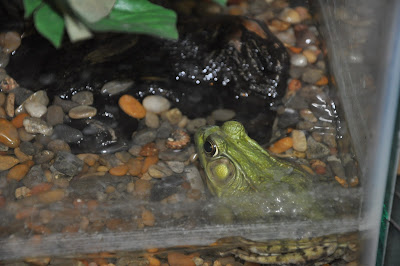 While the frog is always up for a snack, it doesn't exhibit the best of aim.  It's first strike missed, so we moved the caterpillar closer - into the water.  Apparently this was too close - the frog didn't even try.  So, Gary reached back in and place the caterpillar up on the "log". 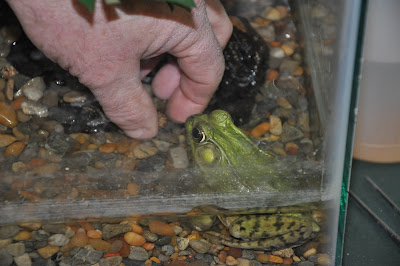 Of course, when the frog struck, it was fast as lightning, and I missed it.  Still, I did get a shot of its eyes partially closed.  Frogs use their eyeballs to push food further down their throats when they swallow.  If you watch a frog eating, you will see its eyes depress into the head as it swallows - pretty nifty. 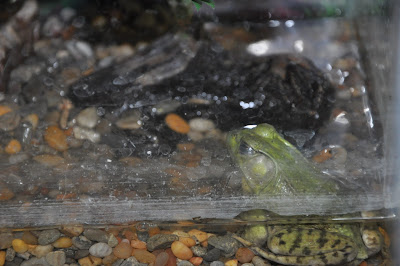 Afterwards, he sang to us his thanks.


Meanwhile, in the tank next door, the garter snake came out to see what the commotion was all about.  Was it feeding time?  Where was his fish, cricket, or worm? 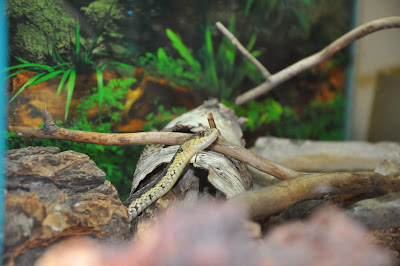 It's great to work in a nature center!

Posted by Ellen Rathbone at 5:21 PM