Camp was just winding up and the camp director pointed out to me "there's a moth flopping on the ground."  And sure enough, there it was - a regal moth. 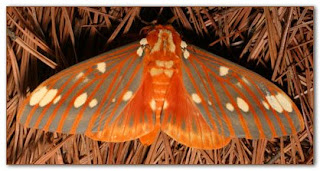 Regal moths are in the silk moth clan - note the very large furry body (this photo is not mine...it is from Dave Smith's blog "ylmb25").  How large is it?  Well the wing span is larger than my hand, and the body was as big as my thumb (I have chubby thumbs).

Well, of course, I had to go and pick it up.  It was fluttering and flapping, but all that effort was not resulting in any flying.  I figured it must be injured, so I placed my hand in front of it and up it crawled.

Poor thing was missing it's left front foot (which I later discovered was recent, because the camp director had taken its photo earlier and it was fully footed).  Well, it scrambled and fluttered and refused to sit still on my hand.  I had no camera with me, so I couldn't get any pics of my own.  It climbed on my shirt, then back on my hand, and while "sitting" there in a complete state of agitation, it left a small white blob on my hand. 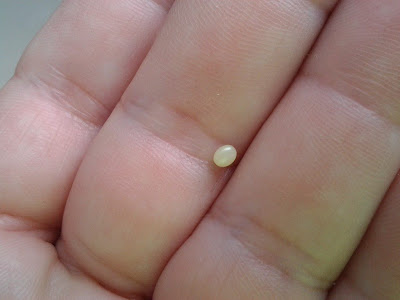 She fluttered some more and then, pfffttt, suddenly she was airborn!  Up she went to the edge of the pavilion roof, and dropped another egg.  Then she fluttered up to a hickory tree and we can only presume she laid a few more eggs on the undersides of a few leaves.  And then she was off again, like a very ungainly bird, flapping across the trail and into the tangle.

I've brought the egg inside - we are going to see if we can raise it.  But how long will it be before it hatches?  And what will it eat?  Research!!!

The regal moth, aka the Royal Walnut Moth (Citheronia regalis), is the largest of the silk moths, going by mass (think weight), in North America.   You many know it better in its larval form:  the hickory horn devil (read my post about these here).   They lay their eggs in groups of one to four on the undersides of preferred host plant leaves, like hickories and walnuts (being neither of these, it must just be she had to "go" while in my hand and I got a deposit).  In 7 to 10 days we can expect the egg to hatch...and then we've got to feed it.