The first full day of our trip to the Adirondacks was based on the weather.  If it was rainy, we were going to hit the Adirondack Museum and the Wild Center, and on Monday we'd do Newcomb and the Ice Meadows at The Glen.  If Monday looked to be inclement, we'd switch these two days.  Looking at the forecast, it looked like today was going to be nice and Monday was slated to rain, so Newcomb was our destination.

The day dawned lovely.  Here's the view from my motel room: 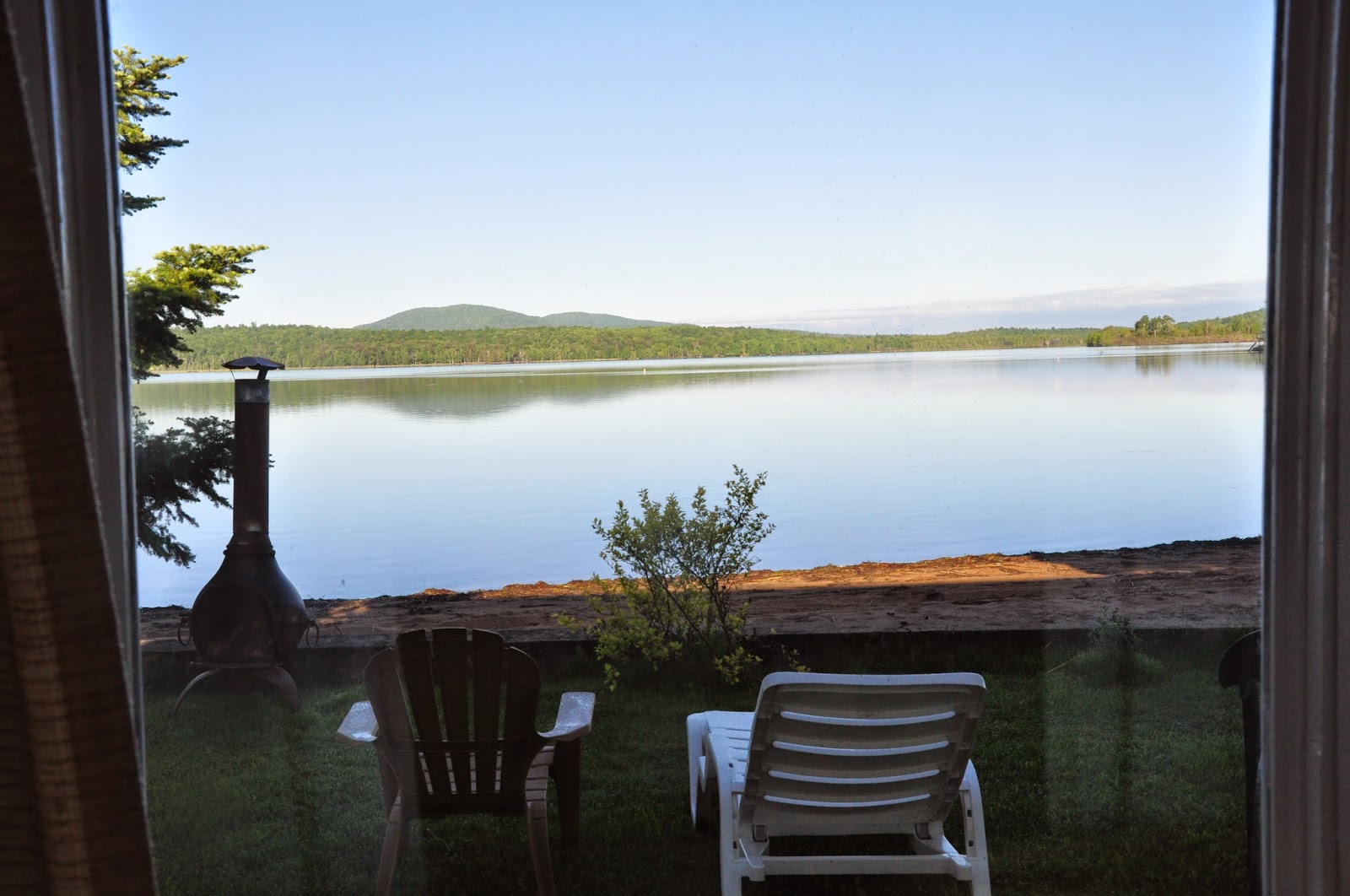 Veteran hikers, Pam and Jim soon left us in their dust, and before long Irene and Jean surged ahead, too.  I've gotten out of shape, so Libby kindly stayed back with me and we took our time on the ascent, taking in the plants and wildlife along the way.

The first flower we encountered would turn out to be one of the most common ones we'd see during this trip:  foamflower. 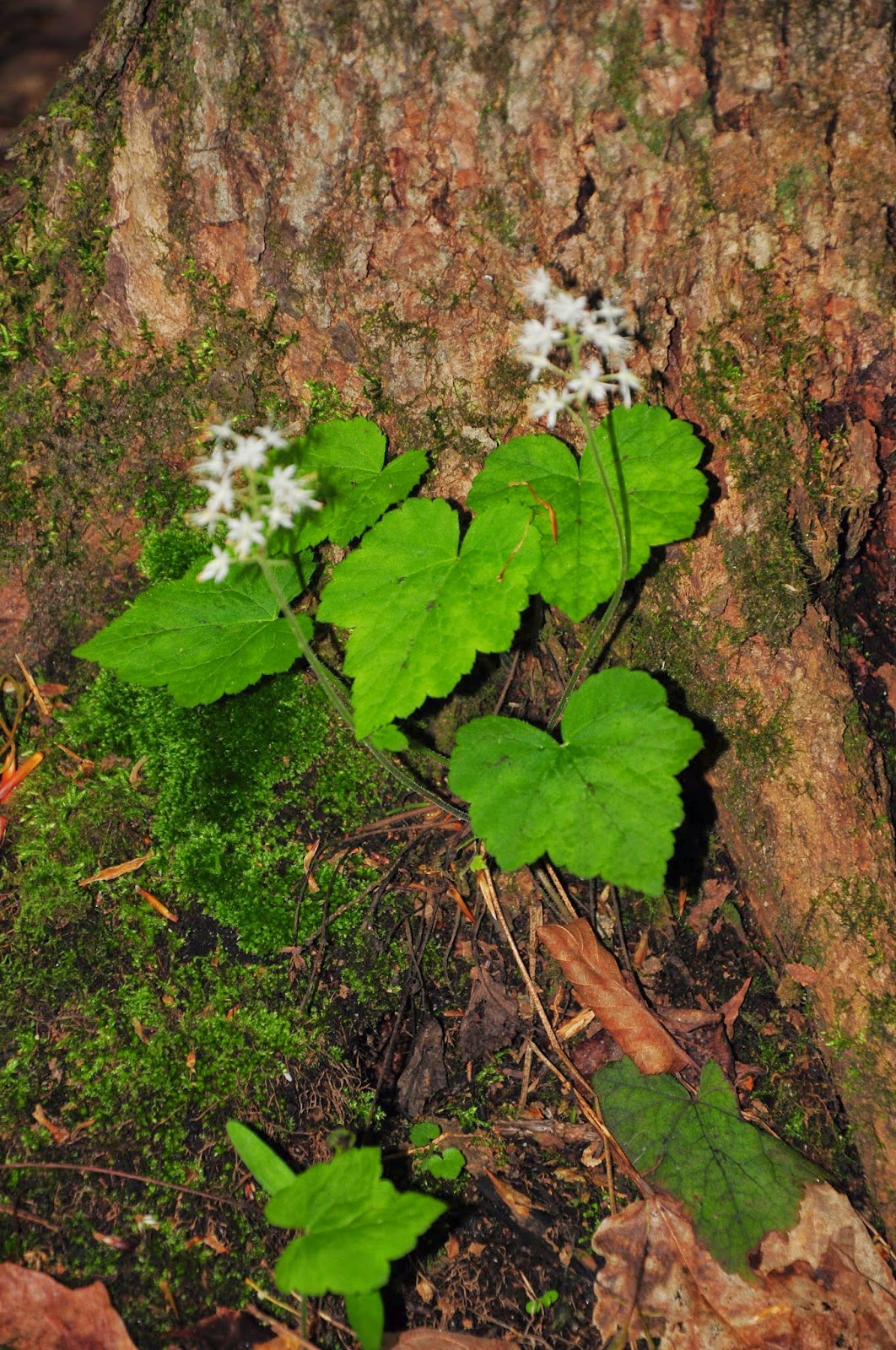 Lots of chipmunks were busy in the woods.  This one took a moment to stare at us while we stared at it. 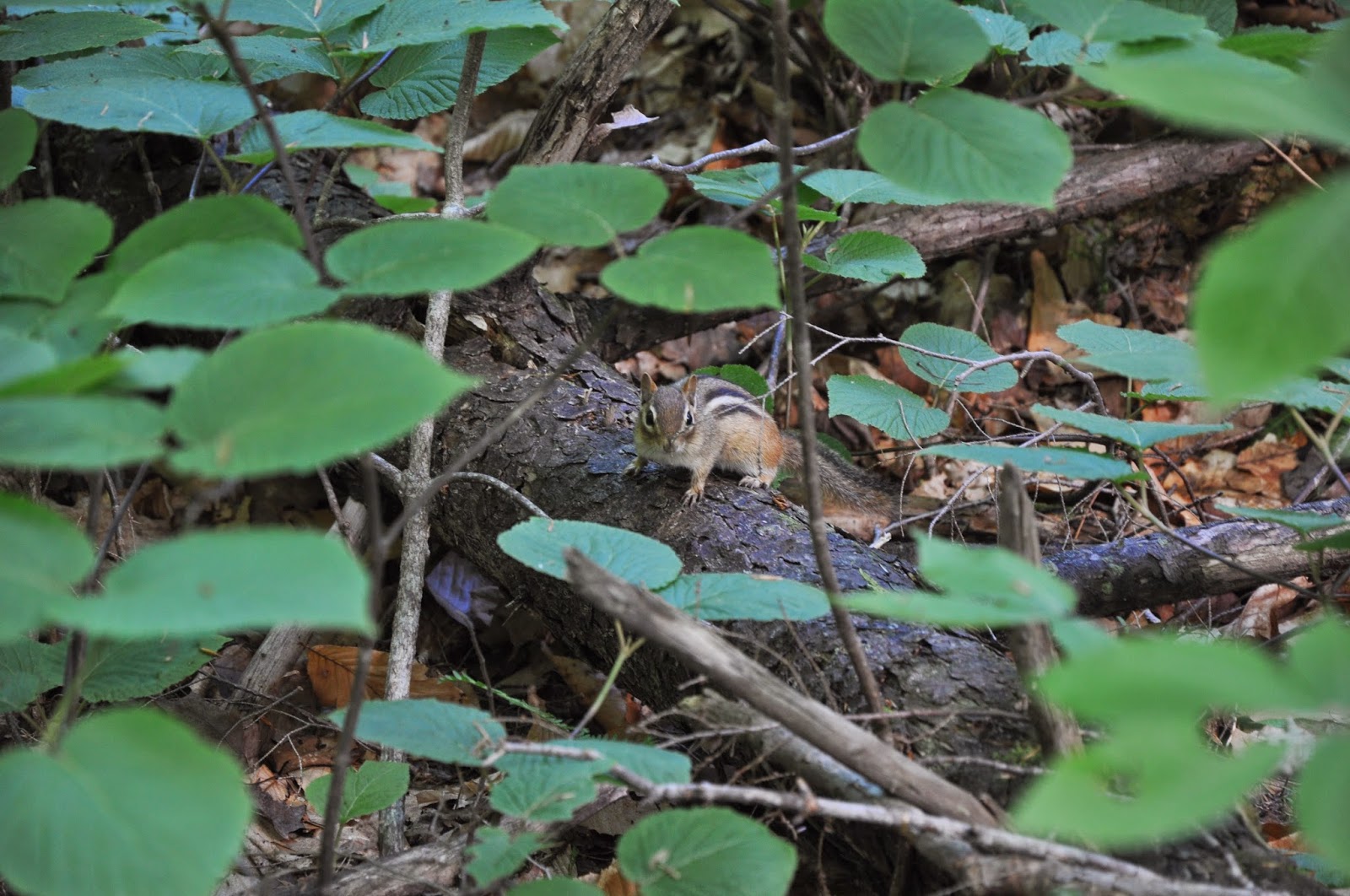 Ginseng!  I've become more familiar with this small woodland flower since moving to Michigan, but here it was blooming on the side of the mountain, too. 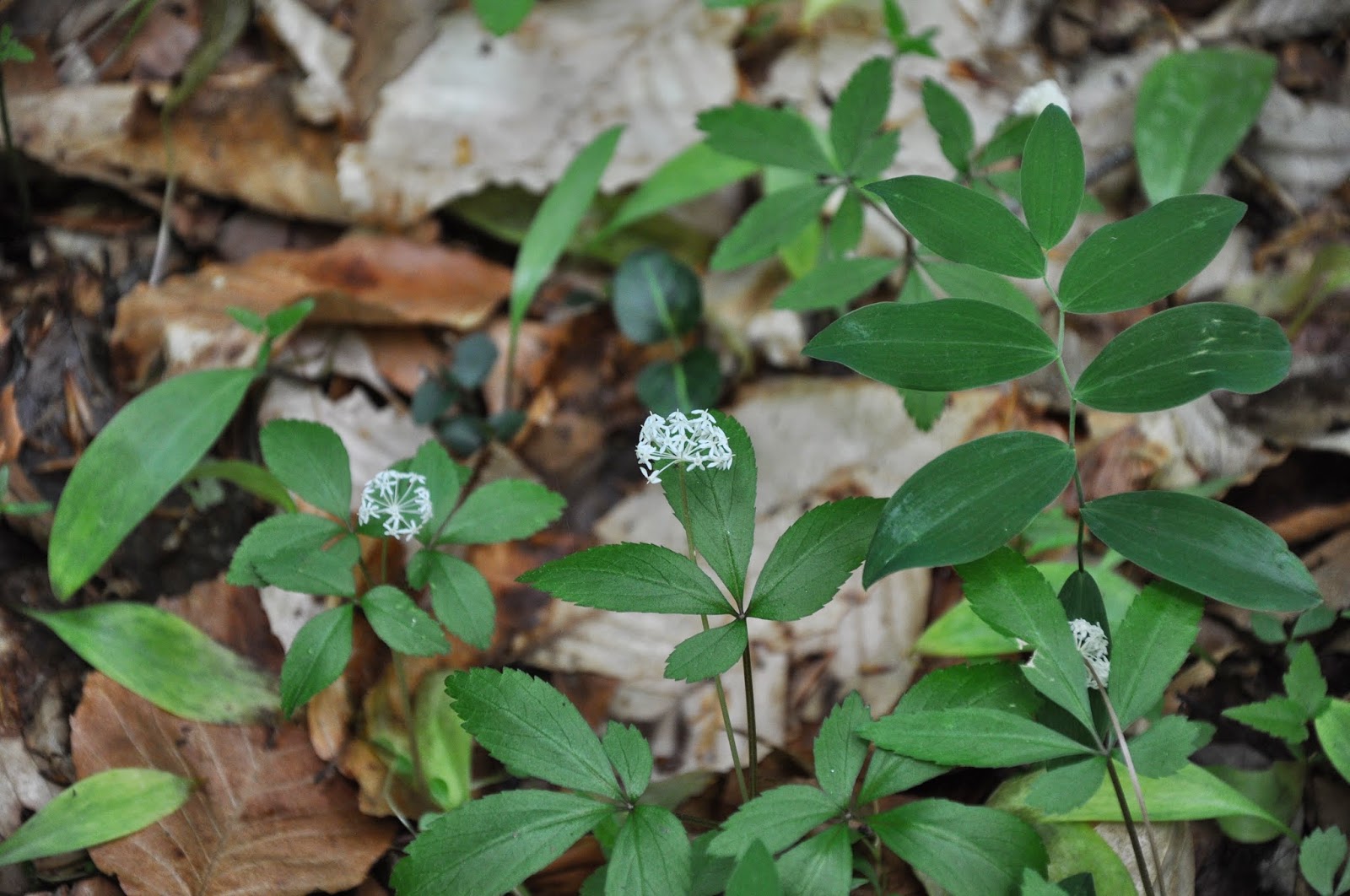 False Solomon's Seal, or Solomon's plume, as my friend Jackie prefers to call it, was nice to see. 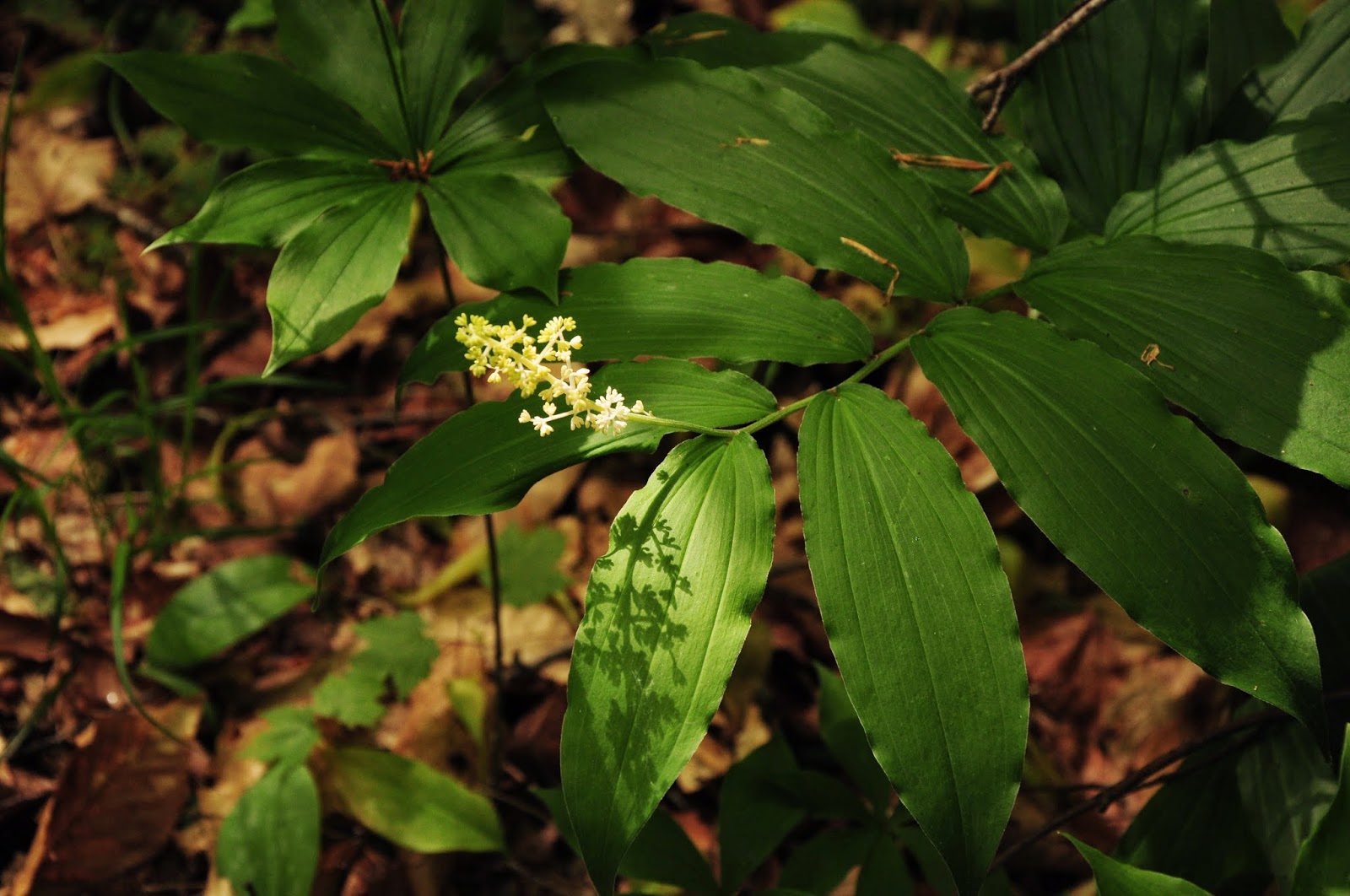 This variegated starflower was sure a surprise to see!  What would cause this variation?  A virus? 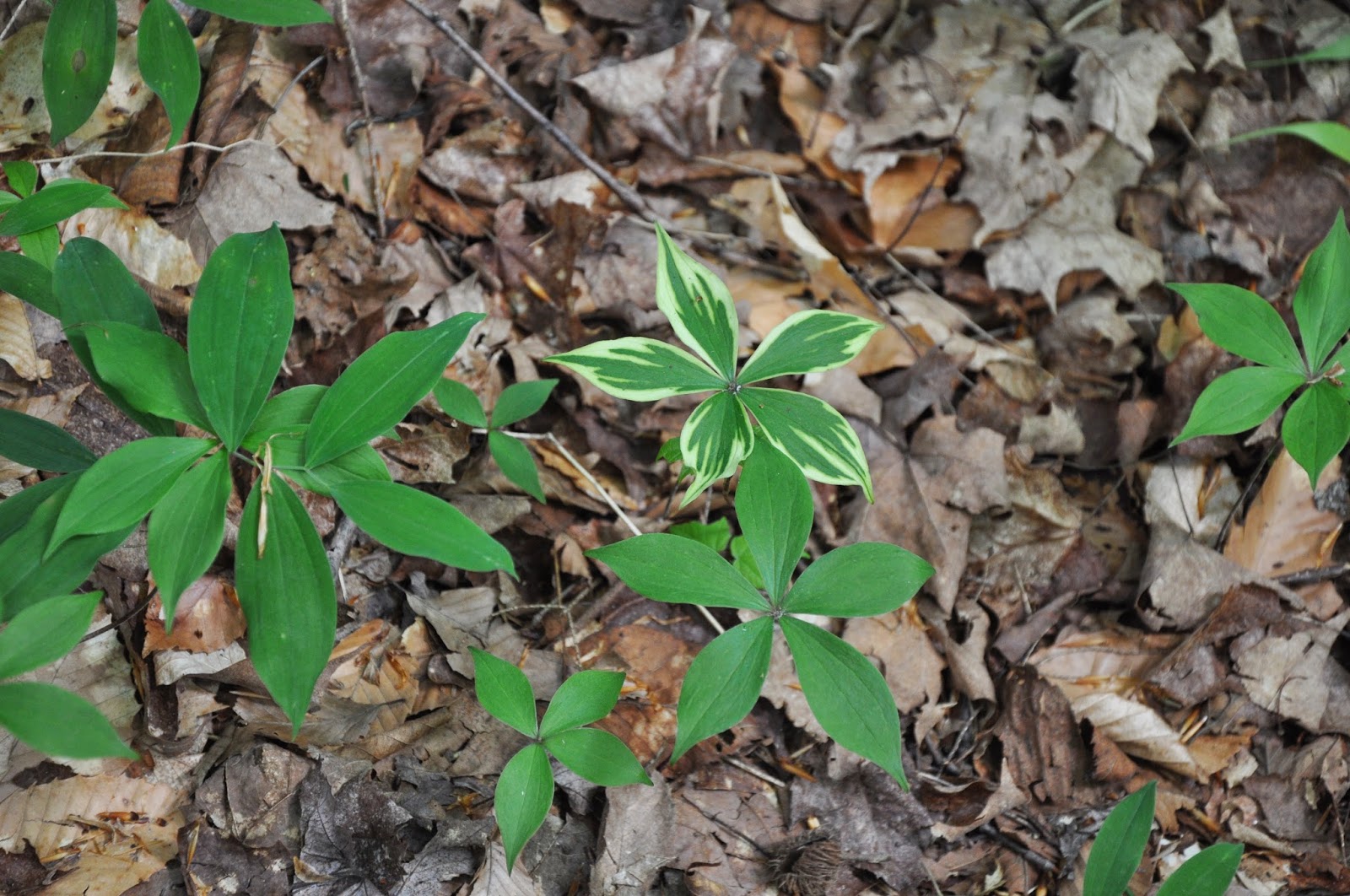 Painted trillium - an old friend.  Haven't seen any of these beauties since I moved.  It turned out to be a new flower to several members of our group. 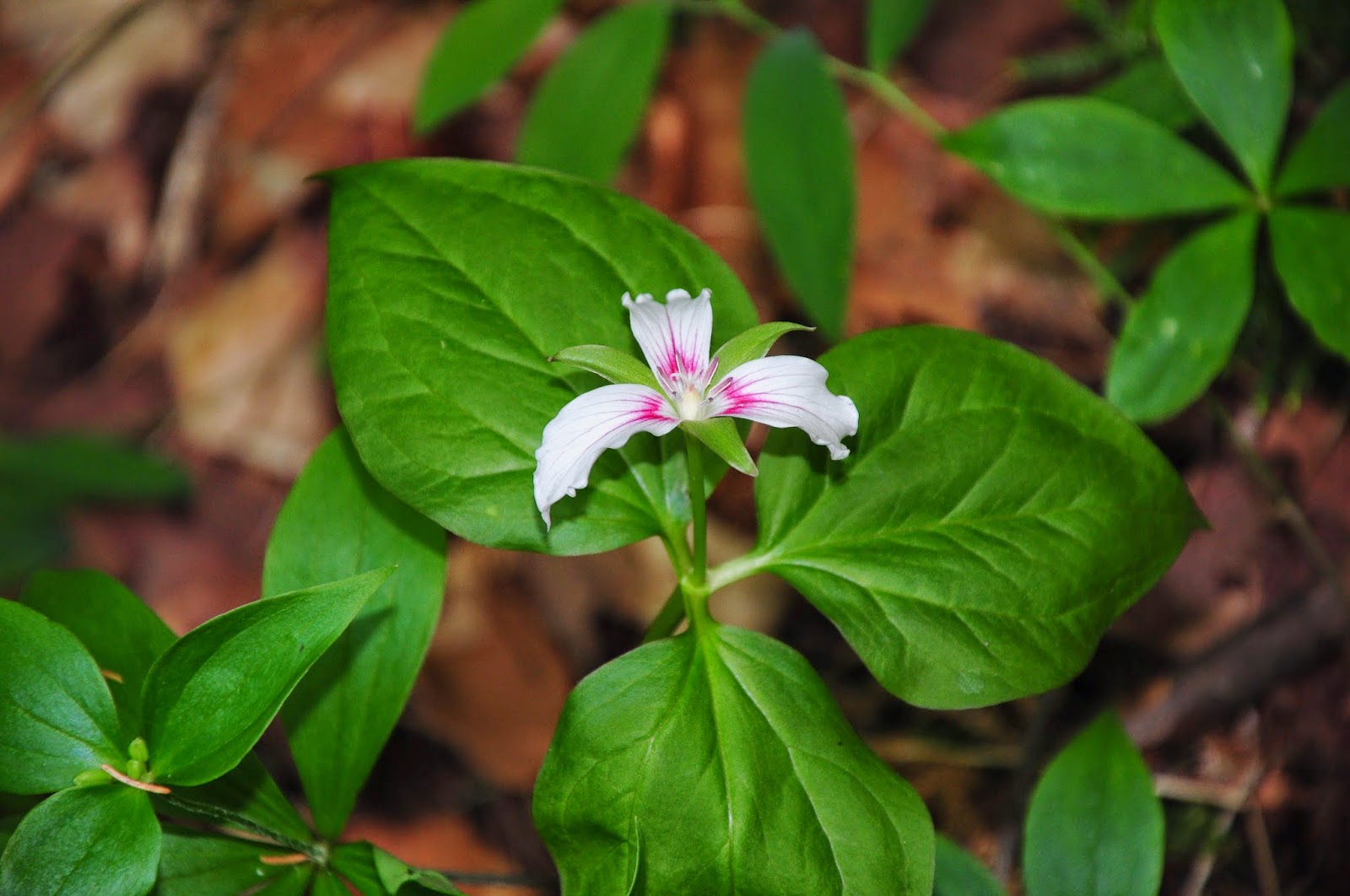 A couple walking two dogs came up behind us and we passed each other two or three times.  Here Hannah, a 13-year-old bulldog, gets a refreshing drink in the stream.  While she was older and out of shape and not built for climbing mountains, she hates to be left behind, so her people brought her along. 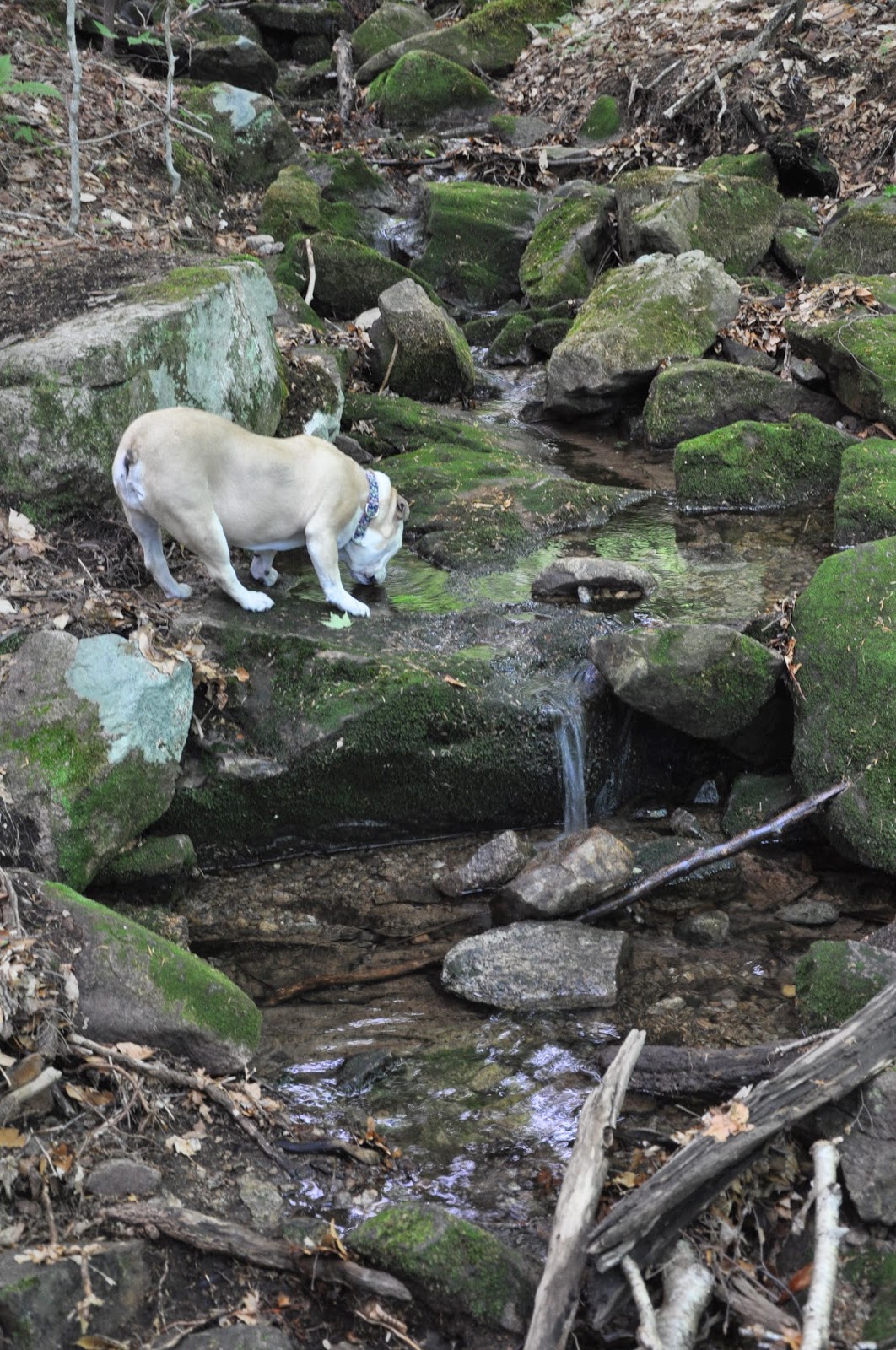 Libby, like so many before her, was fascinated by the embrace of these roots on this rock. Where I am now in Michigan, we don't have these - large boulders were just not deposited in our area (we have mostly glacial till). 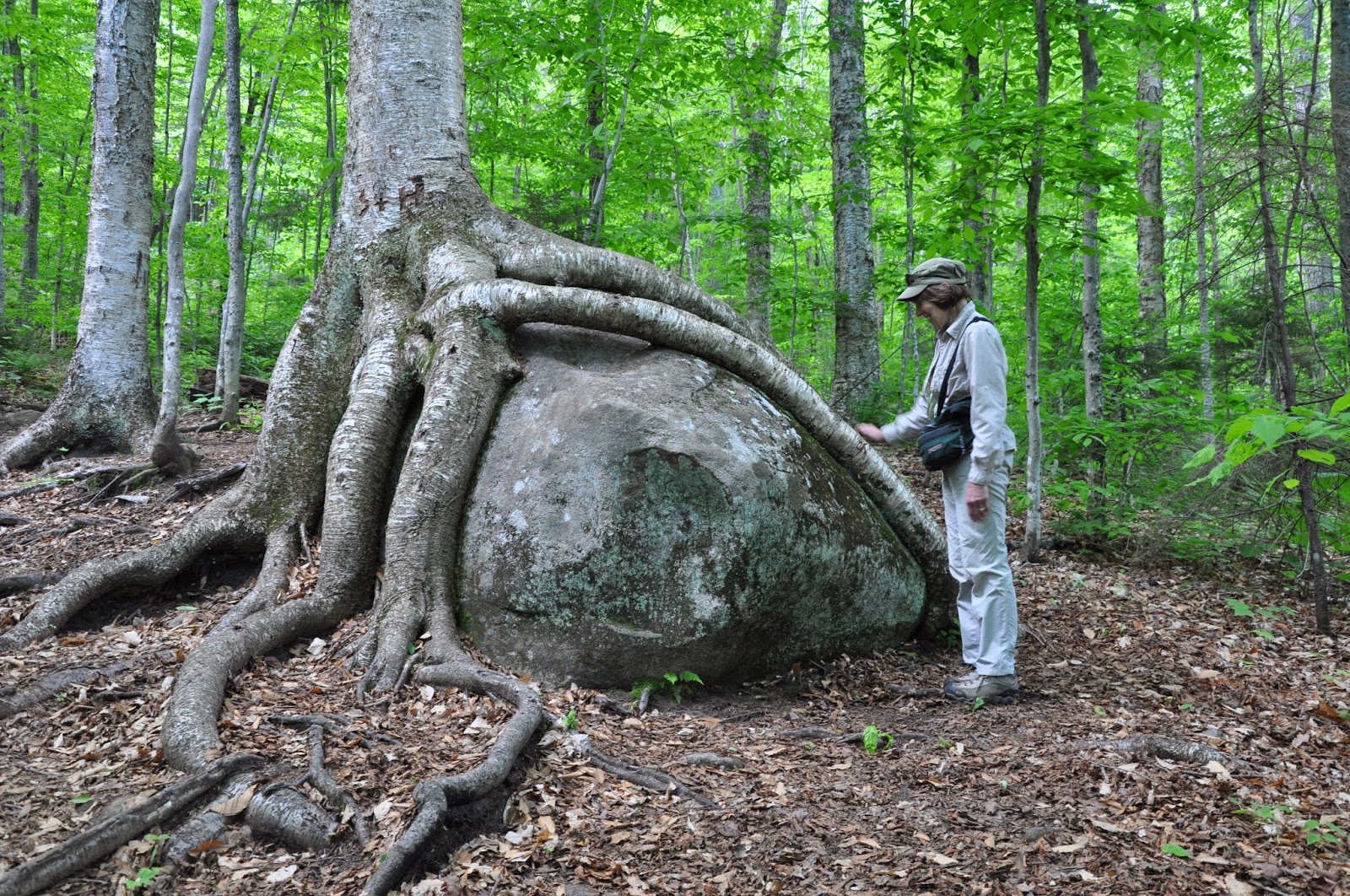 We saw quite a number of toads along the way.  This one we encountered twice, the second time on the way back down!  How do we know it was the same one?  When we left it the first time, it was tucked into the "v" of a pair of roots, and on our way back down, it was still there. 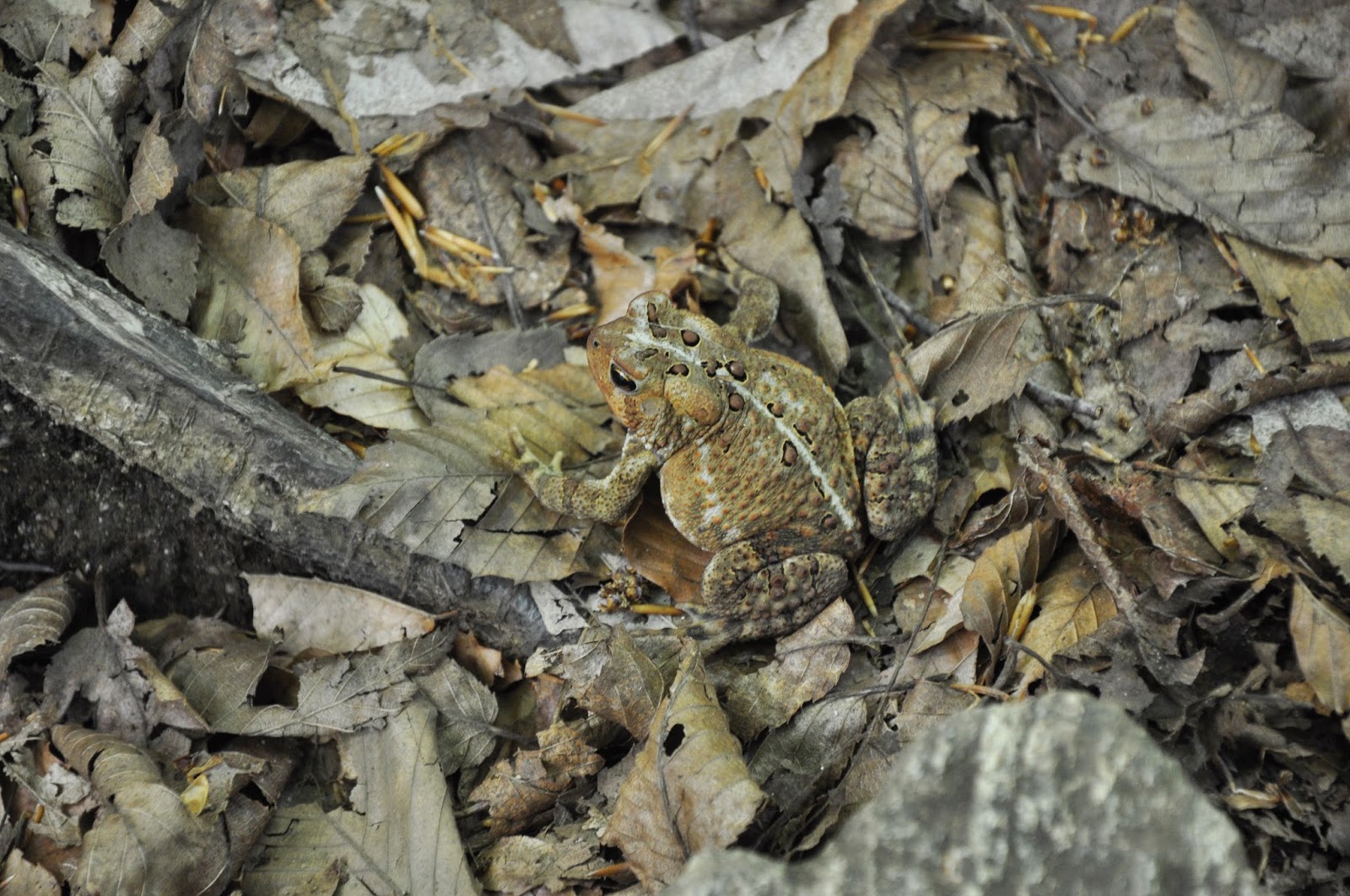 We saw a lot of Indian cucumber roots, but none was quite in bloom yet.  This one, however, was close. 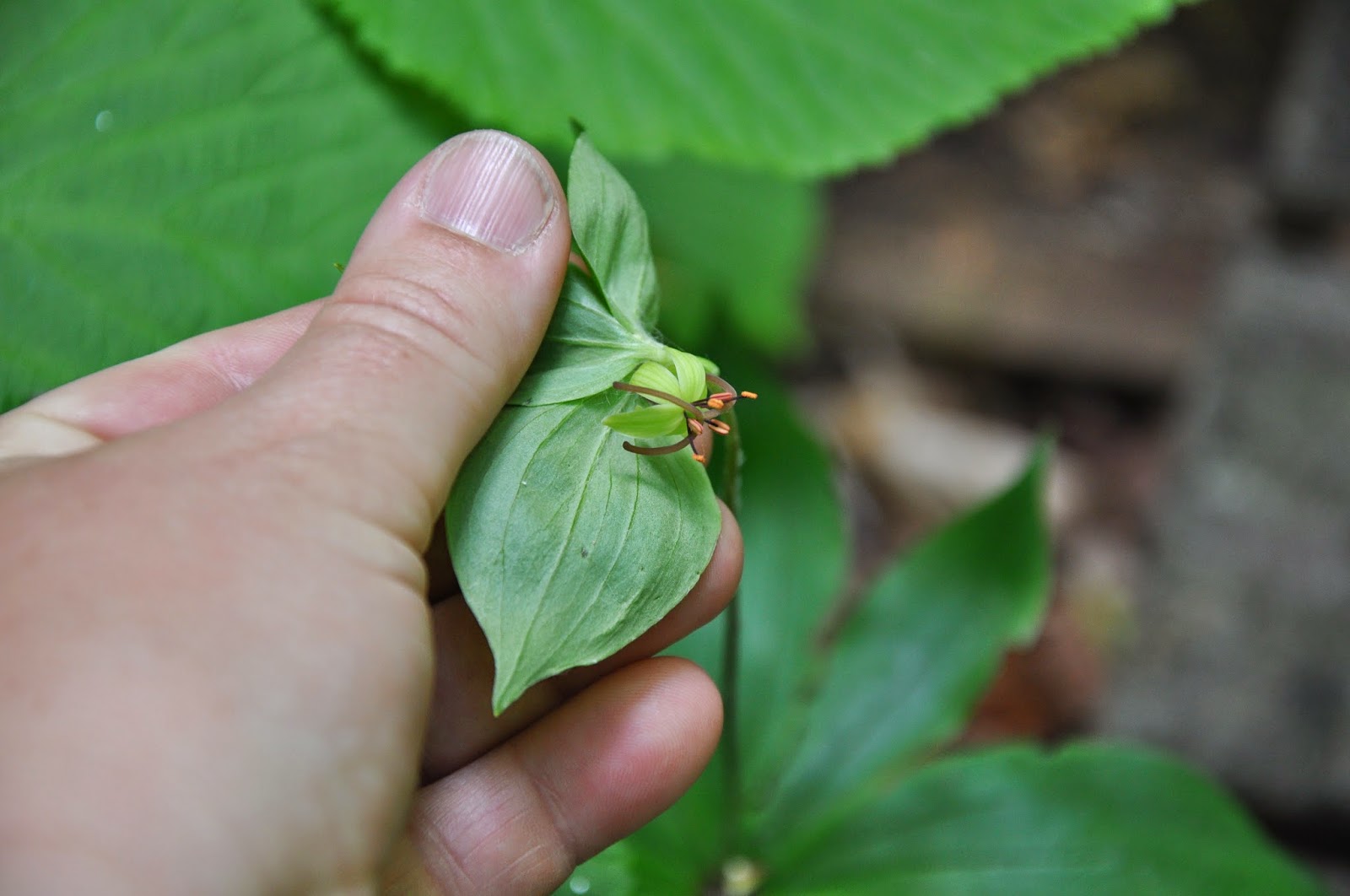 As we climbed higher, we started to see Jack-in-the-pulpits. 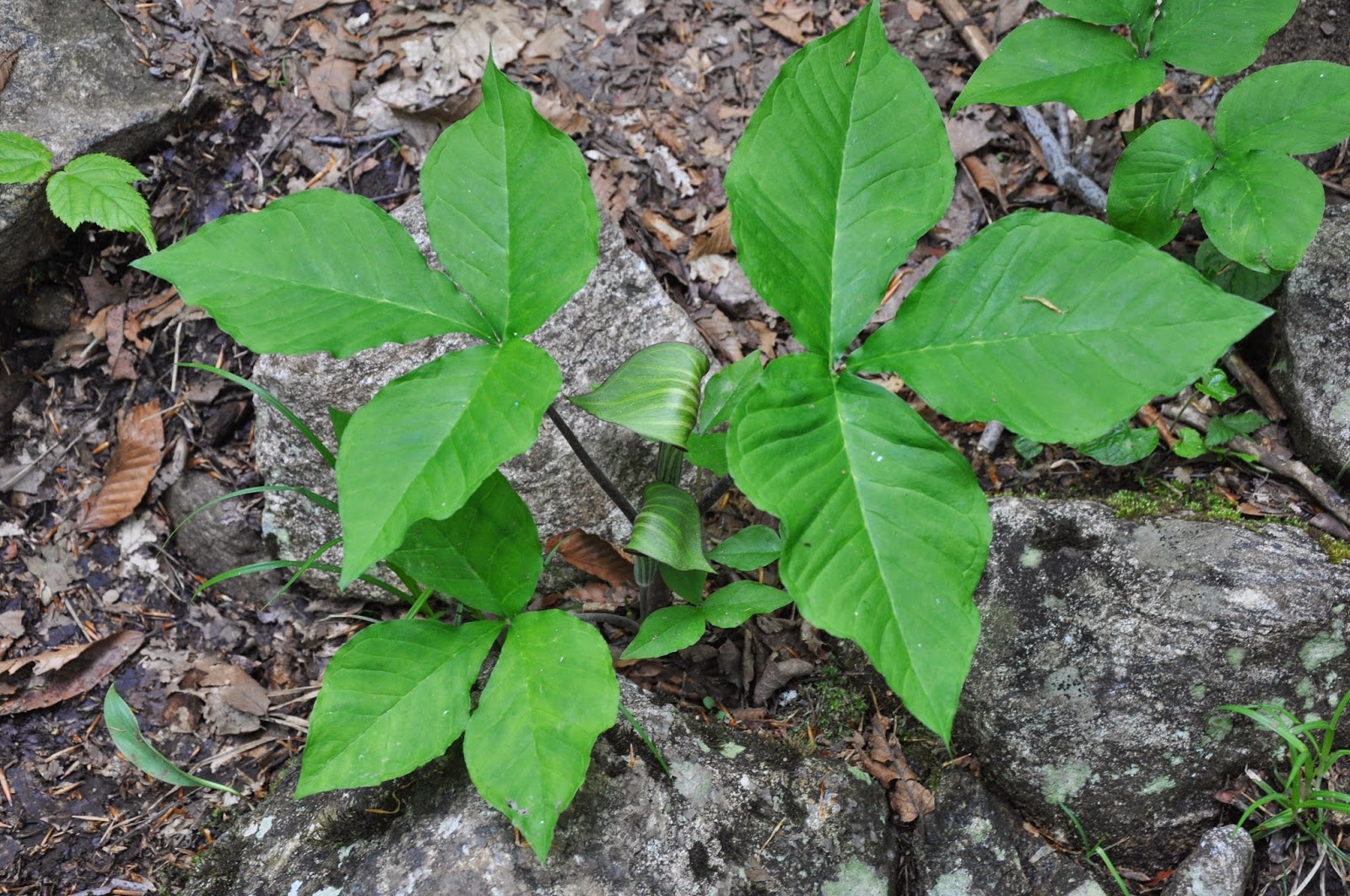 It was nice to see the old barn was still standing. 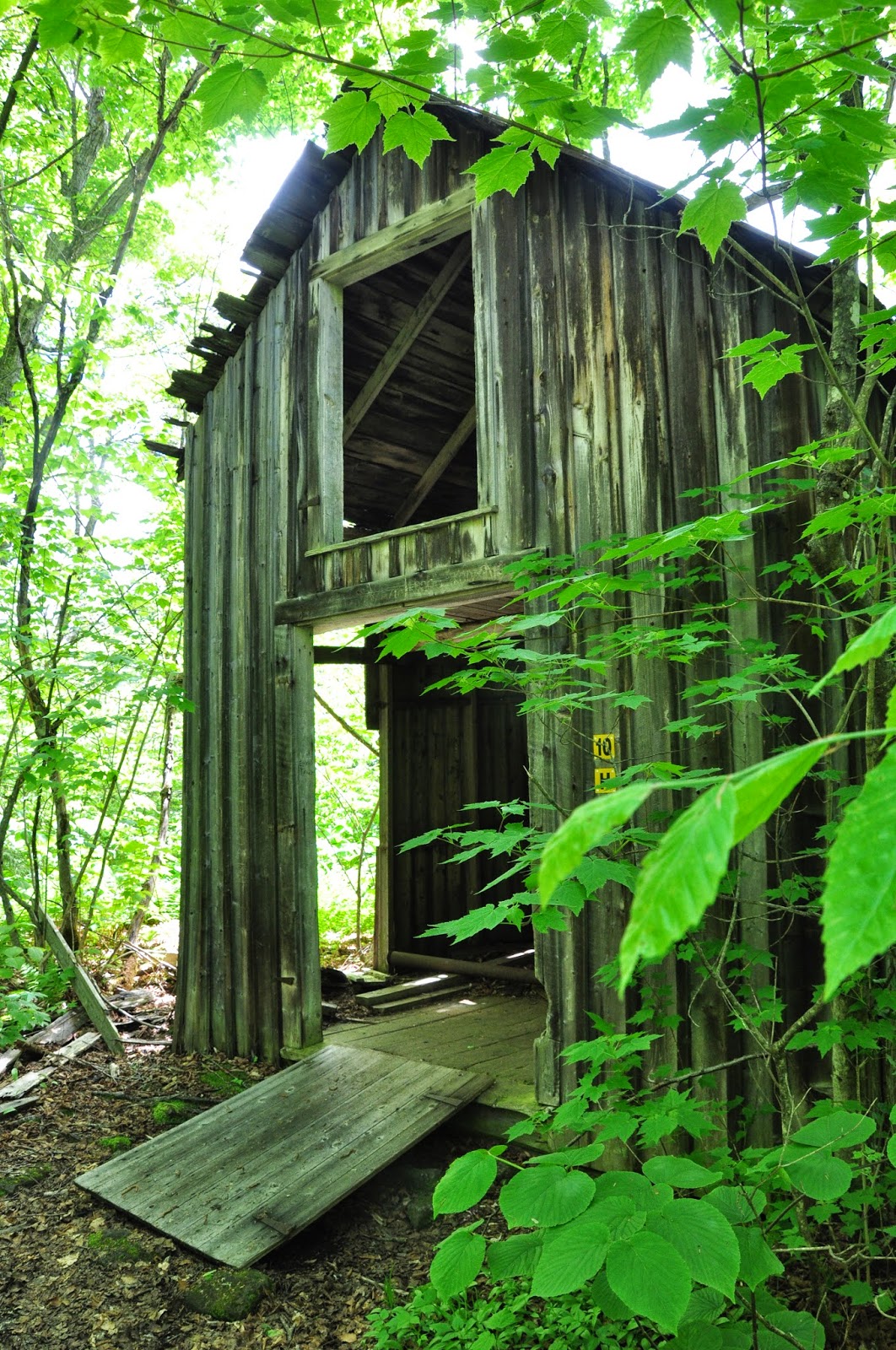 Again, as we got further up the mountain, we encountered some more flowers, like bunchberry 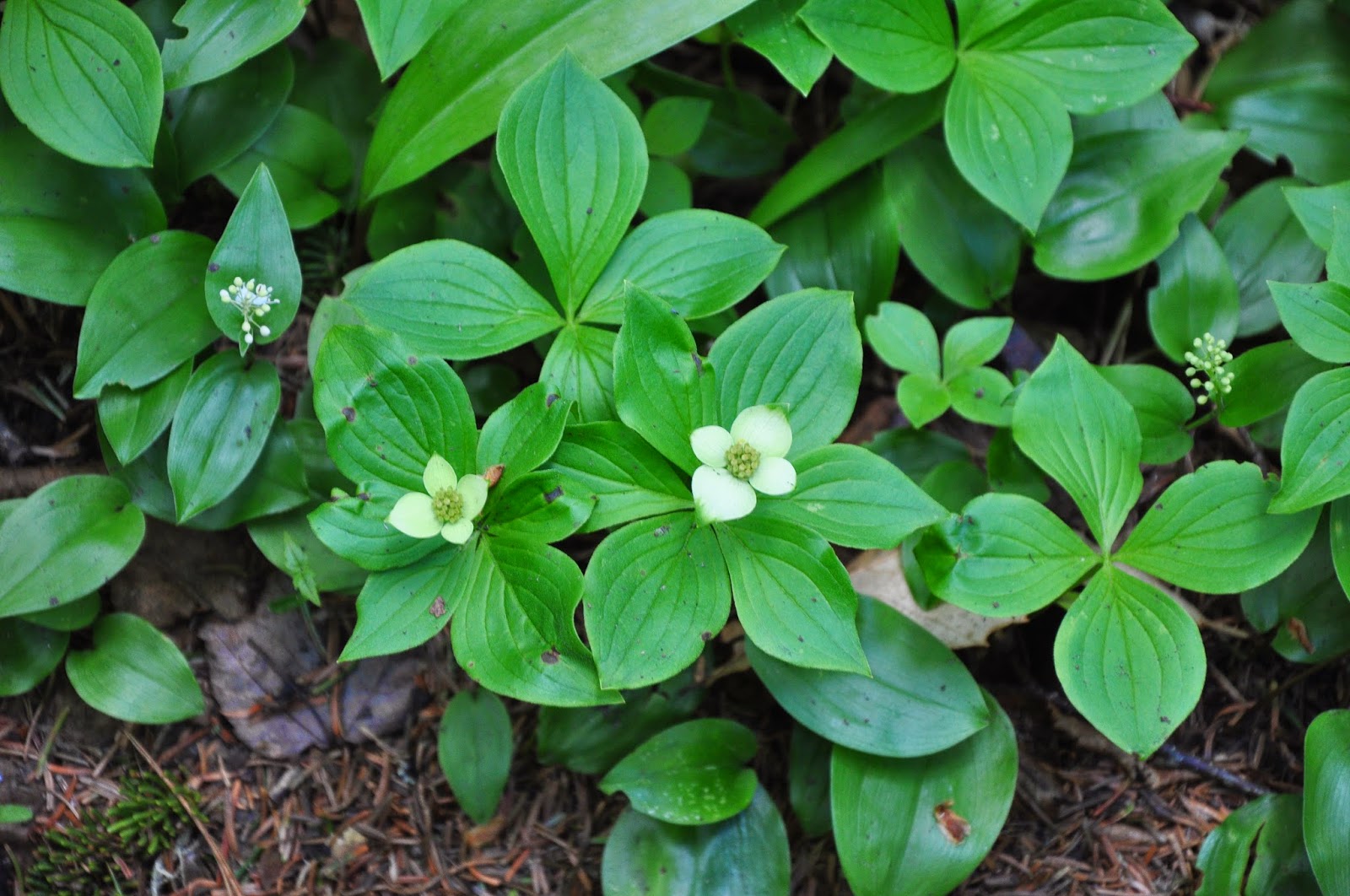 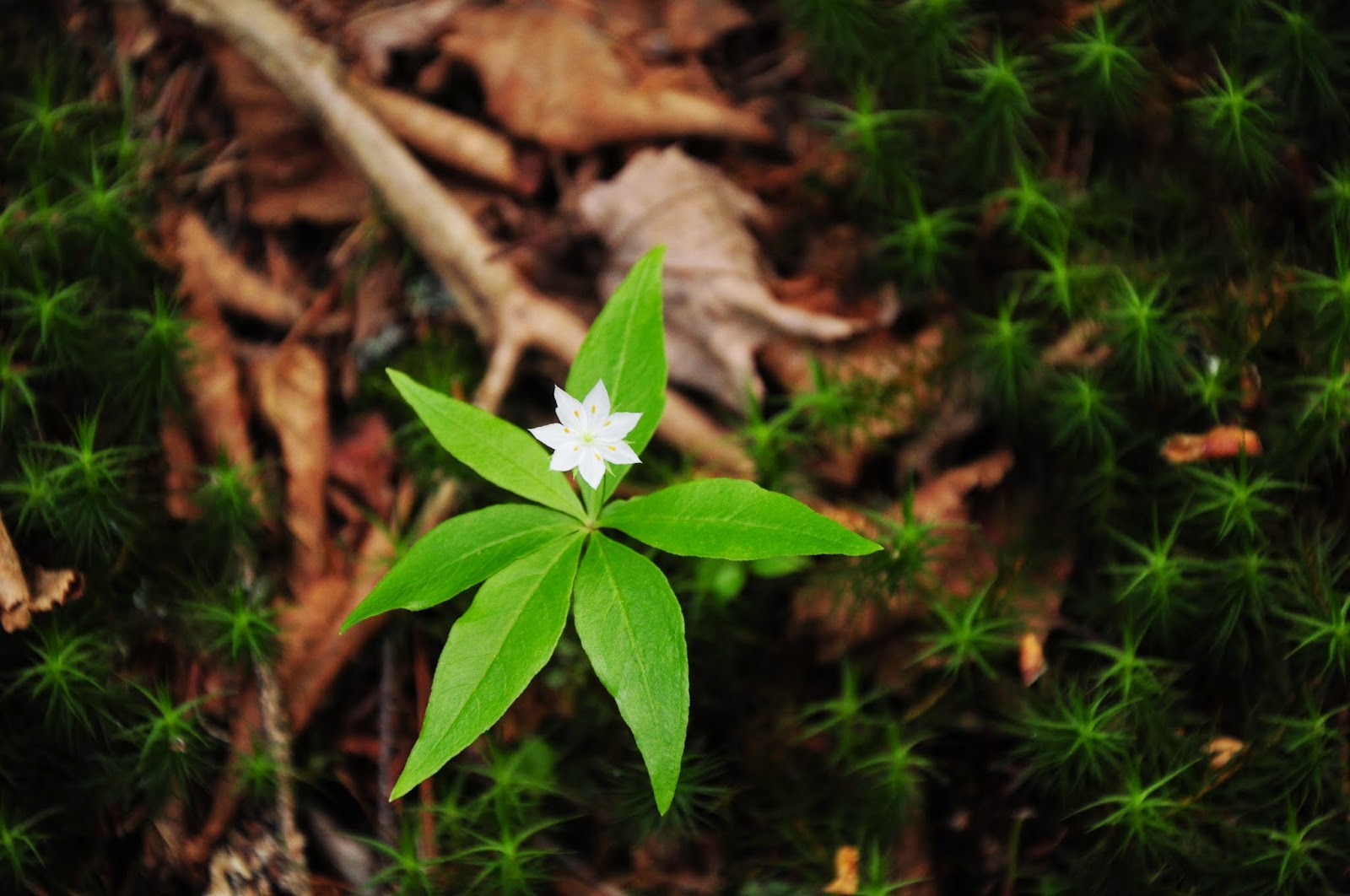 and yellow clintonia, or bluebead lily. One of my favorite spots on Goodnow is the ledge one reaches before the top - it has a wonderful view to the southwest of the mountain.  The trees are starting to group up here, so the view is getting a little occluded, but it is still lovely. 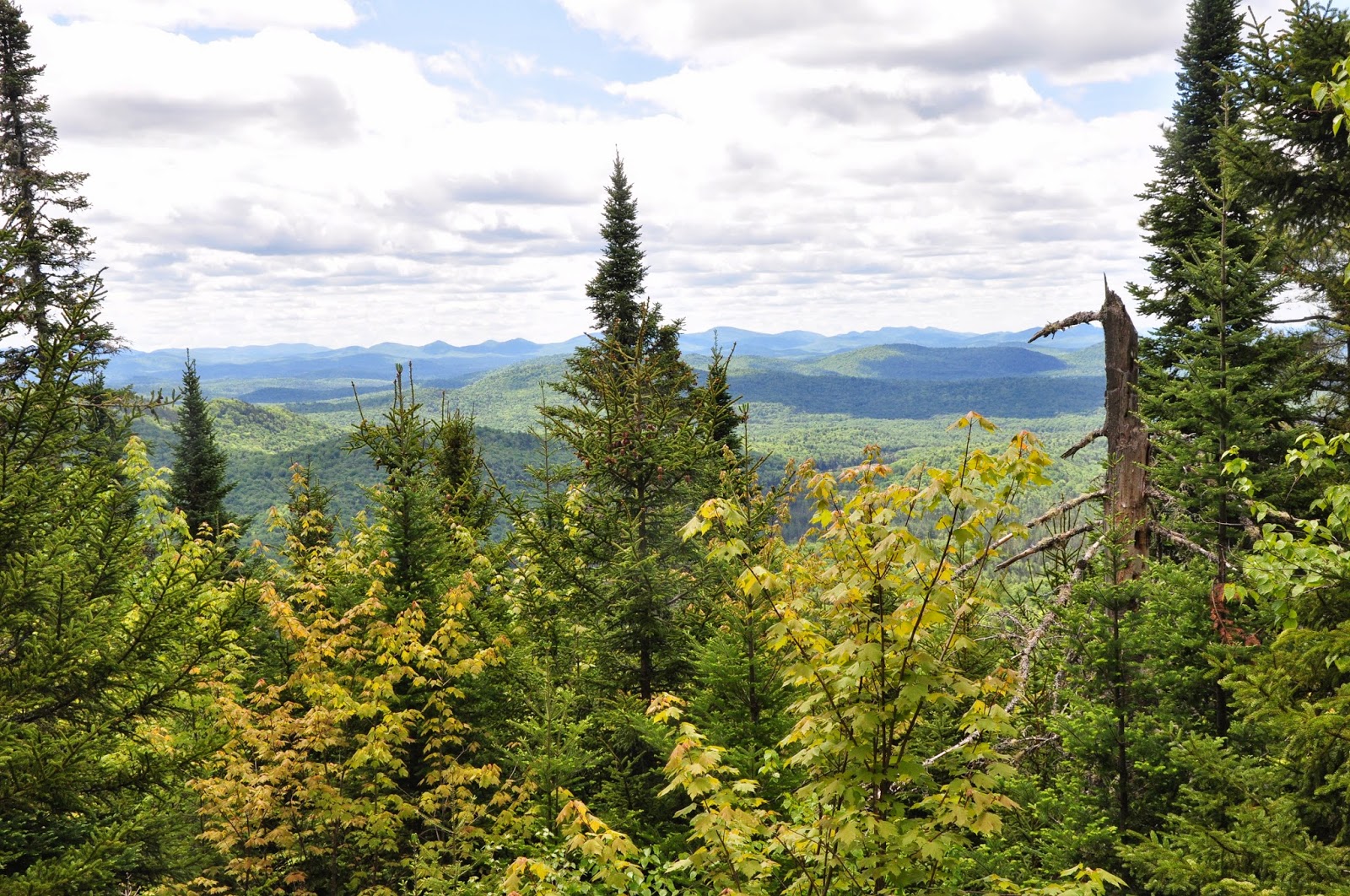 We found two goldthread flowers - the only ones we found all during the trip this week.  It's late in the season for them, so I was glad to see these two. Goldthread is one of my favorite flowers:  up close it is so beautiful and intricate. 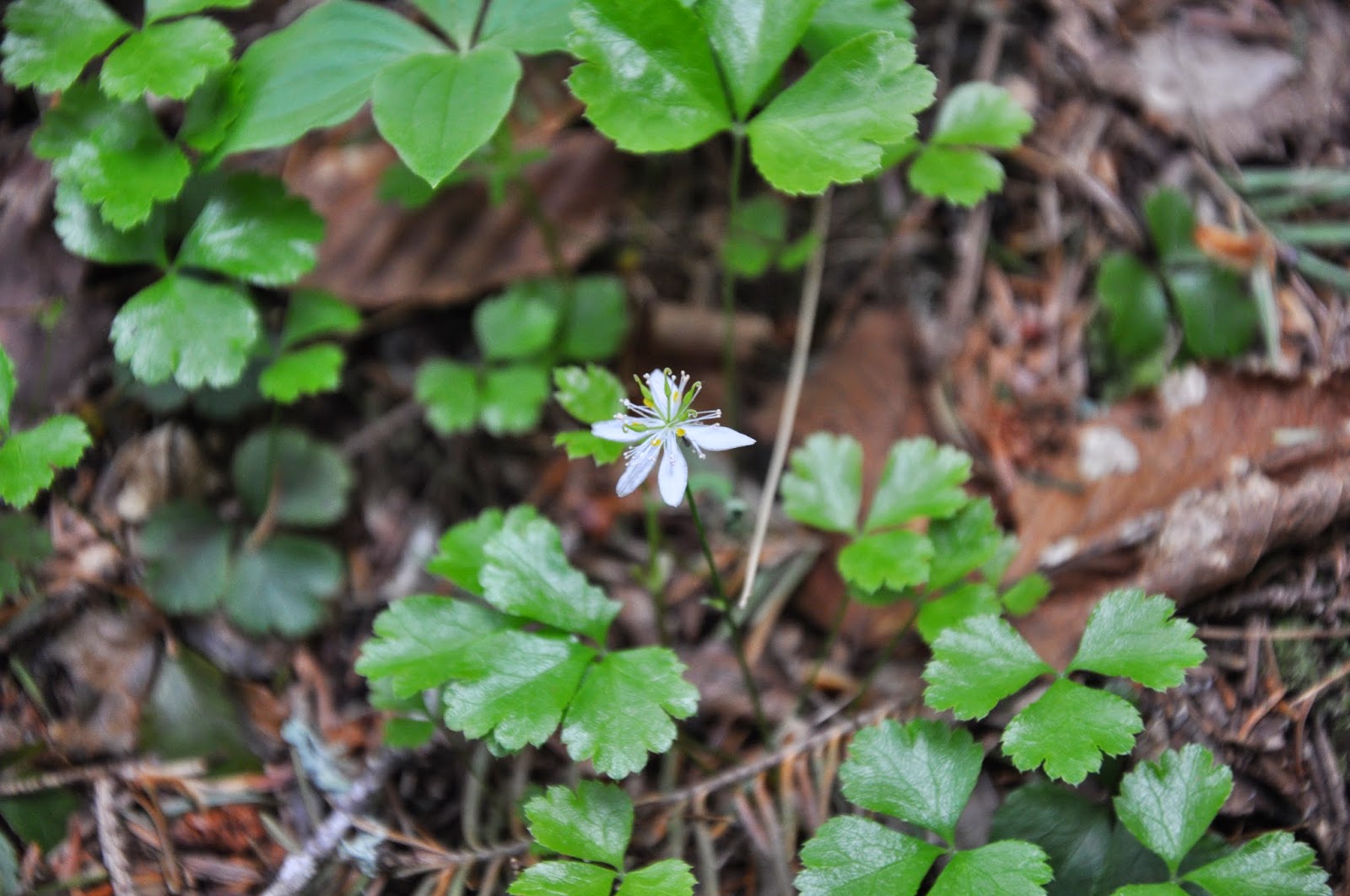 Finally, we reached the top!  All we had to do now was climb the tower. 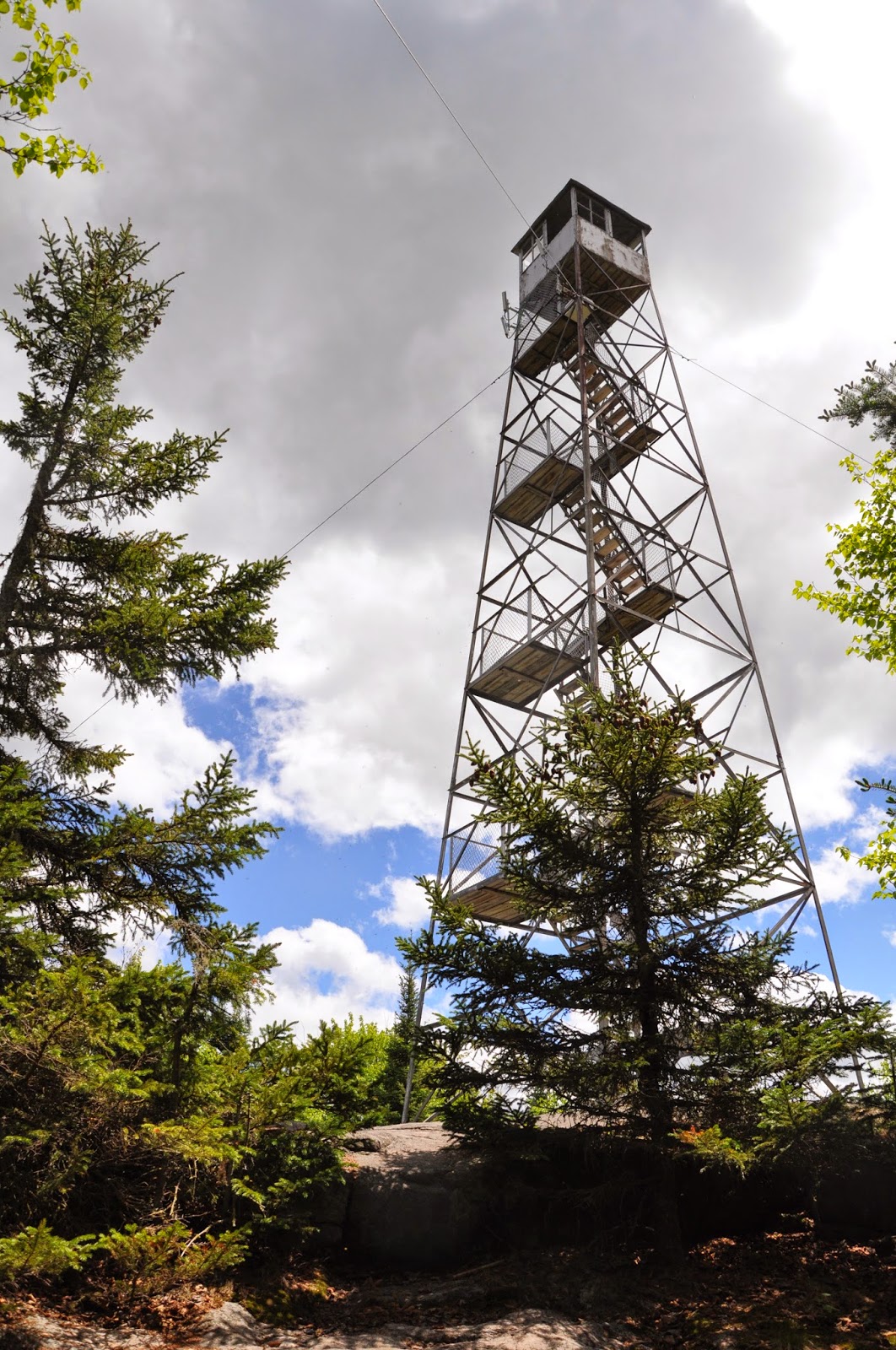 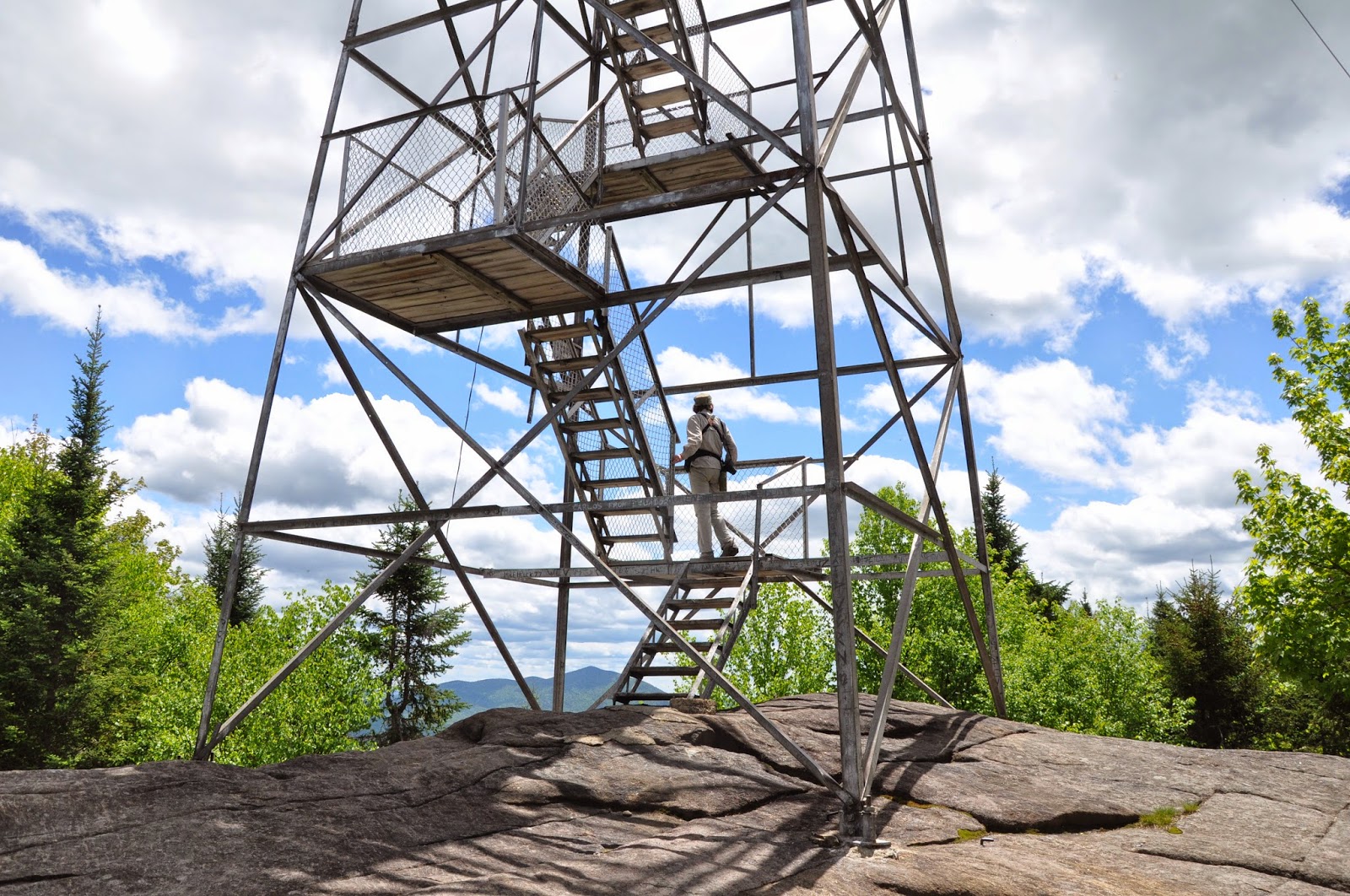 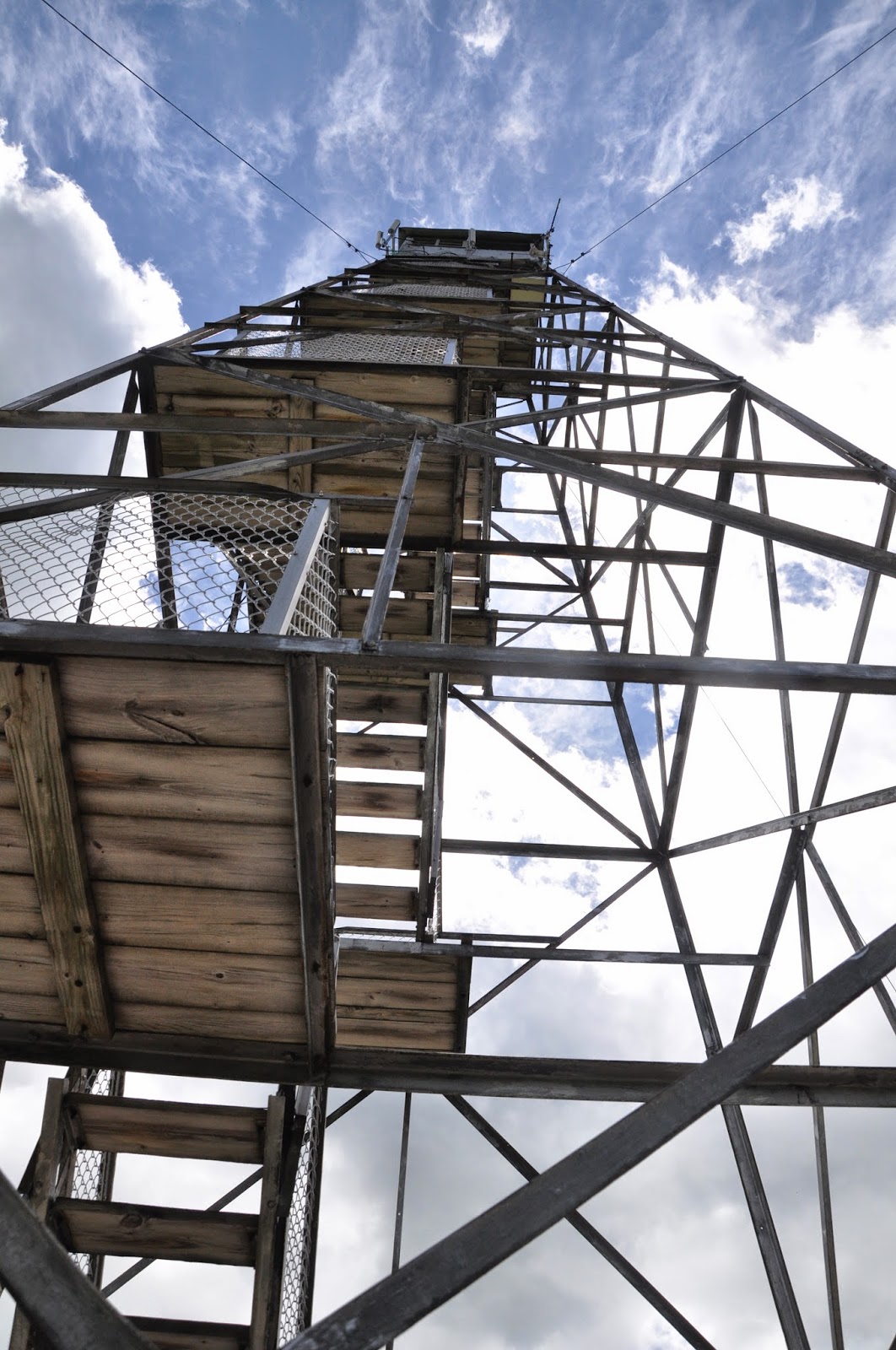 The view from the cab is worth the climb. 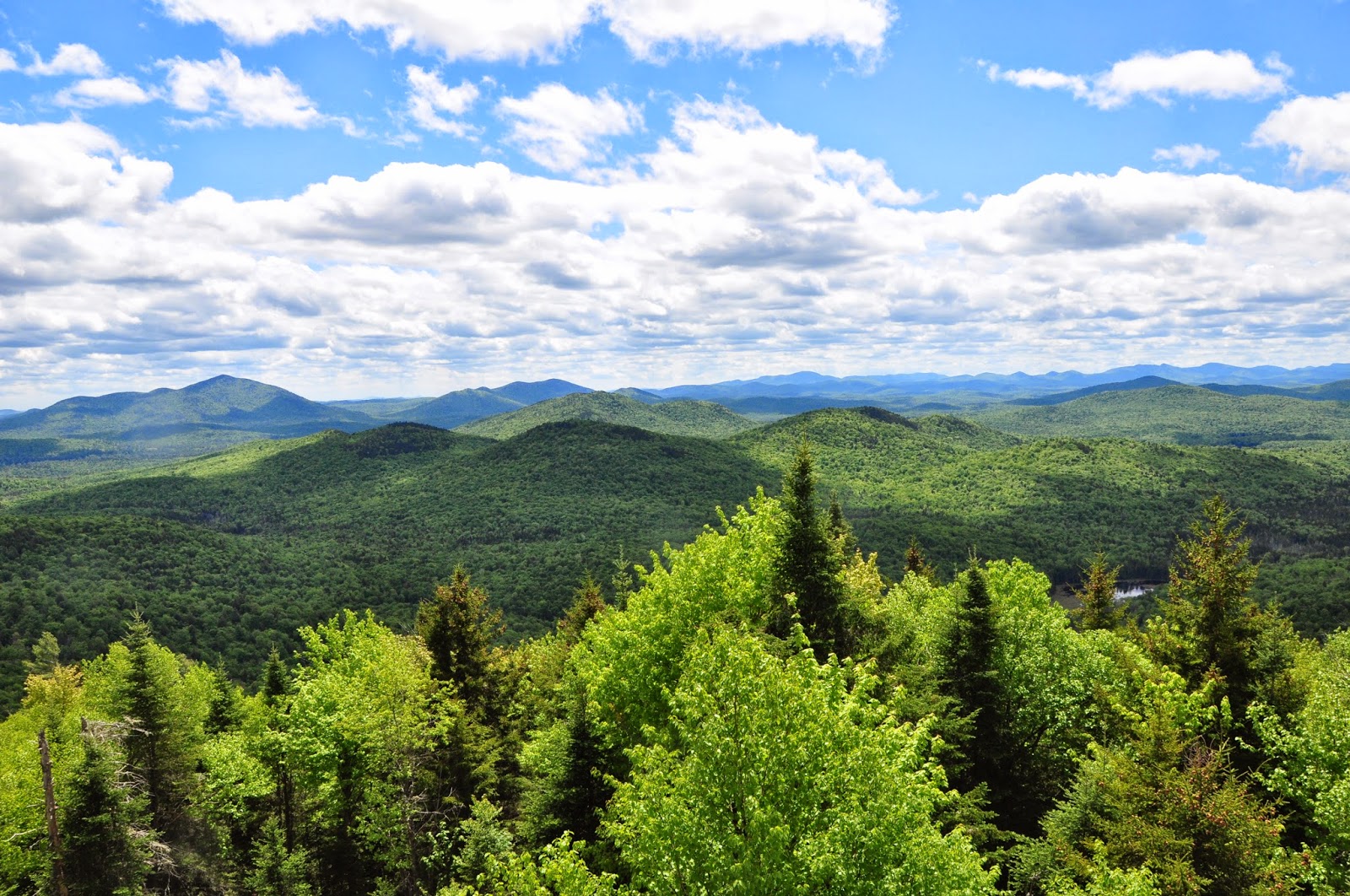 Because I was going so slowly, we ended up about two hours behind the planned schedule, but this allowed us to see many of the plants along the way, like this witch hobble with two remaining flowers.  Like the goldthread, this was the only one we'd see all week that still had flowers. 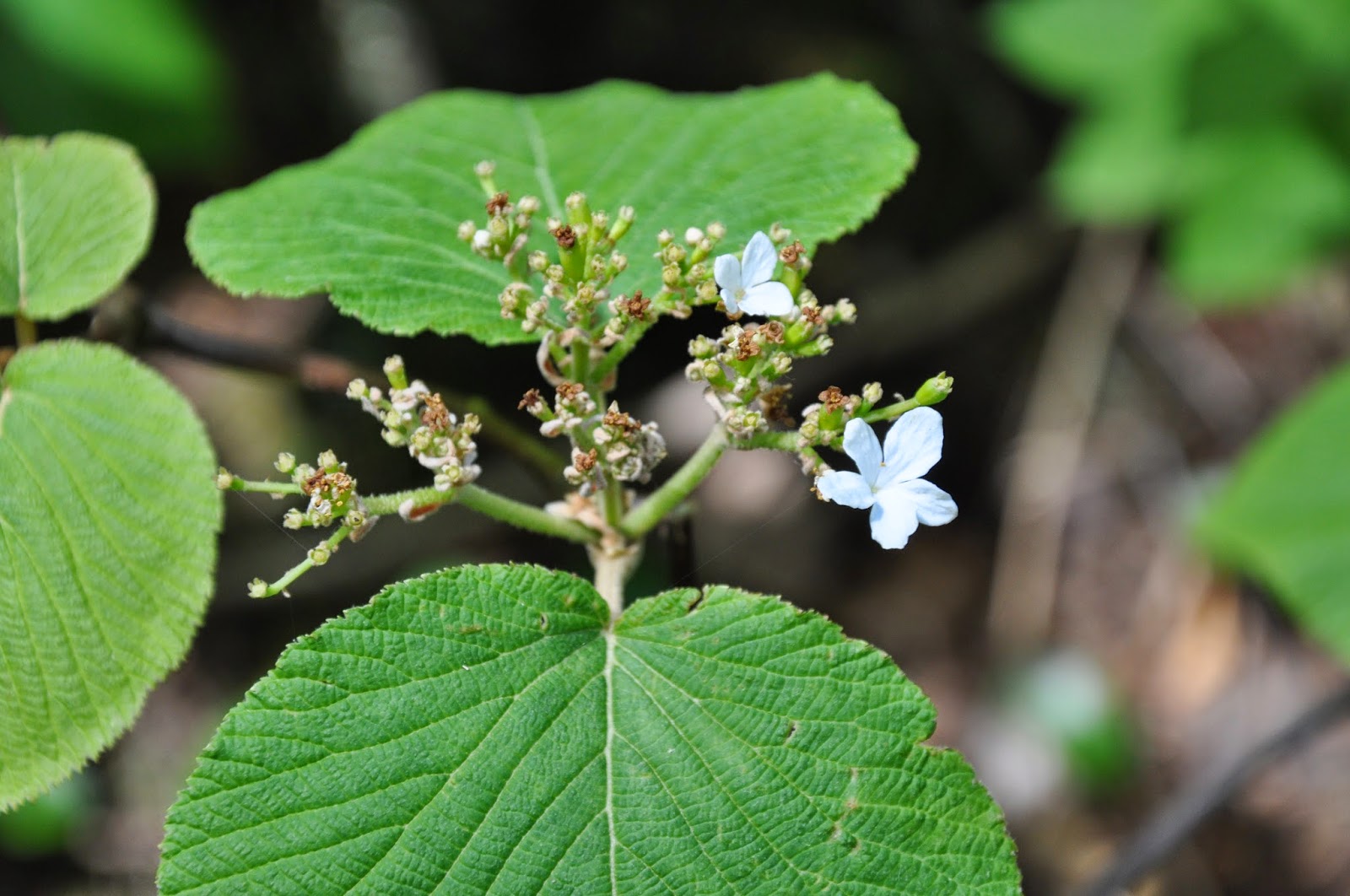 On the way back down, we saw the Face Rock.  How did we miss is on the way up?  This is a fair-sized glacial erratic, so I can't imagine how we didn't see it before! 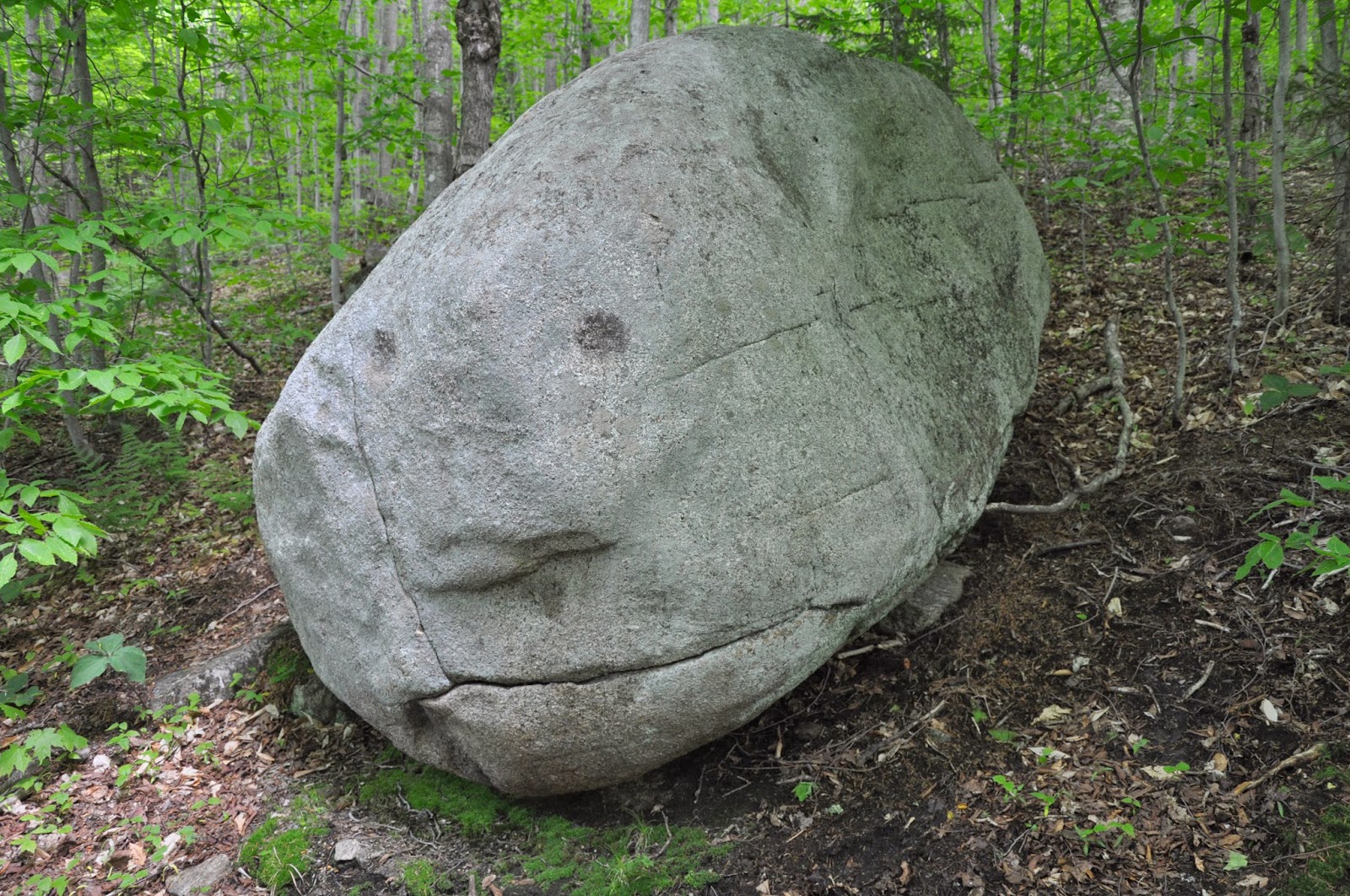 Upon reaching the parking lot back at the base of the mountain, Libby and I jumped back in the car and dashed off to the VIC to meet up with the rest of our group, who turned out to have headed into Newcomb for lunch while waiting for us.  We found them at the Newcomb Bar and Grill.  After collecting them, we headed on down Route 28N to North Creek, and from there to the Ice Meadows at The Glen.