Inventory at the VIC

The sun was out and we had a full complement of staff in, so I hit the trails this morning - wanted to get a full accounting of what was currently in bloom. Here are my findings, in no particular order.


Ferns - fiddleheads galore, of all species and wooliness. These first two are some species of wood fern. I love how the first image looks like a head and two arms outstretched as if to welcome the sunshine. 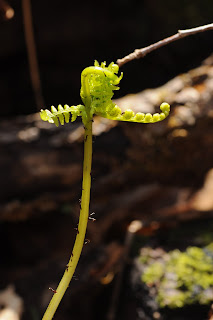 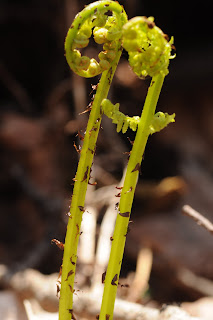 This fern, which may be a bracken fern, looked to me like a bunch of fists all bunched up. 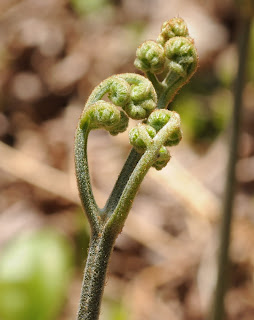 And these extremely woolly fiddleheads I think are cinnamon ferns, but I could be wrong. Until they are fully unfurled, my fern ID skills are pretty poor. 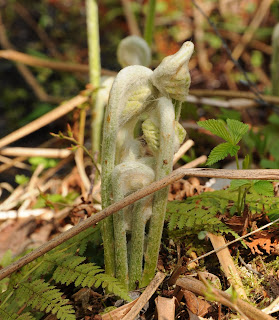 The red, or purple, trilliums have been in bloom for over a week now, 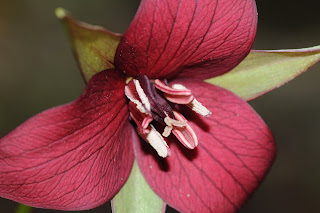 but the painted trilliums have only just started to open. This one has to be about the smallest trillium flower I've ever found. 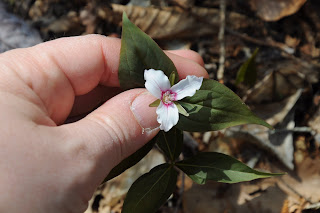 It will be a while yet before the starflowers open, so I was surprised to see a bud already formed on this plant. 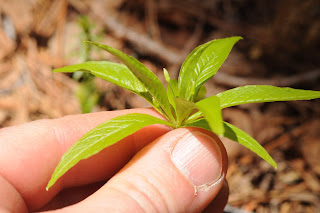 At first I thought this was a pile of scat, but a second glance told me they were mushrooms. There were about a half dozen of these brown knobbly 'shrooms along the side of the trail. False morels? This was my guess, and when I got back to the building I looked 'em up. False morels indeed - Gyromitra esculenta. Poisonous. According to my mushroom book, many people can eat this mushroom with no ill effects, but in Europe hundreds of people have died from doing the same. The effects from eating it are delayed, occuring 4-6 hours after ingestion. Even those who have eaten it without problems in the past are liable to eat it one time too many and not survive. It is best to leave this mushroom alone. 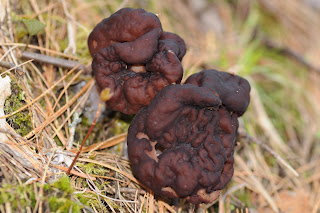 My walk took me past the beaver complex, and I was very surprised by what I saw. The water level was waaaay down. As in several feet. In this shot you can see the lodge, complete with formerly underwater entryway and the winter's food remains (all the sticks). 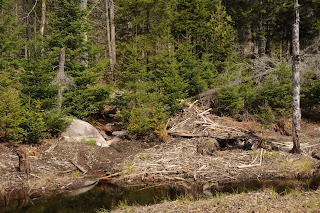 The dam was high and dry. 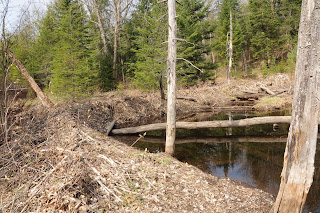 I followed the sound of gurgling water and about at the center of the dam I found this rushing leak. HM. Is this Mother Nature's work? I wonder if the beavers have moved on, for even the lower dam next to the bridge was draining from three breaches. I'd think that if the beavers were still here, they'd be patching things up. This pond bears watching over the next few months. 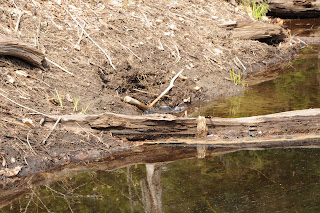 I was surprised to see this lone myrtle (or periwinkle) growing on the trail. We have a healthy crop of this non-native plant growing on the slope right at the entrance to the VIC. Did this one travel courtesy of some animal? 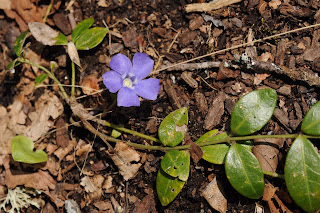 While I'm not a big fan of witchhobble/hobblebush (it reminds me of hydrangeas, and I'm not terribly keen on them), I do love the leaves, especially when they are young and full of pleats. 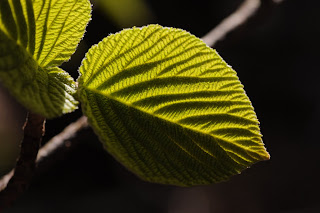 The young flower buds are still quite green, 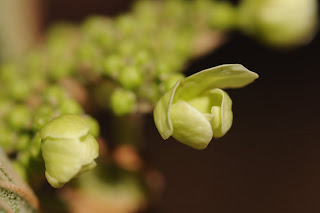 while the fully-opened flowers are completely white. 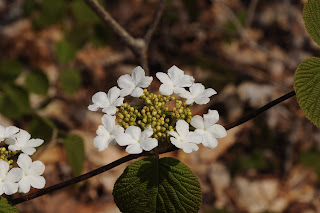 This plant was a new one for me. I had no idea what it was. 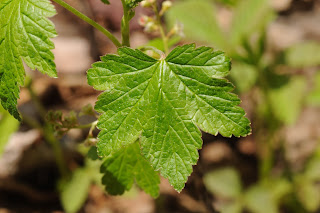 The tiny flowers were stunning up close. Note the little red pollen packets, 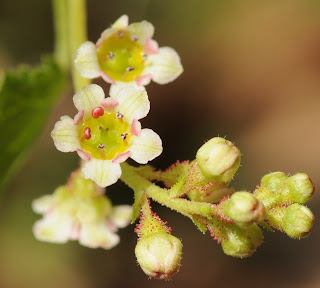 which are missing in this particular blossom. Keying it out when I got back to the office, I discovered this was skunk current, Ribes glandulosum. Or at least I'm pretty sure it is. If I had crushed part of the plant and sniffed, I'd know for sure, for apparently it smells like its namesake. I'll have to do the scratch and sniff test the next time I'm out there. 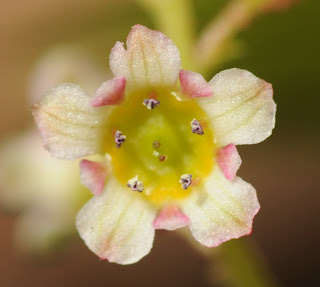 And, as mentioned yesterday, the shad have started to bloom. In my book, a blooming shadtree is as nice, if not nicer than, a cherry tree. It's delicate, it's wispy, and just the epitome of springtime beauty. 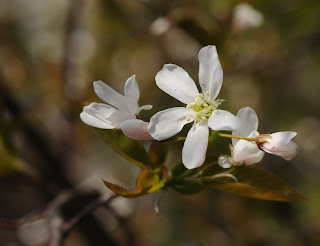 At first I was confounded by this spike of tiny buds/flowers. After careful consideration and investigation, I finally determined that it was a foamflower not yet in bloom. I imagine in a week or so the flowers will be out. 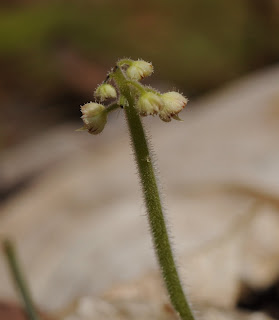 This was another plant that threw me. As soon as I saw it I knew I must know it, but for the life of me I couldn't remember. Back in the office I tried keying it out - not easily done without the flowers actually blooming. Even my boss took a look and said "I know I know it." I paged through a picture guide to wildflowers and just as I said "duh!", she said "baneberry." Yes, it is red baneberry. 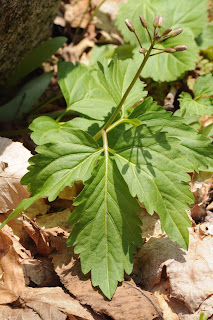 And here is the reason I wanted to go out on the trails today: spring beauty. It is a flower that is so well-named. I've rarely seen it since living up here, so it is a special treat to have it along the Sage Trail. 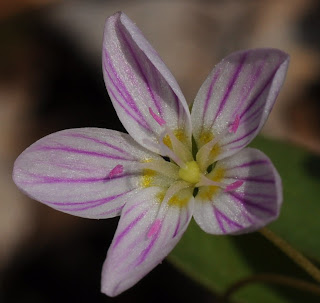 And right close by the spring beauty, is our other early bloomer: trout lily. 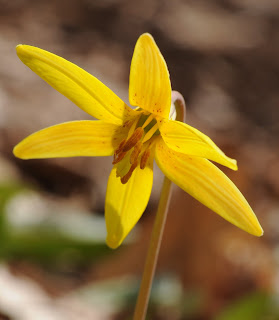 I think the back of the flower is as lovely as the front. 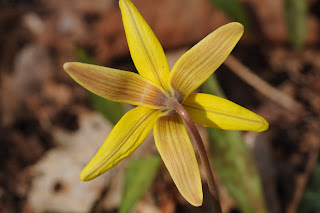 Do you see something hiding behind the petals? 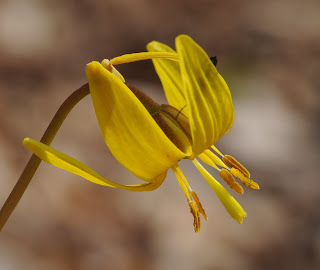 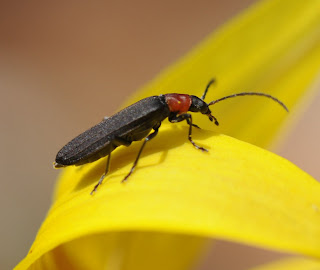 This red-eyed fly was another great find. It was hanging out on the skunk current. I'm still trying to get an ID on ths one. Update: While a great photo, this doesn't provide enough information (like a good view of the insect's abdomen) for an ID. Pity. Still, I do like the red eyes and think it's a nifty shot. 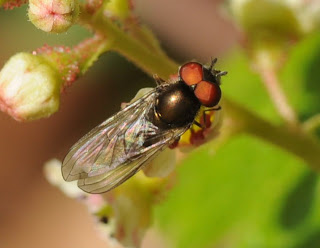 And here we have yet another fly, this time visiting a spring beauty. Again, I'm awaiting ID confirmation. Update: The good folks at BugGuide have decided this is a Tachinid fly, of the genus Siphona. My photo just doesn't have enough information to provide a more detailed ID, but I'm happy with what I got. 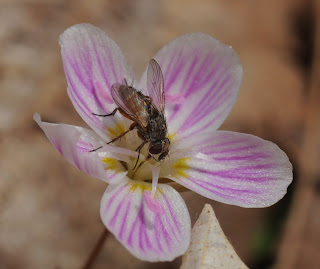 All-in-all, a great day on the trails!
Posted by Ellen Rathbone at 2:52 PM