The weather alternated from misty drizzle to actual rain, but we forged ahead. After meeting up at The Glen, we drove the short distance down the river road and parked in a sandy pull-off. A narrow footpath was partially obscured by the soggy vegetation, but we made our way through the woods towards the river.

Along the way we encountered some lovely patches of Golden Alexanders (Zizia aurea), lovely plants that unfortunately look a lot like cow parsnip, a plant to avoid because it can burn your tender flesh. 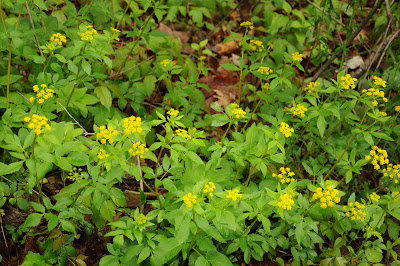 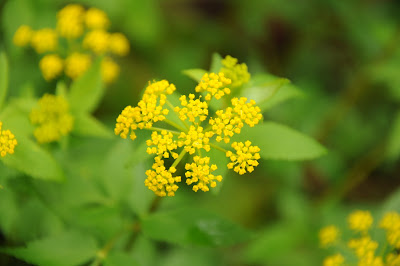 And poison ivy (Rhus radicans) was everywhere. We saw some with flower buds just starting to appear, 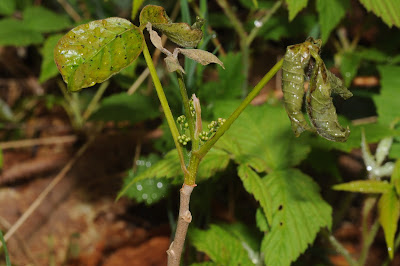 and some with last year's berries. Poison ivy is a hugely beneficial wildlife plant and one we should be willing to let live. Sadly, it has gotten a bad rap because many people are allergic to the oil (urushiol), which can cause a "contact dermatitis." I made sure not to touch it, altough my boots and pant legs certainly came in contact with a fair amount. Still, despite taking boots and pants off at the end of the day, I have not suffered any ill effects. Perhaps I'm one of the lucky ones who aren't allergic. 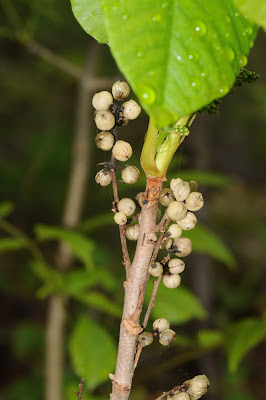 Here we are at the Ice Meadows. This area is one of the very few native grasslands left in New York State, which makes it extra valuable. The name "ice meadows" comes from the fact that during the winter the ice on the river (frazil ice) piles up here, sometimes fifteen or more feet deep. This is heavy, hard-packed ice, which grinds along these cobbled lowlands as spring's warm weather starts the melt. Patches of ice can be found along these shores long after the rest of the area has been snow- and ice-free. 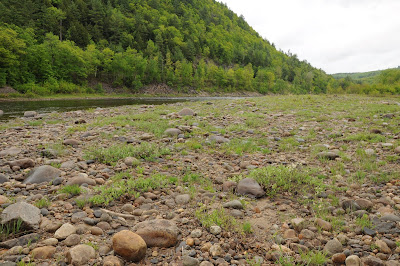 The river cobbles are indeed beautiful. I suddenly felt like a kid again, wanting to pocket every pretty rock I found. But these rocks are not tiny - one or two are enough to fill any pocket, and weigh them down. One will only want to schlepp these rocks just so far. 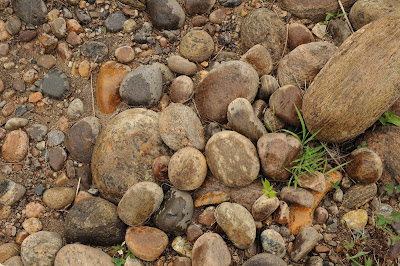 In some areas little pools were formed. We heard several frogs and even a trilling toad (first of the season for me), but we didn't see any. 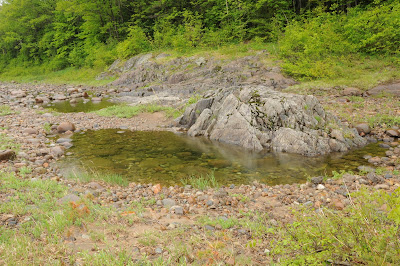 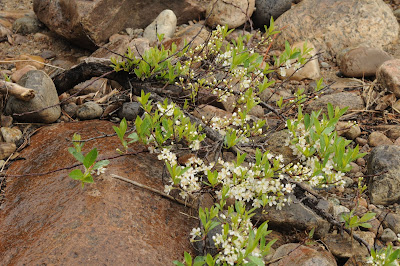 This low, creeping shrub was in full bloom, filling the air with its delicately sweet scent. Everywhere we turned, there it was - either a whole shrub or a lonely sprig. Dwarf sand cherry is listed as a rare plant on the New York State Natural Heritage Program page (www.acris .nynhp.org/report.php?id=10009). 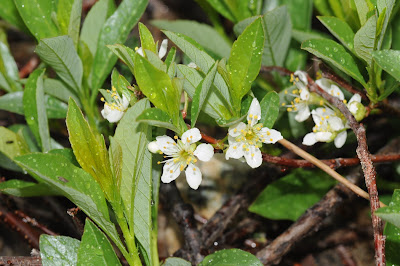 Another great find was this really beautiful plant. To my untrained eyes, it looks like a lovley grass, but it is actually a sedge. Specifically, it is Buxbaum's sedge, or brown box sedge, (Carex buxbaumii). NY's Natural Heritage Program also lists this as a rare plant. Interestingly, neither of my grass/sedge ID books lists it. For me, it was the black and green pattern of the flower scales that caught my eye and imagination. This plant is not yet in bloom, but it should be shortly. 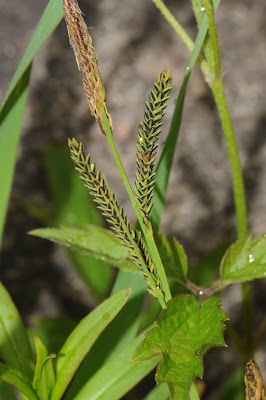 Because this was my first trip to the ice meadows, I was able to add a few new plants to my life list. Star-flowered Solomon's seal (Smilacina stellata) was one of them. Thanks to the low light of the day and the increasingly windy conditions, I regret to say I didn't get very good shots of this lovely plant. While the flowers are nice, it is the pattern of the leaves that enchanted me. 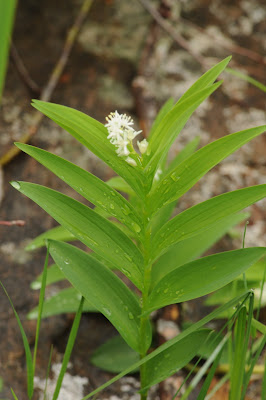 Here's a close-up of the star-shaped flowers: 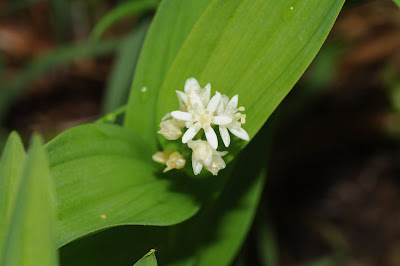 Because this was a wetland, it was no surprise to find sweet gale (Myrica gale) along the way. Previously I have posted photos of the female flowers; here are the male flowers. 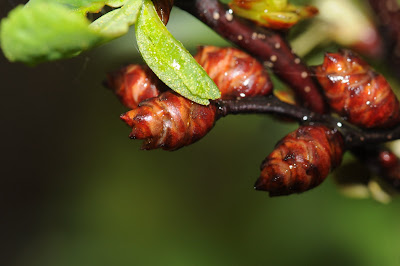 The marsh St. Johnswort (Hypericum virginicum) was struggling along among the rocks. Its lovely pink and green colors were delightful to see on this grey day. 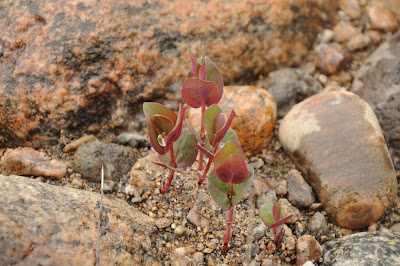 Jackie was eager to check out all the violets we found. They were dutifully photographed and examined in an attempt to secure an ID. Violets are difficult, she asserts, because they easily hybridize. And to make it just that much more difficult, "they" have now decided to lump together many previously distinct species. We didn't have our updated violet ID charts with us, so we made do with Jackie's not insignificant knowledge. 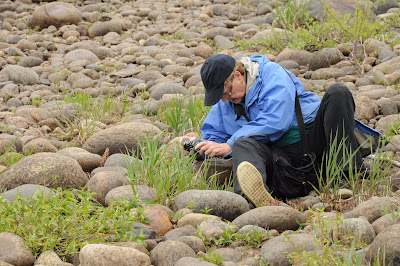 Conclusion, these might just be marsh blue violets (V. cucullata)...unless, of course, they aren't. 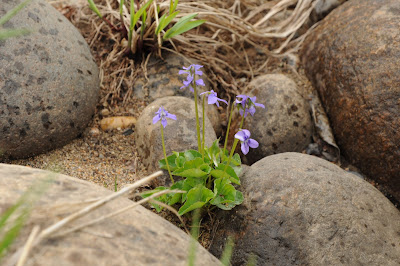 After tripping along the cobbles for an hour or so, we got back in our cars and drove a little further down the river. The ice meadows extend for about sixteen miles along the Hudson here, giving people who are interested a great deal of space to explore. Our next site was quite different from the first: 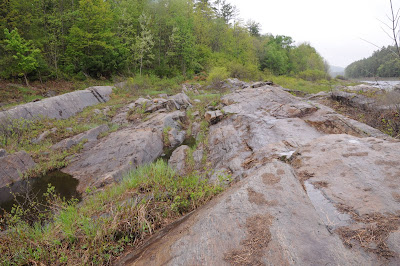 Large up-thrusting slabs of rock made up this stretch of shoreline. 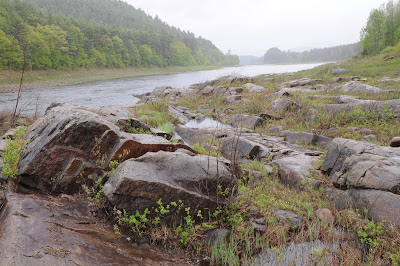 A low, flat area among the rocks was a typical wetland. Thanks to the scouring effects of the ice each year, woody vegetation doesn't get much of a chance to take hold. This is what makes the ice meadows the special habitat that they are.
Clinging to the rocks around the edge of the wetland were some soggy wood anemones (Anemone quinquefolia), aka: windflower. This one was not quite open yet, but I just loved the dark pink color contrasting with the pale pink petals. 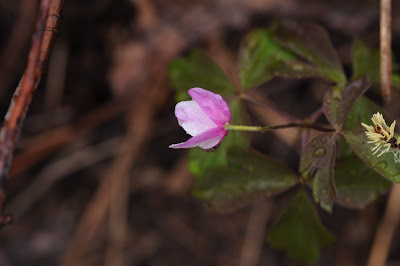 We also found Canadian burnet (Sanguisorba canadensis), which I discovered for the first time last year just on the other side of the river. It is too early for this plant to be in bloom, but we marvelled at its leaves, with the purple outline running along the toothed margins. 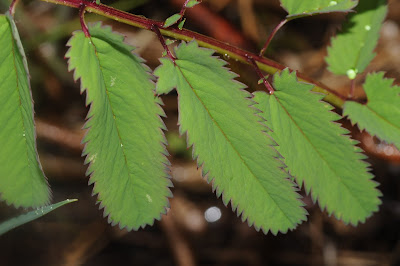 Everywhere we turned, there seemed to be little plant arrangements. This one reminded me of some bonsai "forests" I've seen at garden shows. 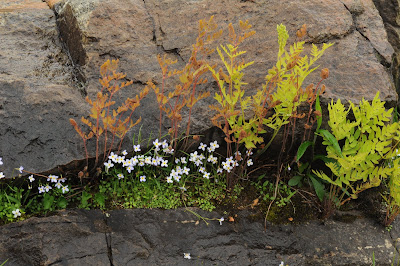 Here was another one made entirely of one species. It was difficult to photograph, but if you click on the photo you should be able to see the plants more closely, with their golden tips soon to flower. I suspect this is another sedge, but it might be a rush. Any experts out there are encouraged to chime in. 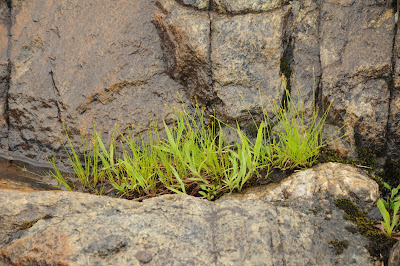 I loved the colors on this newly unfurling fern. 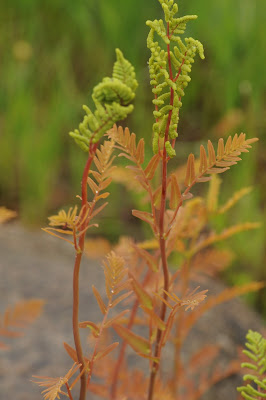 Eventually the constant drizzle began to put a damper on things. Walking on these rocky shores can be a challenge in the best of times, but in the rain, when the rocks are wet, it is even more so. So, after about two or three hours, we finally decided to call it quits. We walked back to our cars along the old railroad bed and each of us headed back towards our respective homes. 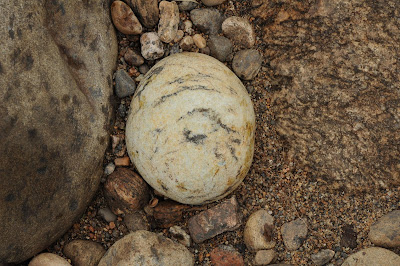