Here we have a nifty rock along the shore of Rich Lake 9 July 2009: 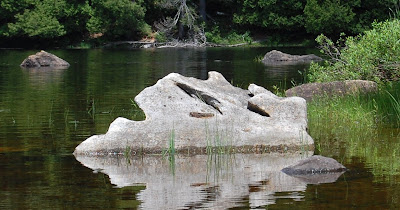 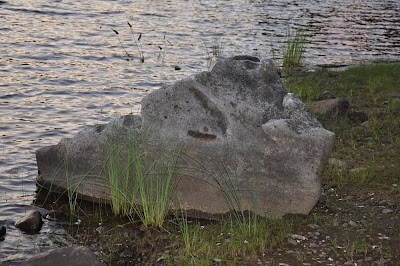 All those lovely protrusions have been worn away! [Or at least they look that way from this angle. Admitedly, I was out in a canoe when I took the first image, and on shore for the second, which could make some of the protusions seem smaller due to angle.] What was a beautiful, fanciful rock appears to be a worn stub. Wind, rain, ice, snow...weather can be a bummer for a soft rock.
We tend to think of erosion (especially on rocks) as something that occurs over geologic time, not within a year. Yet it can be a powerful force that can leave its mark in a short period of time. Some rocks weather a lot more quickly than others.
Around here, we have a lot of limestone and Grenville marble (or perhaps the Grenville marble is limestone based?). These are soft rocks.
Not being great at geology, I've asked my friend Lesley, who runs a rock shop over in Long Lake (Minerals Unlimited) if she could help me out here. Without actually seeing the rock up close and in person, all she could say was it looks like a type of limestone.
Still in need of info, I searched online for some kind of definition of limestone and marble. Here's a great description I found at http://pubs.usgs.gov/gip/acidrain/4.html:

The main difference between limestone and marble is that limestone is a sedimentary rock, typically composed of calcium carbonate fossils, and marble is a metamorphic rock. Limestone forms when shells, sand, and mud are deposited at the bottom of oceans and lakes and over time solidify into rock. Marble forms when sedimentary limestone is heated and squeezed by natural rock-forming processes so that the grains recrystallize. If you look closely at a limestone, you can usually see fossil fragments (for example, bits of shell) held together by a calcite matrix. Limestone is more porous than marble, because there are small openings between the fossil fragments. Marble is usually light colored and is composed of crystals of calcite locked together like pieces of a jigsaw puzzle. Marble may contain colored streaks that are inclusions of non-calcite minerals.

If you paddle around Rich Lake, when the water levels are low, you will see lots of rocks that look like creative sculptures. The softest portions have worn away, leaving the harder, more resistent rock behind. Some, like my rock above, can be quite lovely.
Posted by Ellen Rathbone at 2:18 PM

Email ThisBlogThis!Share to TwitterShare to FacebookShare to Pinterest
Labels: erosion