Part II a - The South Side of the River

I was so determined to find the ragged fringed orchid, that when the dog and I returned from the vet's, about 3:30, I drove once more to the Ice Meadows. I figured I still had a few hours of daylight left, and the storms they were predicting didn't sound like they were going to hit our neck of the woods. I was a naturalist obsessed.

So, back I drove, this time hitting the south side of the river. I had two choices here: the poison ivy trail that led to the cobbled beach, or crossing the railroad tracks and walking where it was grassier. Based on the photos Jackie published on her blog, I headed for the railroad tracks.

The marsh St. Johnswort (Triadenum virginicum) was blooming on this side of the river (it was just tight buds on the north side). Are these stunningly beautiful or what? They kind of remind me of the wax flowers we used in floral arrangements when I worked at the florist shop in Craig, Alaska. 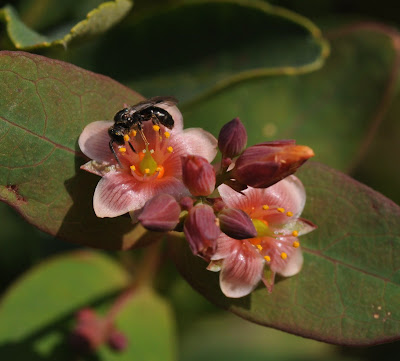 These delightful little yellow flowers were quite numerous right by the water's edge. At first I thought they were birdsfoot trefoil with most of the blossoms missing, but then I remembered Jackie mentioning horned bladderworts (Utricularia cornuta). This had to be them. 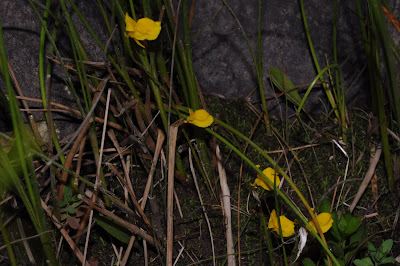 A closer look proved that indeed this is what they were. The bladderworts with which I am most familiar grow in the water, and they hunt wee creatures that swim in the water around them. But there are also terrestrial bladderworts, like this horned species, and they also hunt wee creatures, in this case those that are in the wet soil in which they are rooted. Both the aquatic and terrestrial bladderworts have bladders (!), which are essentially under negative pressure. When a prey item brushes against the bladder's hairlike trigger, it mechanically opens, effectively sucking in the prey and its surrounding water (or wet soil). Ah, another pretty face that hides a carnivorous nature. 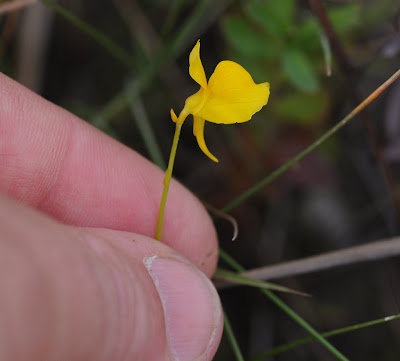 I stumbled upon a patch of racemed milkworts (Polygala polygama). As I wrote before, they are soooo tiny that one really must use a tripod to get a decent photo. I didn't use mine, hence it is blurry. 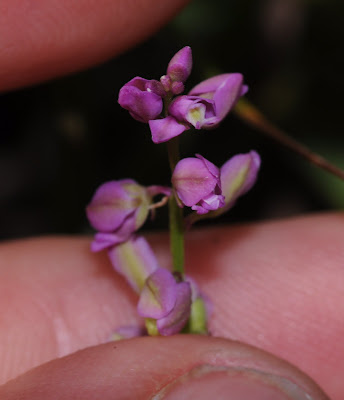 Raindrops were starting to splatter the cobbles. Only a few, but the sky was darkening and I heard a distant rumble. So, I started back. As I stumbled my way across the plant-hidden cobbles, I flash of purple caught my eye. Hidden in the branches of a shrubby dogwood was this lovely purple fringed orchid (the only one I saw). Despite its robust size, this is the smaller purple fringed orchis (Habenaria pyscodes). 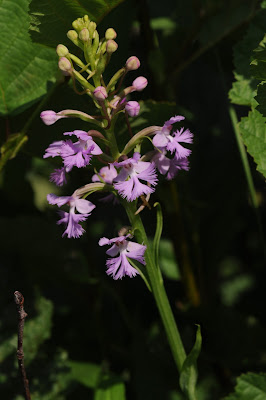 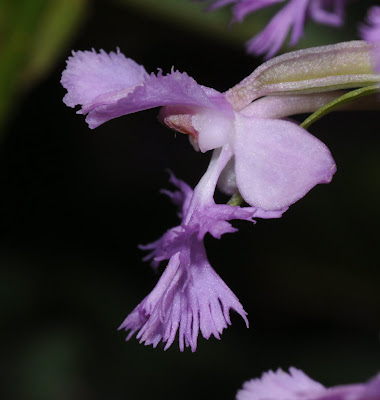 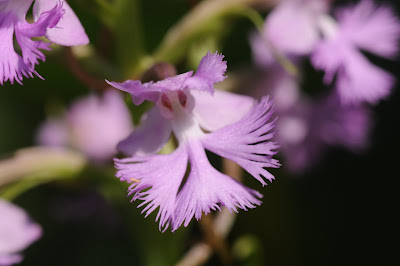 Just as I was leaving the shoreline, this arrowhead caught my eye. They are such simple flowers, but I think that is why I like them so. There's a lot to be said for simplicity. I didn't stick around to key it out though. Most likely it is common arrowhead, but there are three others that are possibilities. I'll have to go back and look more closely to get an ID. 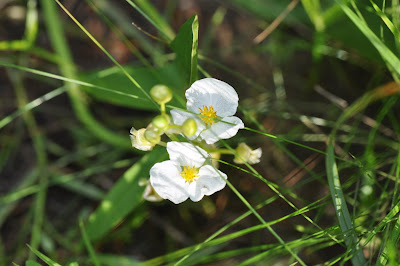 But no ragged fringed orchid. I had to bite the bullet and try upstream.

Part II b - Braving the Poison Ivy
Since the downstream foray proved fruitless for my target plant, I had no other choice but to brave the poison-ivy-lined path to the river. This was the only other location with which I was familiar, although herdpaths down to the river are numerous, thanks to the river's popularity with the locals (they aren't looking for plants - they just want to swim and luxuriate at the river's edge).
The staghorn sumac was in full bloom - I love this plant. And so do the birds - it's a native shrub that is a popular, and important, food for our winged friends. 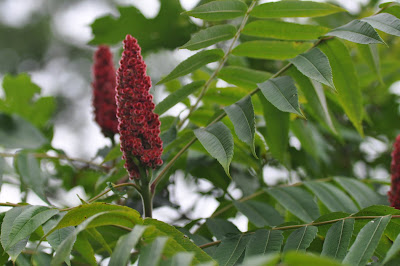 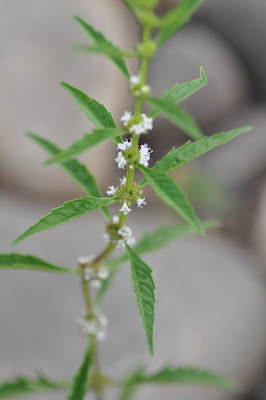 Here are the flowers up close. 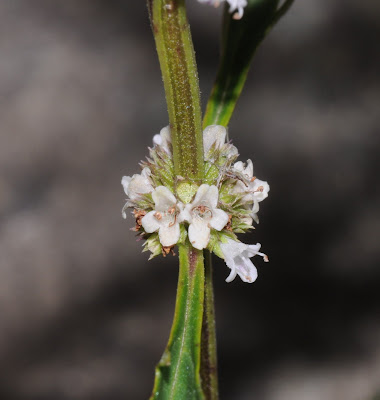 Isn't this a lovely beetle? It's actually GOLD! The closest thing I could come up with in my field guide was Calligrapha mulipunctata, which is a type of leaf beetle. The head and the scale right behind it (pronotum), however, are the wrong color - the scale should be outined with yellow. I have an ID request in to BugGuide and will let you know what they determine. Update: we think it is C. philidelphica, the dogwood calligrapha beetle. C.p. feeds on silky and other dogwoods, while C.m. feeds on willows. 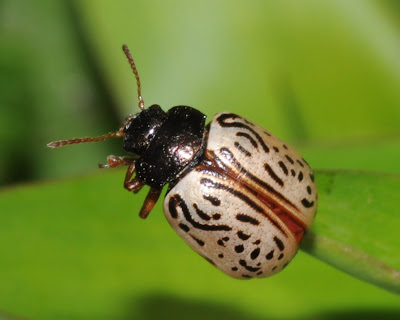 This was the only cardinal flower (Lobelia cardinalis) I found blooming. In a week they should be quite spectacular. 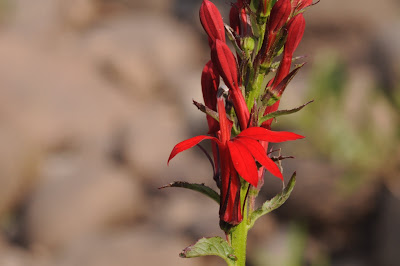 Here's another interesting river cobble. Reminds me of pimento loaf. 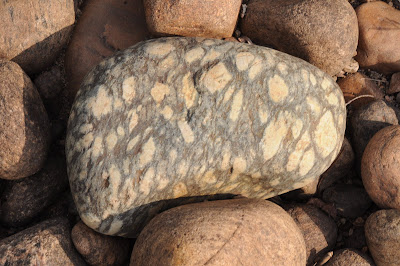 It may look like blue sky, but those are actually dark grey rain clouds. The thunder was rumbling, the wind whipping up, and I finally had to toss in the towel. No orchid was worth being out on the Ice Meadows if an electrical storm was going to hit. 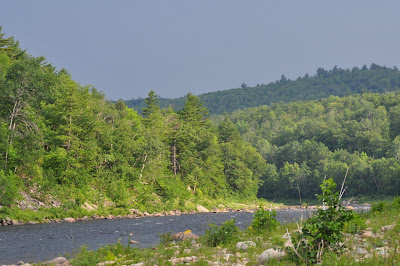 So, by 6:00 I was heading homeward. In the end, the clouds passed over, leaving nothing but a few drops of rain (very few - you could count the individual splats on the rocks).
I've since contacted Jackie - we're going to make another foray on Sunday to see if she can find that orchid again for me. Now that's a good flower friend!
Posted by Ellen Rathbone at 3:16 PM