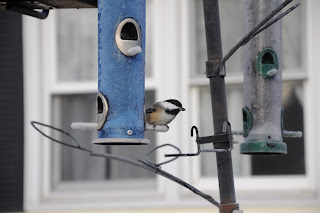 I entered the building and glanced towards the back door. I didn't see the feeder on the hook, so perhaps I did.

Then I saw it.

There on the floor of the deck, a feeder port ripped out, the base pulled partially off, and a chunck missing from the plastic tube, were the battered remains of one of our tube feeders. A raccoon must've gotten it.

The other feeder was empty, too, but it was still in one piece and on its hook.

Chickadees called from nearby trees and shrubs, wondering where the food was.

I gathered up the pieces and upon examination determined it wasn't salvagable. Reluctantly I tossed it in the trash. I filled the remaining feeder and scattered seed on the two platforms, and the birds (chickadees, red- and white-breasted nuthatches, and blue jays) immediately came in to feast.

I guess I will add "birdfeeder" to my shopping list for this weekend.

The moral of the story is: bring your feeders in at night.

Now at home I don't worry too much about raccoons (two of my poles have raccoon guards on them and are placed far enough from trees that raccoons shouldn't be able to reach them). Bears, on the other hand, have a record at my house, having bent over feeder poles, dismantled squirrel-proof feeders (hey, it wasn't marketed as bear-proof), and even running off with feeders into the woods. I haven't had problems since the fence went up and the dog has been around, but I'm sure it is only a matter of time. Every night I go to bed without bringing in the feeders leaves me worrying that I probably should've done so. Every noise outside, then, becomes a potential bear on the prowl.
Posted by Ellen Rathbone at 1:26 PM

Email ThisBlogThis!Share to TwitterShare to FacebookShare to Pinterest
Labels: birdfeeders