Well, those weren't exactly my words, but close. I was sitting here looking at my photo of Orion from last night (I didn't post it before because it's not a great shot), trying to identify some of the stars (like the reddish one in Orion's right shoulder - on your left - that is Betelgeuse), when I hit the "Quick Fix" button just to see what that would do to the photo. Here are the results: 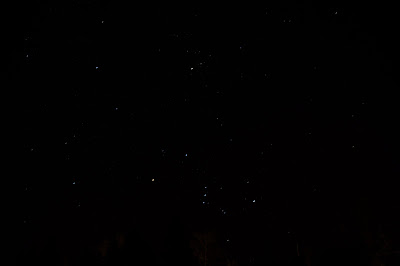 Before: that's Orion, rather small, at the bottom. The three stars stacked in a row are Orion's belt. The brightest on the left, that's Betelgeuse. It doesn't look too terribly red in this picture, but zoomed in it does. 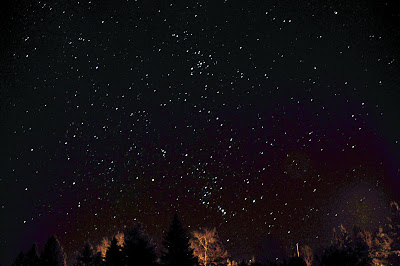 After: doesn't even look like the same picture, does it? Can you still find Orion's belt, those three stars in a row? His dagger, the three others in a row, closer together, descending at an angle from left to right below the belt, really show up now. And where did all those trees come from?!? Y'know, I didn't even see all these stars last night, and I was standing there staring at them. The street lights (there are several at this spot) drowned them out.

Here are a couple more "Quick Fixed" shots. They're both the same view, but each was shot at a different ISO, which explains the difference in color and light. The first one shows the sky as I saw it. And I really like the second one - it looks like some of the photos from outerspace! The glow in that shot is from Long Lake. 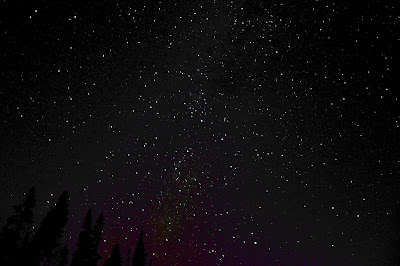 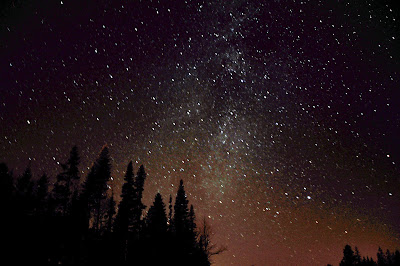 It's amazing what a little computer magic can do, eh?