It was a brisk 27 degrees Fahrenheit last night, according to my car's thermometer, as I stood out on the golf course trying to capture the night sky with my camera. It was about 9:30, and I was there until about 10:30. Not prime time to witness the Leonids (20-30/hour? Hardly.), but I did see about five. The camera didn't see any. My goal, however, was not the Leonids, but the stars en masse, because the night sky in the Adirondacks is breathtakingly beautiful. This proved to be easier said than done.
First, how do you focus when the only thing you see through the lens/viewfinder is pitch darkness? It took a few false starts to get that wrinkle ironed out.
Then, how do you get enough light to actually show up the stars? After about half an hour of highly questionable success, I figured my best bet was to set the camera for a faster ISO. So, I went from 200 to 800 to 1600 to 2600. Suddenly, stars were appearing in the images. Woo-hoo! 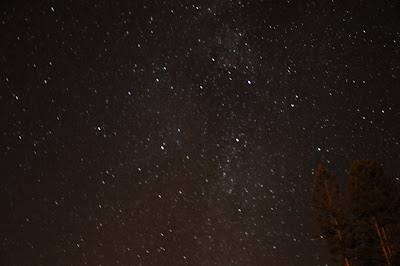 This here is the Milkyway.

The next wrinkle is going to be a bit more difficult to tackle. Y'see, the stars move. Okay, technically the Earth is moving, but for all intents and purposes, from our viewpoint, it's the stars. And even though we can stare and stare at the stars and never see them budge, the camera's eye is more sensitive, and those stars might as well be fidgety kids. Not a single photo came out with nice, crisp stars. I think the answer is going to be to jack the ISO to its most sensitive setting, and take shots with the fastest possible shutter speed. Yep - this means another night on the golf course. This time, however, I will bring a hat, coat and mittens. 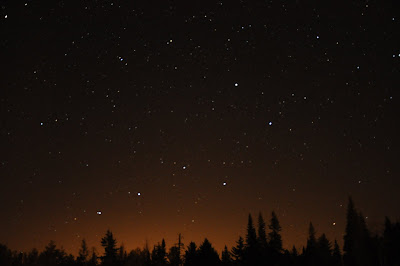 There she is, the Big Dipper, Ursa Major, the Quillwork Girl and her Seven Brothers. This was looking northward, towards Lake Placid. Now, from where I was standing, any glow from LP was hidden by the trees, and even when I have a clear line in that direction (as much as you can in Newcomb), the glow isn't really all that noticeable. Sure, you can make out LP, and Saranac Lake, Tupper Lake and Long Lake, but for the most part they are usually only faint, almost foggy, lights close to the horizon. Well...not to the camera. Why, you'd almost think there was a forest fire on the way!

Alrighty then. Tonight I will have all the time in the world. No chorus practice, no yoga class, no quilters' meetings. I'll feed everyone (dog, cat, boss's birds, me), walk the dog, and then load the camera and tripod into the car. And this time I think I will head out to the 8th fairway, away from all the lights (I didn't feel up to it last night). That should make the sky just a wee bit darker, and perhaps the stars will show up even better. Ooo - the fifth would be even better. Maybe I'll take a headlamp along...
Posted by Ellen Rathbone at 9:55 AM