First Snowshoe Hike of the Winter

The sun was out and so was I. It was time to strap on a pair of snowshoes and hit the VIC's trail system. A couple people had already broken trail earlier in the week, but I was the first staff to go out since the snow arrived.

My official goal this trip was to put up ski signs, but as always I made it a priority to look for animal tracks and other interesting signs of winter. I was surprised at just how much ice was on the water at the lake's outlet. A week ago it was raining and the only ice to be seen was on puddles first thing in the morning. 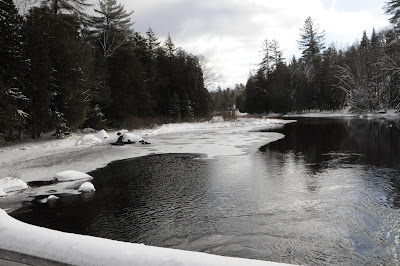 I was excited to see how the snow and ice had impacted The BeaverWorks, so I made them my first destination. The lower dam, next to the Sucker Brook Trail, is now really obvious: the snow-covered ridge of the dam stands out like a sore thumb. Normally, as in "pre-beaver", the Little Sucker Brook remained flowing along here most of the winter. Now we have sequential frozen ponds. 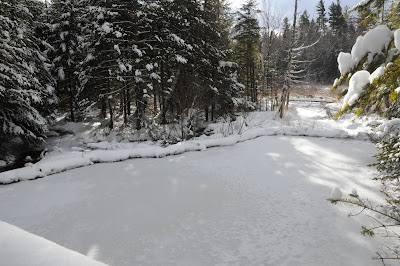 The front of the big dam has a suspicious "slide" on it. I suspect that instead of being a genuine slide, from an otter, for example, it is actually just a spot where the water kept flowing over the top of the dam, preventing snow from building up. There was no water flowing over it today. 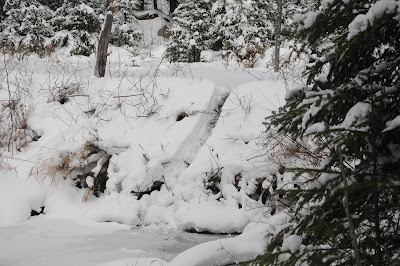 This is the view across the top of the big dam. I'm not sure I would trust my weight to the ice, but no doubt some small critters have already given it a try, and more will likely continue to do so as the winter wears on. 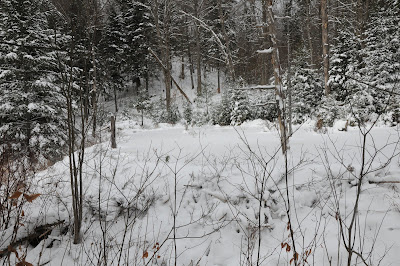 A week ago you could see the lodge and food pile across the pond. Nothin' doin' today, that's for sure. I hope the beavers are all snug in their home, for they are certainly frozen-in now. 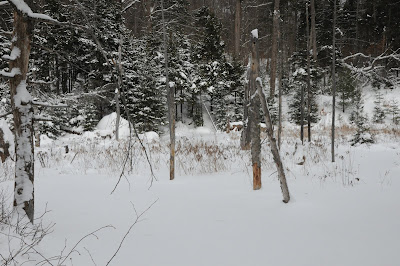 I had nothing with me that I could use to show scale, so you'll have to take my word for it that this hole was made by a red squirrel. Not only will they scamper along on top of the snow, but they will also tunnel right through it when the situation arises. 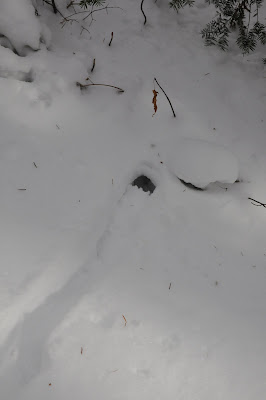 Mouse tracks were quite numerous. Note the tail drag, which makes them pretty easy to ID: 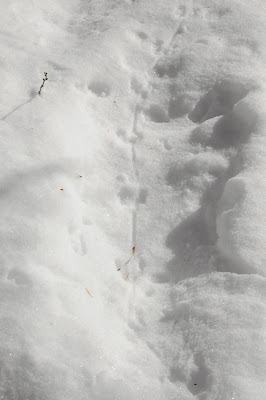 Ruffed grouse tracks are pretty hard to mistake for anything else. These chicken-like birds shuffle through the snow leaving pretty distinctive paths behind: 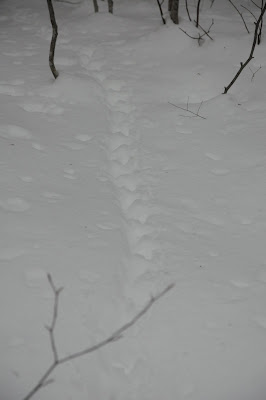 As I shuffled along the Sage Trail, I heard a loud whacking sound, and soon located a male hairy woodpecker working away at a tree. 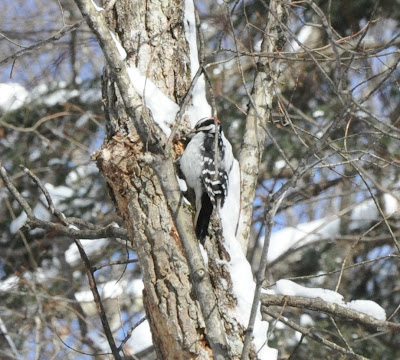 He was quite industrious, but the little tree in front kept getting in the way of a good photo! 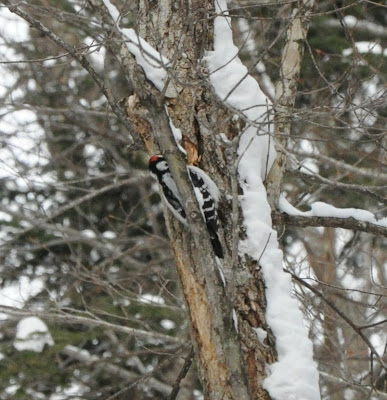 I finally moved off the trail so I could get a better view, but I must have gotten too close, for after about thirty seconds, he flew off to another tree, where I could hear his renewed search for food. 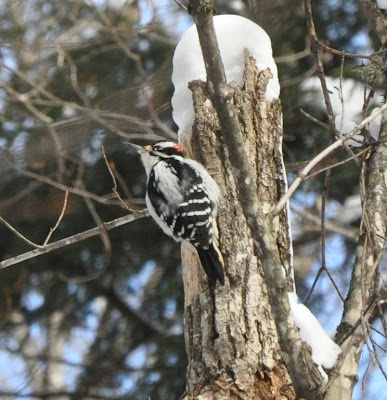 Next year's leaf buds were already green and swollen on the blackberries...just like the pussy willows in my yard last week. 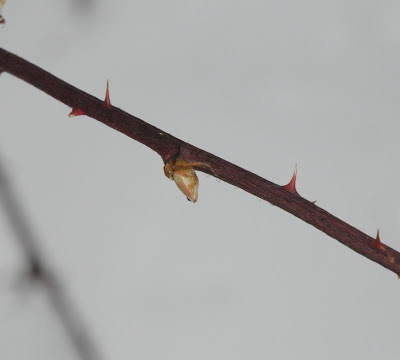 For the last few weeks, ash seeds have been obvious all over the ground. They continue to fall, for they are scattered on top of the snow now. I picked this one up and noticed noticed something rather odd about it: it has three "wings." In cross-section, it would look like a beechnut. 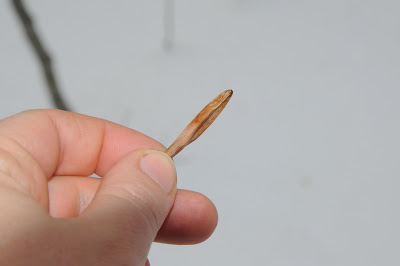 Normally, ash seeds are flat, having just the one papery "wing" above the seed. Here you can see a regular ash seed (on the left) next to the mutant one I found: 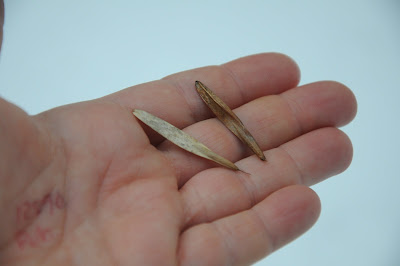 Why is this seed different?

At one point the snow was just covered with balsam fir seeds. Had they blown out of cones whose scales had opened? Or were they leftovers from a squirrel's meal? 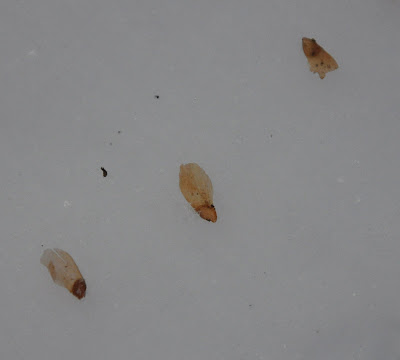 Some little critter, probably a squirrel, was flinging all sorts of debris from the hole at the base of this tree. 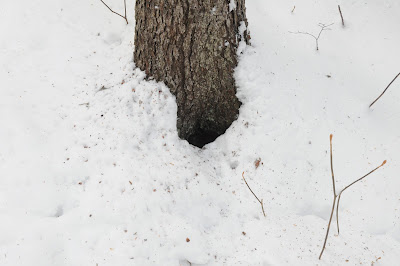 The snow was littered with seeds and cone scales. 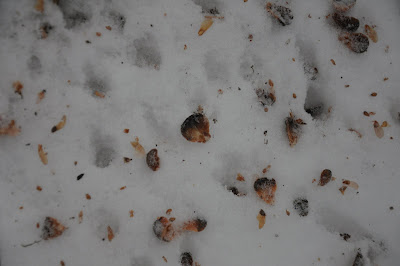 Looking carefully at the seeds and cone scales, I saw they were not only scattered on the ground at the base of the tree, but they were also stuck in the snow on the side of the tree. 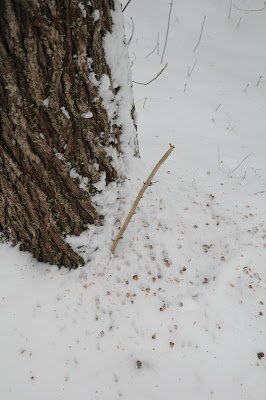 So the squirrel must've been snacking from up in the the branches, dropping debris below. 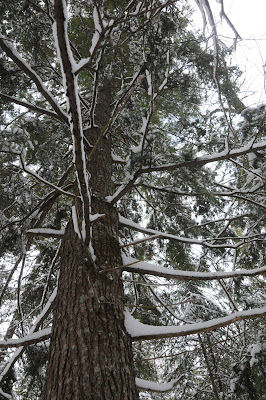 I ended my walk at the back deck, which was covered with wee little bird tracks; this set probably belongs to a chickadee. So there you have it: the first snowshoe hike of the season. Conditions are good, so all are invited to come and hike the trails at the Newcomb VIC!
Posted by Ellen Rathbone at 1:29 PM