Here I was, sitting in the office trying to identify a pixie cup lichen, when I heard a sudden muted rushing sound, reminiscent of snow coming off the roof. But we have no snow, on the roof or anywhere else (the dusting from this morning is all melted now).

Curiosity got the better of me. I craned my neck to look out the window, checking out the ground below the roof (just in case something else had come rushing off it, like leaves maybe).

And there, under the building (yes, for some strange reason our building was built on pillars - go figure), was a ruffed grouse (Bonasa umbellus): 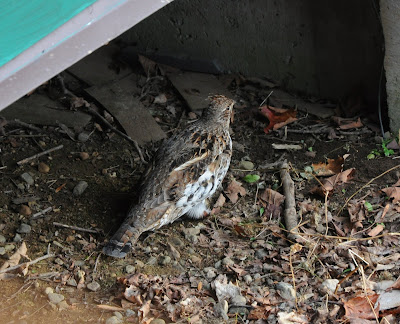 Lots of folks call these birds "ruffled" grouse, and this one is indeed looking a bit ruffled.

And it must've been this bird coming in for an abrupt landing that I heard, for I know that when a grouse takes off, its wings can make a thunderous sound. I wonder if it was cruising through the woods and suddenly encountered our building, slamming on the brakes so it didn't collide. Would that make the same rushing sound? I imagine so.

I grabbed the camera, opened the window ever so slowly, and snapped this shot. I reached down to move a mug out of the way so I could lean a little closer and get another shot, but when I looked up the bird was gone. This is why I prefer working with plants - they tend to not rush off at the slightest provocation.
Posted by Ellen Rathbone at 3:18 PM