Like much of the state, we had some strange weather this weekend.

Saturday, the rains came - over 3/4" by Sunday morning. I lay there in bed Saturday night/Sunday morning listening to it pour. I was mighty glad to be in a house, and not having to find shelter in the woods somehwere.

Sunday, however, dawned sunny and bright. It was downright mild. Saw a neighbor out in a t-shirt! A quick tour of the yard showed just how much rain we had. Y'see, I have one of those big blue plastic barrels under a seam in my gutters to catch the liquid that leaks out - sort of a modified rain barrel. This container holds, oh, maybe 40 gallons? 50? Well, Saturday morning, before the rains, I noticed it was maybe a quarter full - ice from past drips. When I looked at it Sunday morning, the ice was a good 5-6" above the rim! After several attempts, I was able to heave it over, dumping out the liquid and then lifting the container off the ice: 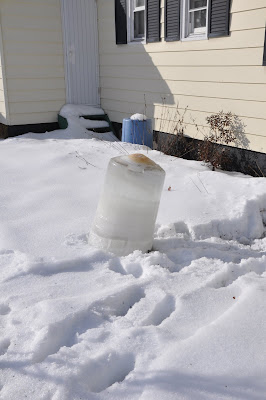 Pretty impressive, no? That's a heck of a lot of ice, and I can tell you that it weighs a ton!

I recieved some cute birdseed-men from my boss for X-mas, so they have been put out for the birds. The only animal I've seen show any interest so far, though, is Toby. 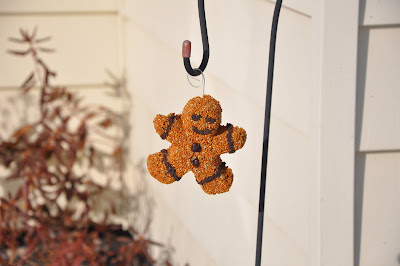 It was a beautiful day, so we walked down to the river. One neighbor took advantage of the soft and very-packy snow: 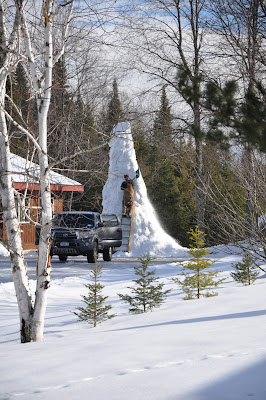 Every year he makes a giant snowman - says he does it for the kids on the school bus. Whatever the reason, it is impressive to behold. Frankly, I admire him for hauling shovelful after shovelful of heavy wet snow up the ladder!

We didn't encounter any interesting tracks on this walk, but I did see water vapor steaming off the side of a tree: 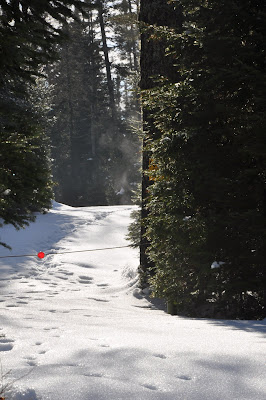 It was difficult to capture "on film", but I think you get the idea.
The roads, of course, had been turned to slush. Yuck. Toby was about as happy walking through this as I was. 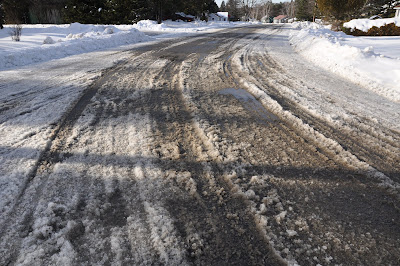 Oh, well - within 24 hours it had been replaced by snow. Yes, we got about five inches of very fluffy snow, starting sometime during the night and continuing until this morning. This was good, because the yard had become a crusty minefield, which neither Toby nor I wanted to cross. I packed down some of his trails while it was soggy, but the colder temps and the fluff have made the yard traversable once more.
And today we are back to sunshine! Everything is very white, thanks to the snow and the blustery winds, which plastered the snow against every vertical surface out there. But, as lovely as it looks, it is COLD! It was -5*F when I got to work, but with the winds gusting to over 40 mph, the windchill is much, much colder. It's now about noon and we've almost hit 1*F. I think I'll be enjoying the beauty through the protective layers of the office windows today.
Posted by Ellen Rathbone at 11:41 AM

Email ThisBlogThis!Share to TwitterShare to FacebookShare to Pinterest
Labels: winter