Night Time "Snow" and Snowshoeing in the Morning

Last night, after thinking earlier in the day that it's been quite some time since I saw a snow goose, I had an interesting encounter.

First, we (that would be the dog and I) were walking in the teeth of a gale along the highway (snow was horizontal in the air and across the ground) and I kept hearing this odd sound. I thought to myself "Is that a dog or a goose?" I couldn't see anything in the dark and the snow, so I kept going. As we were coming down the home stretch, I heard it again, and I thought "Is that a goose or some metal thing creaking in the wind?" I looked up, and there, in the dark, lit up by the orange glow of the street lights, was a "V" of snow geese. They were so low that had it been light out I could've counted their toes and seen all the details of their faces, without binocs! It was a small group, maybe 15 or so. A second, smaller flock flew crosswise above them. I was stunned.
A little bit later, as I stood in the back yard and Toby ran around barking, I heard more of them, but they were high enough in the dark and blizzard that I couldn't see them (although they certainly sounded close). Later on, as I was waiting for my ride to rehearsal (we have our first holiday concert tonight), I heard yet more of them. I was starting to think that maybe they were all the same flock or two, going in circles, but later I consulted with our local wildlife rehabber and bird nut, and she said that snow geese love this kind of weather. Who knew?
**********************
This morning, after our walk was cut short by some aggressive neighbor dogs, I strapped on the ol' snowshoes and set some trails in the yard for Toby. 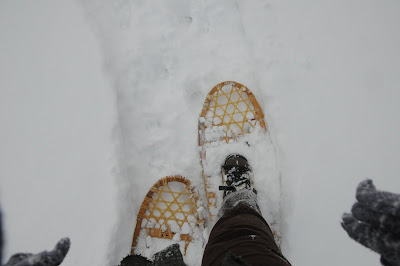 Once the snow gets deep (we have about 10 inches now, which is pretty darn deep when you walk on four legs and it about reaches your belly), Toby doesn't like to sashay forth much, so I help him out. 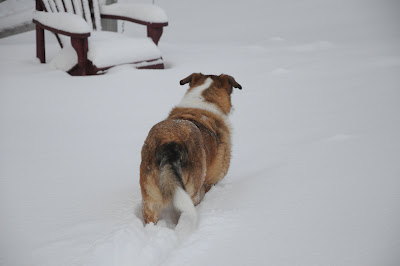 Over the course of the winter the trails get well packed and are easy for him to dash about on. It also makes things easier for me, like refilling the birdfeeders and the bird bath. 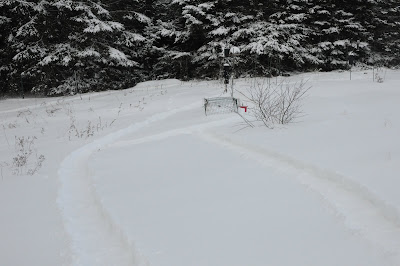 Sometimes, though, a good dash through deep snow is all one really needs! 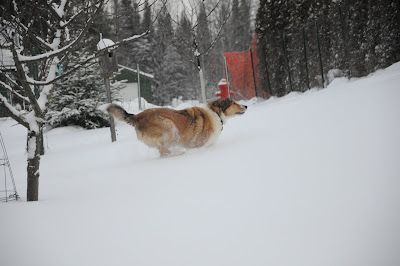 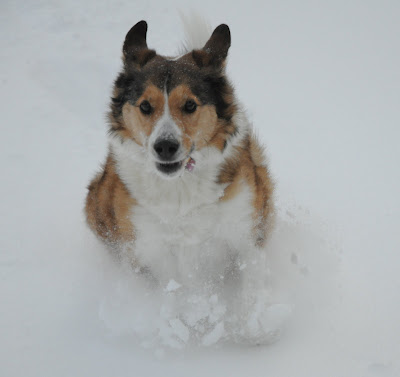 My snowshoes are the old wood and rawhide kind, 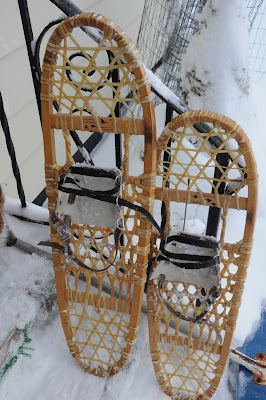 made by yours truly way back when I was an intern at Beaver Lake Nature Center. 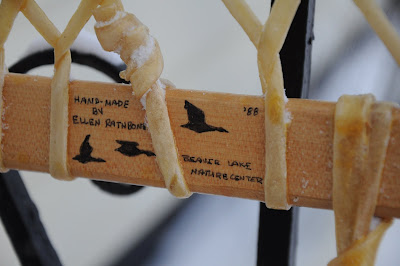 Every winter they had (do they still?) a snowshoe-making workshop or two. I learned how to make them in one workshop, and then taught the next one. They really are not difficult to do, especially since they come in a kit. Now-a-days, though, I suspect the kits come with neoprene instead of rawhide. You have to soak the rawhide to work with it, and it becomes a slimy mass, kind of like working with overcooked spaghetti, but I much prefer it to neoprene, which stretchs and frays as it ages. Rawhide has to be varnished to keep it from getting worn and wet with use, but I think it makes a nicer-looking snowshoe.

Of course, today most snowshoes are metal or plastic. We use plastic MSR snowshoes at work, and I must say that I do like them (except when the snow is crusty, at which point using plastic snowshoes is downright deafening). They are lightweight, have teeth on the bottom (they sure beat my old wood and rawhide ones for going up and down steep hills), and have the best bindings I have ever encountered on snowshoes (and I've seen and used a lot). I'd love to get a set of these bindings installed on my snowshoes...I wonder if I can. Hm...
Posted by Ellen Rathbone at 10:05 AM