Yesterday afternoon, upon returning from the vet's office (Toby had an appointment), I took the camera for a walk in the yard. The sun was out and lowering in a bright blue sky, casting long shadows with its orange glow. Because it was so beautiful outside, it was fairly easy (at least for a short while) to ignore the bitter winds (we had a high of 4*F yesterday).

The first thing that caught my eye was all the tracks around the feeders. Crows, I thought, without giving them a second glance. 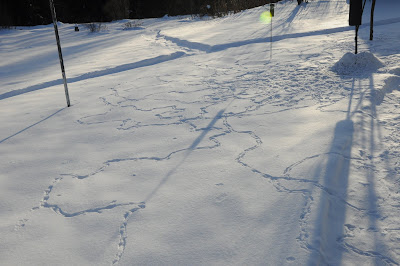 I moseyed across the yard, photographing dried flowers and shadows, 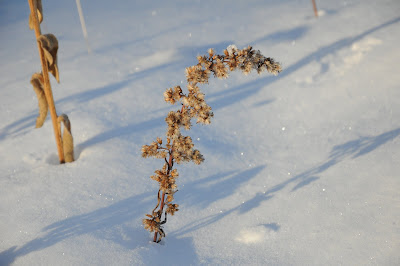 when a bird's voice grabbed my attention. It was a single note, and not one I recognized. Tew. I looked and looked, and finally gave up. As I continued walking, the note resumed. Determined, I started to scan all the tree tops. Finally I saw it: a bright white belly perched on the very tip of a balsam fir at the edge of the yard. (How do they manage to hang on?) 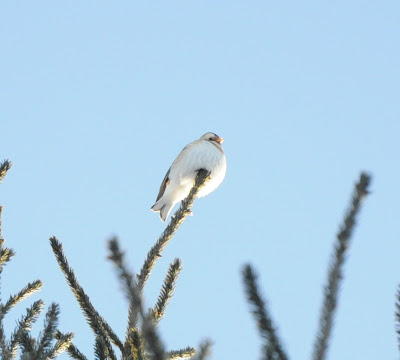 I moved around, trying to get a better angle, where I could see more than the bird's underpinnings. When I turned back towards the tree, it had flown away...of course.

But lo! and behold! it had landed in the cherry tree. So, I tried sneaking up on it. Eventually, I got an angle that was as good as it was going to get, and decided to try a video - maybe the bird would do something and I'd capture it "on film" and then be able to get a confirmation on its ID.

And there it is: the black tips on the wings when it fluttered! It was a snow bunting.

Later on, while back in the house warming up, I saw two snow buntings lurking under the feeders. It wasn't crow tracks I had seen, but bunting tracks! 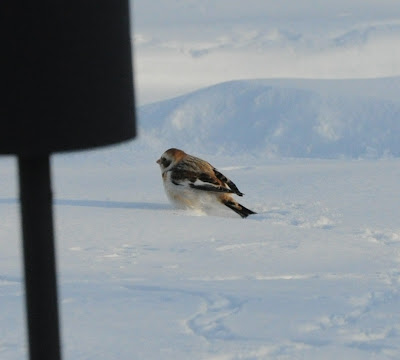 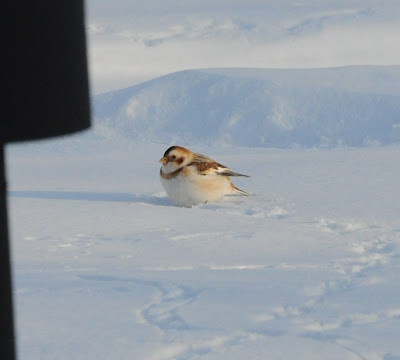 Snow buntings are very skittish birds (although at times not skittish enough - recall the hawk that took one out last winter), making them difficult to photograph. Photographing them through my window isn't a great option - the images are cloudy. So, I raise the window - and the birds fly off. And when one's dealing with near- or subzero temps (with our without a windchill), one really doesn't want to leave one's window open for extended periods of time.

So, I shoved the window upwards as quietly as possible, and the birds took off. I eventually tracked them down - sitting on the snowy roof of my neighbor's garage. They blended in so well that had they not moved, I never would've seen them. 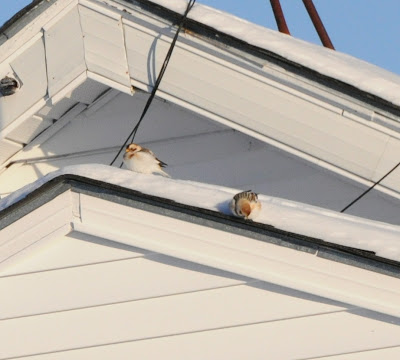 This morning they were back, with a bunch of their friends. The only pictures I could get were through the window. It was -10 and I didn't feel like letting what little heat the house had escape through an open window. 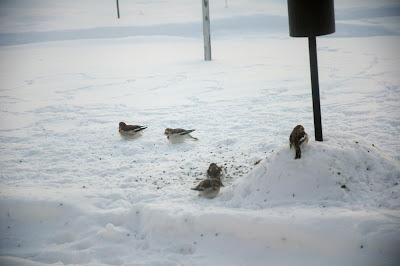 So, snow buntings...what can I tell you about Plectrophenax nivalis (aka: snowflake)? They are considered to be the largest of the buntings, and have the longest wingspan (twelve inches).

As one might guess from the color of the feathers, this is a bird that makes snow its home. It is a circumpolar species, an arctic specialist, occurring on land all around the northern parts of the northern hemisphere. The tundra is its stomping grounds, and it will winter further north than any other bird, with the exception of the raven. As a special adaptation for living in these brisk environs, the snow bunting has feathered tarsi, which are the part of the foot above the toes (you would probably consider the tarsus to be the ankle, but in truth, it is equivalent to the part of your foot that is the arch).

The male returns to the tundra in April (when temps of -30*F are not unheard of) to stake out a nest site. The early return is a reflection of the value of real estate, for these birds nest in rock crevices and the best sites are few and far between, resulting in some fierce competition. Those who get to the north first are more likely to get the best crevices, which provide the best protection from arctic predators.

The downside of these deep rocky abodes is that they are chilly, which can be deadly for developing eggs. To increase the odds of their progeny's survival, the female will remain on the nest incubating the eggs while the male brings her food.

And what are these little black and white birds eating? From late fall through early spring, their diet consists of seeds from grasses and "weeds." Once the warmer weather hits, buds and invertebrates are added to the diet. It's no wonder, then, that when the snowflakes arrive in our area in the fall that they will hang out beneath the bird feeders. To help them out, I sprinkled some sunflower seeds on the snow this morning, so they wouldn't have to wait for the rejects flicked from the feeders by goldfinches, chickadees, and grosbeaks.

Are snow bunting populations doing well? It depends on who you read, but according to Audubon, their numbers have decreased 64% in the last 40 years. Climate change is labelled as the primary cause.

We see snow buntings in fits and spurts here in Newcomb. They may arrive in the fall, or not. They may be around for a few days, or a couple weeks. They are not a species upon which I would set my clocks - their arrivals and departures are not dependable (like woodcocks and bluebirds). Perhaps this is why their appearances are so delightful - a little gift on a cold, wintry day.

Posted by Ellen Rathbone at 9:43 AM